As 2018 grinds to a halt, it’s time to take a step back and look the year that was. In accordance with tradition, I’ll take a deep dive into the books I’ve read (as well as the movies I’ve watched and beers I’ve drank, though those will have to wait). I keep track of my reading at Goodreads (we should be friends there), and they have a bunch of fancy statistical visualization tools that give a nice overview of my reading habits over time, especially now that I’ve been doing so for 9 years. This year, they’ve even introduced a couple new graphs, which will be fun. Starting off simple though, with the total number of “books” read: 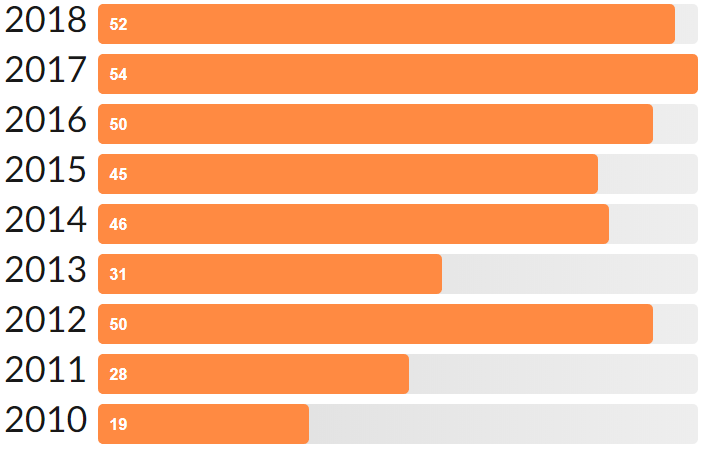 I read 52 books in 2018, which is just two shy of the record I set last year (and still the second best year in recorded history (i.e. the last 9 years)). It’s worth noting that a fair amount of these titles are actually short fiction, but we’ll get more into that later. Full list of titles here. Also of note, a significant amount of these were audiobooks, which sometimes feels like cheating. These disclaimers also applied to last year’s record-setting run, so I feel like I did alright, especially considering the next way to slice reading, where I did set a new record – total number of pages read: 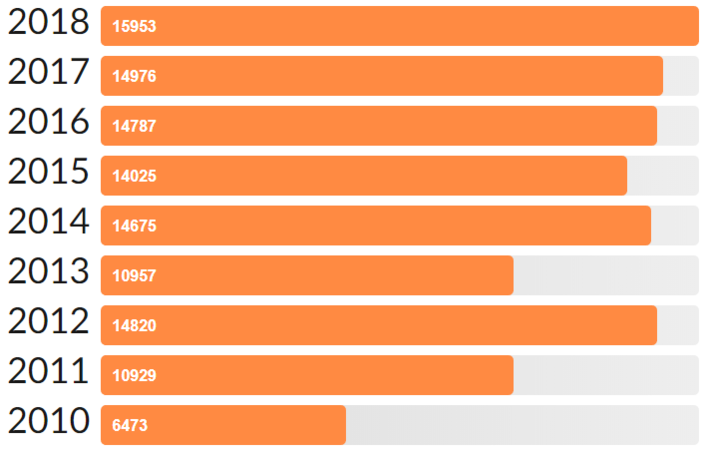 It’s important to note the inherent variability of page numbers, but I managed to exceed the previous record by almost a thousand pages, which ain’t too shabby (last year’s record setting total was only about 100 pages more than the previous record). Some additional info: 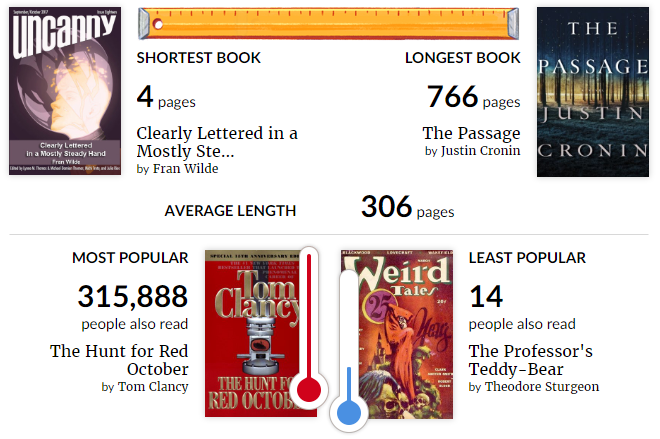 While I did read short fiction this year, which does indeed help to inflate “book” totals, the average book length this year was 306 pages – a huge improvement over last year’s 279 pages. This means that I read lots of longer books (i.e. 500+ page books) to make up for the handful of short stories (and to a lesser extent, the 150 page novellas). The record for average book length was set in 2013, a year in which I specifically and intentionally set out to read massive doorstops (and even then, the average was 356 pages). The longest book I read all year was Justin Cronin’s The Passage at a respectable 766 pages (though a far cry from my record, which is somewhere in the 1000+ page range).

The pie chart breaks things down a bit further, though it’s a weird graph due to the dumb way I categorize stuff on Goodreads (i.e. fiction, short story, and novella contain lots of overlap, non-fiction has no overlap). Still, roughly on par with previous years in terms of short fiction, with a mild increase in both novellas and non-fiction. 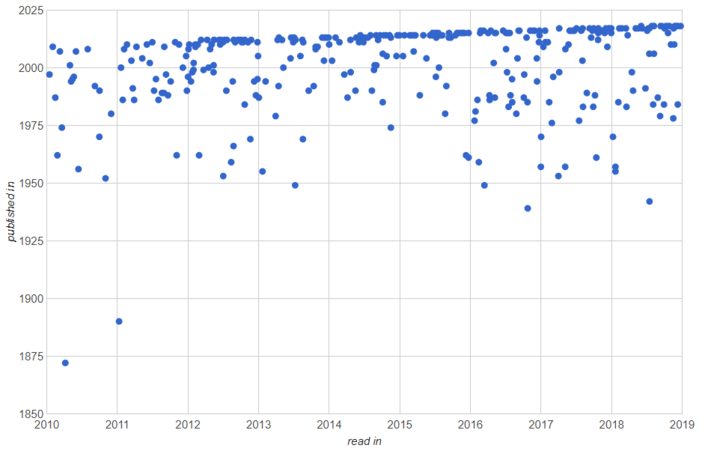 In terms of publication dates, I curse myself every year for having read Alice in Wonderland and The Picture of Dorian Gray in 2010, thus stretching out the vertical axis of this graph. I’ve done a decent enough job spreading out my reading, though there’s still a big recency bias here, probably owing to my participation in the Hugo Awards as well as generally keeping up with favorite authors. These things happen, but as it turns out, January is Vintage SF Month, so I will most certainly hit some older stuff that month (as well as the rest of the year). 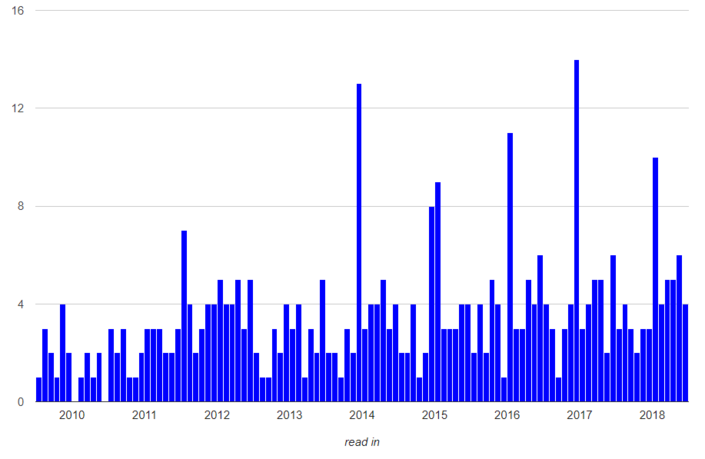 Ohhh, new graph! This one is for books over time (with a monthly period), which sounds great, but ends up producing weird spikes when I finish books at the beginning of a given month or when I read through, for example, the short story category of the Hugos. Still, it’s neat, and I always grumble about wanting more visualizations, so this is welcome. 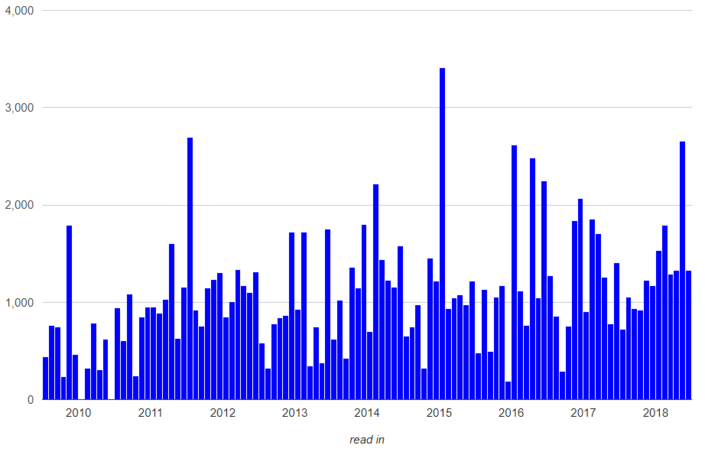 As is this one, which is page numbers over time. Alas, it falls prey to the same issue as the books over time graph, and indeed, books that I slowly read over several months get all their pages attributed to the month in which I complete something, which creates some of these spikes. I think there are ways to log progress throughout reading, but that might be too much manual effort for even me (though it would be interesting).

Some more assorted observations on the year’s reading:

And that about covers it. Stay tuned for a overall movie recap, followed by the traditional onslaught of the Kaedrin Movie Awards. Sprinkled in there will be some reviews for Vintage SF Month, because I’m looking forward to that…