That about wraps it up for the Atari 2600. Have I missed anything? Drop a comment below…

There are, of course, many great games for the Atari 2600. Some (like Pitfall II) have aged better than others, but there is a certain sentimental value to be had in even the most mind-numbingly repetitive of these games. As I’ve mentioned before, most games have a completely arbitrary goal set for you, usually having to do with a score or time. This can get tiresome, but back in the day, they were still a whole lot of fun. In reality, it’s actually pretty impressive, considering that most of these games were about 2k – 4k in size. Here are some of my other favorite Atari games:

Well, I think that just about does it for the Atari 2600 games. One final caveat, I’m sure there are plenty of great games that I’m missing on my list, but this is a) a subjective list and b) limited to my experience playing video games as a youth. As it turns out, many of the old standbys (Space Invaders, Pac-man, etc…) just didn’t make that much of an impression on me. The games above did, even if they were clones of other popular games (like Chopper Command and Enduro). Anyway, expect another Atari post or two to wrap up. I may be taking a bit of a break before I start on the next system (the classic Commodore 64 – not technically a console, but a vehicle for many hours of game playing as a young’un). I like taking this stroll down memory lane, but I don’t want to completely jam the blog with all video game posts…

Perhaps I’ve gone too far. I’m in an underground cavern beneath Peru. It seems to be a complex maze, perhaps eight chambers wide and over three times as deep. Niece Rhonda has disappeared, along with Quickclaw, our cowardly cat. I am beset by all manner of subterranean creatures in this vast, ancient labrynth. And all because of a rock–the Raj diamond. It was stolen a century ago, and hidden here.

– An excerpt from Pitfall Harry’s diary 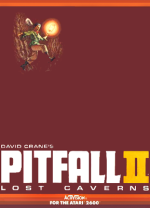 Without a doubt, the greatest game ever made for the Atari 2600 was Pitfall II: Lost Caverns. The original Pitfall! set the standard for Atari adventure games as it sent our intrepid hero, an Indiana Jones clone named Pitfall Harry, to a junge where he must avoid the likes of scorpions, crocodiles quicksand and tar pits (amongst other things). The goal of the first game was simply to collect 32 bars of gold in 20 minutes without dying 3 times, a typical Atari-era video game goal. The sequel improves upon nearly every aspect of the original game and far surpasses the competition.

To start, the game actually has a legitimate goal, not some arbitrary point score. Your goal is to collect the Raj diamond, rescue your niece Rhonda and also your cowardly cat Quickclaw (with an added bonus for collecting a rare rat and the usual gold bars). What’s more, you are given an infinite amount of lives and time with which to accomplish these goals (there are scattered checkpoints and when you die, you are transported back to the last one you reached, deducting points as you go). You’re given a few new abilities (like the ability to swim) and you face a new series of hazards, including poisonous frogs, bats, condors and electric eels.

From a technological standpoint, Pitfall II pushed the envelope both visually and musically. It was one of the largest games ever created for the 2600 (a whopping 10k), and it included features like smooth scrolling, an expansive map, relatively high-resolution graphics, varying scenery, detailed animations and a first-rate musical score that was detailed and varied (quite an accomplishment considering that most 2600 games did not feature music at all). Obviously, all of these things are trivial by current standards, but at the time, this was an astounding feat. Indeed, it was only made possible because of custom hardware built inside the game cartridge that enhanced the 2600’s video and audio capabilities.

You start the game in the jungle. In a perverse maneuver, the game’s designers made sure that you could see Quickclaw (one of your primary objectives) immediately beneath your starting point, but to actually reach him you must traverse the entire map! 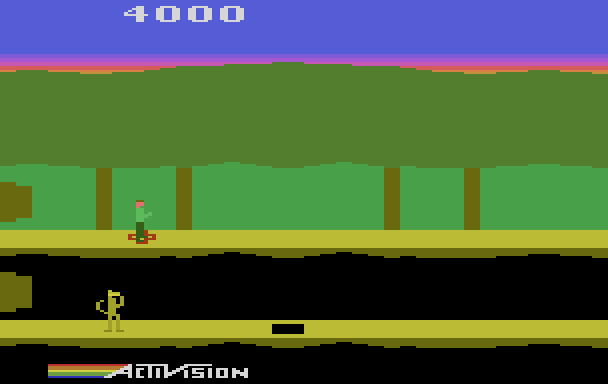 So close, yet so far away…

Again, the sequel imbues Pitfall Harry with a few extra abilities, including the ability to swim. Naturally, this benefit does not come without danger, as shown by the electric eel swimming along side our hero (you can’t see it in the screenshot, but the eel alternates between a white squiggly line and a black squiggly line, thus conveying it’s electric nature). Also of note is the rather nice graphical element of the waterfall. 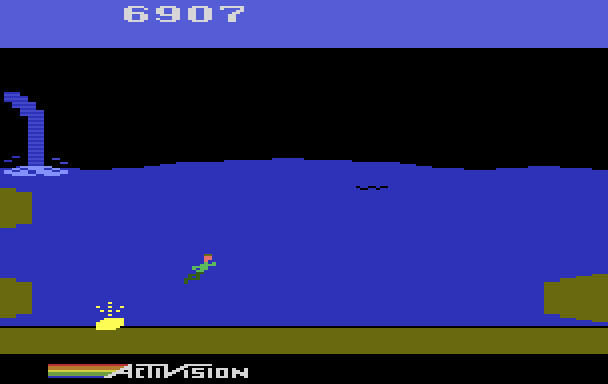 Swimming with an electric eel

As you explore the caverns, you run across various checkpoints marked with a cross. When you touch a cross, it becomes your new starting point whenever you die. 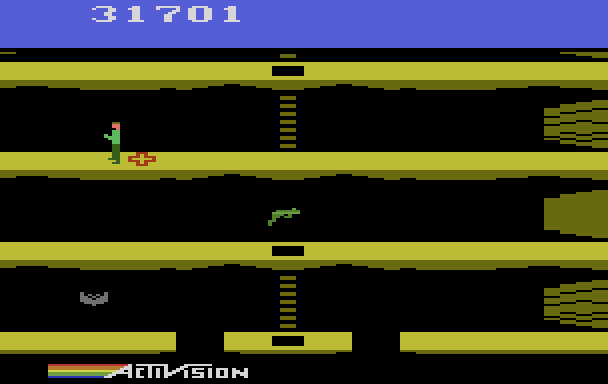 I think that green thing is supposed to be a poison frog.

At various points in the game you are faced with a huge, vertical open space. Sometimes you just have to jump. One of the great things about this game, though, is that there is a surprising amount of freedom of movement. You could, if you wanted, just take the ladder down to the bottom of the cavern instead of jumping (though at one point, if you want to get the Raj ring, you’ll need to face the abyss). Plus, there are all sorts of gold bars hidden around the caves in places that you don’t have to go. Obviously, there are a limited number of specific paths you can take – it’s no GTA III – but given the constraints at the time, this was a neat aspect of the game. 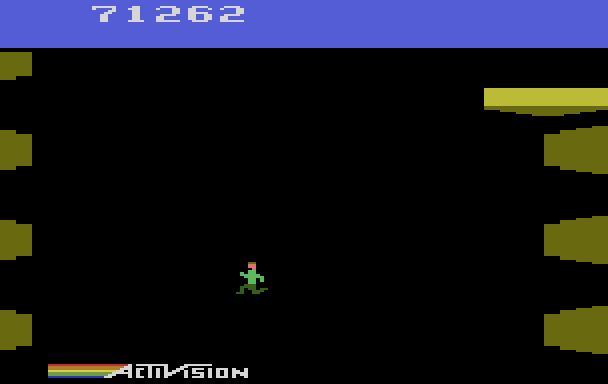 Stepping into the abyss

Another innovation in Pitfall II is Harry’s ability to grab onto a rising balloon and ride it to the top of the cavern (a necessary step at one point), dodging bats along the way. A pretty unique and exciting sequence for its time. 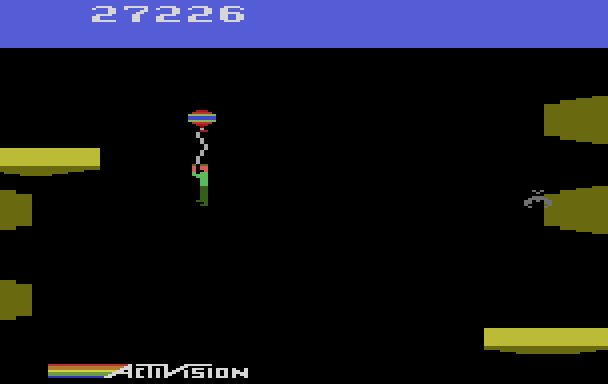 That’s some powerful helium in that balloon

The valiant Pitfall Harry, about to rescue his neice Rhonda. 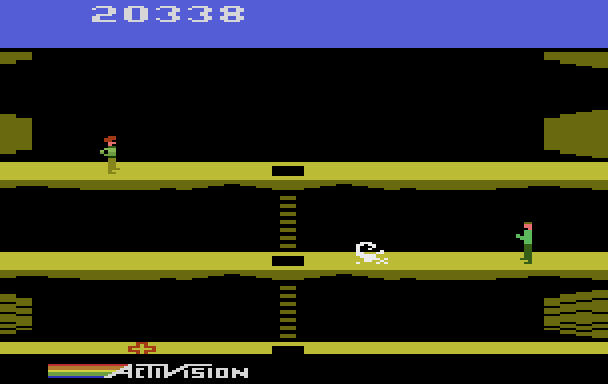 The designers’ cruel sense of placement strikes again. I can see the Raj diamond, but how do you get there? Luckily, the game’s freedom of movement allows you to backtrack if you want (and when you want). 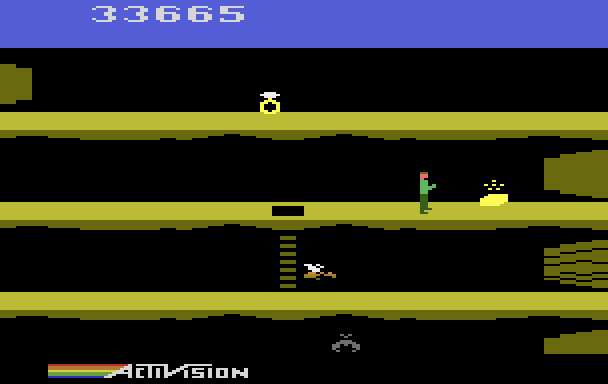 The final portion of the map is still, to this day, challenging. Up until this point in the game, you’ve only had to dogde a bat here, a condor there. This section requires you to really get your timing and reflexes in order, as you must complete a long sequence of evasions before you get to the top. Nevertheless, success was imminent. 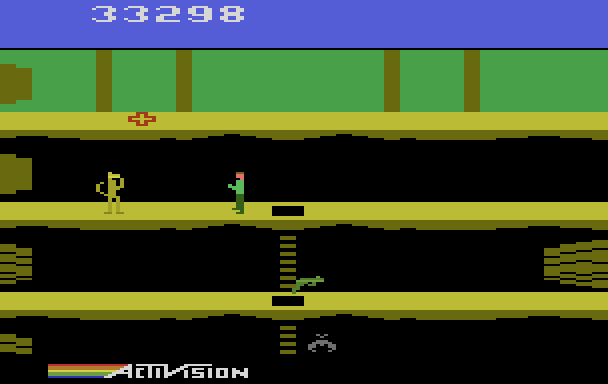 Naturally, the game does not hold water compared to the games of today in terms of technology or gameplay, but what is remarkable about this game is how close it got. And that it did so at a time when many of these concepts were unheard-of. Sure, there are still some elements taken from the “Do it again, stupid” school of game design, but given the constraints of the 6 year old hardware and the fact that nearly every other game ever released for the console was much worse in this respect, I think it’s worth cutting the game some slack (plus, as Shamus notes in the referenced post, these sorts of things are still common today!)

Everything about this game, from the packaging and manual (which is actually an excellent document done in the style of Pitfall Harry’s aformentioned diary) to the graphics and music to the innovative gameplay and freedom of movement, is exceptional. Without a doubt, my favorite game for the 2600. Stay tuned for the honorable mentions!

Samael’s recent Mario Marathon of Madness put me in a nostalgic mood. I started thinking about my history of playing video games. These days I don’t do much gaming (with occassional exceptions), but when I was younger, I certainly did. So I figure I’ll write a series of posts about my favorite games for all the various platforms I’ve played on, starting with the glorious Atari 2600.

Technically, the 2600 was not my family’s first gaming system. I do remember a strange console that had two paddles and could only play Pong. I’ll have to see if I can dig that up. In any case, in looking at the history of the 2600, I don’t think I really started playing until after the video game crash of 1983. I suspect this is partly because prices fell dramatically and thus made it that much easier to convince the parents to purchase them (plus, my brother is 4 years older than I, so he had already built up a collection of games).

In any case, you gotta love the 2600, with it’s awkward single-button controllers, faux wood panelling console, and huge library of games (yeah, most were clones of popular games like Pac Man, but so what?). The default controllers were awful, but I remember when my brother managed to get his hands on a pair of Epyx 500XJ Joysticks. These unique controllers were more responsive, fit ergonomically and comfortably in the palm of your hand, and as a bonus, could also be used with the Commodore 64/128 (which will be the next system in my series).

The games will be covered in separate posts, but I will say that while they were fun at the time, I can see why people lost interest until the NES. Most games primarily involved manipulating various elements on the screen to get a higher score. Period. There really weren’t any goals other than running the score up as high as possible (there were exceptions to this which will be covered in later posts). That said, I recently downloaded an emulator and started playing some of these games again, and it instilled a powerful sense of nostalgia. These games bring back a lot of memories! And there are so many of them. Again, my favorite games will be reviewed in separate posts, so stay tuned!