Filling in some of the holes in my movie viewing history, I recently watched Alfred Hitchcock’s classic, Notorious. As Roger Ebert notes, it “contains some of the most effective camera shots in his–or anyone’s–work” and so I figured let’s take a closer look at some of those great shots. Some are more famous than others, and I’m certainly going to leave off a few, but this should be interesting.

Major spoilers ahead, mostly below the fold.

First up is a minor shot, not really significant among the Notorious scenes, but more significant of Hitchcock’s work as a whole. Many of Hitchcock’s films indirectly employed the use of voyeuristic framing to make the viewer feel like they are witnessing the events portrayed on screen. The shot below is literally framed in a doorway, and the distance from the actors implies that we’re not supposed to be there. It’s an unsettling technique, one which Hitchcock would reprise effectively in his later classics Psycho and Rear Window. This dynamic is reversed in Notorious during the final shot of the film in which our villain is called back to his house to meet a fate we are only left to imagine, as Hitchock closes the door. Interestingly, both approaches can be upsetting: one because we see something we think we shouldn’t, another because we fill in the blanks with our imagination. 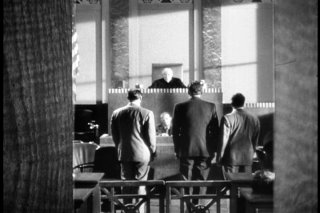 More screens, commentary, and spoilers below the fold…

My little Hitchcock marathon continues with the 1934 thriller, The Man Who Knew Too Much. This was a breakthrough international success and it was also critically acclaimed as a new high in suspense films. However, while this film exhibits much more of a mastery of technique than his previous efforts, it’s still not indicative of his later brilliance. There are many great scenes and great shots in this movie, but the plotting and pacing problems that plagued his other early films are still in evidence (although there was a big improvement). The plot has enormous holes in it, but the themes and conventions are pure Hitchcock and it’s not without a certain sense of charm.

The story concerns a married couple vacationing in the Alps with their daughter. They’re befriended by a French man who, naturally, is shot. It turns out that the man was a spy, and just before he dies, he tells the couple of a plot to assassinate an important diplomat in London. To keep the couple from talking to the police, the assassins kidnap the couple’s daughter and hold her hostage. The movie is filled with excellent scenes and shots, but the plot holes hold the film back from total brilliance. Spoilers, screenshots and more below!

The film also displays some Hitchcockian humor, something that was somewhat lacking in his previous films. For instance, there’s a clever sequence towards the beginning of the film involving a group of people on a dancefloor that get tangled up in string. Later, a scene at a dentist’s office approaches slapstick. 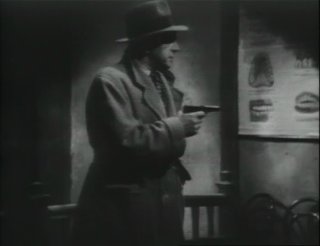 I always bring a gun to the dentist’s office.

A hilarious scene at a church approaches downright silliness as the father and his friend attempt to communicate by singing plot points to each other to the tune of the hymns (thereby disguising their conversation from their fellow churchgoers). 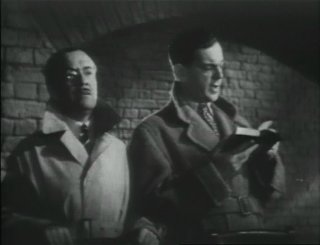 We must sing the plot now, so as not to be detected.

Later, the father’s friend gets hypnotized by the head of this (rather strange) Church. Naturally, she’s in league with the assassins. 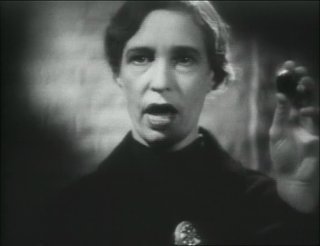 She’s not as good as hypnotoad, but she’ll do.

Cornered by the criminals at the Church, our hero starts a… chair fight. This sequence is literally minutes long, as our hero throws chairs at the criminals, who decide not to use their guns to return fire, but to throw chairs back at the hero instead. By the way, it’s not clear in the screenshot below, but if you look closely, you can see that the man has a cigarette in his mouth. That’s right, he initiates this chair fight with a cigarette dangling from his mouth. 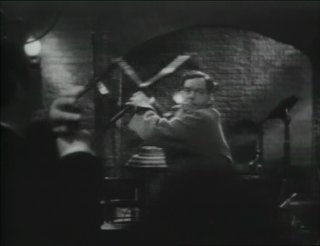 The assassin was expertly played by Peter Lorre, in his first English speaking role. Cheerfully chewing scenery and smoking like a chimney, his presence helps give the film a large portion of its charm. A testament to how a great villain can elevate a movie… 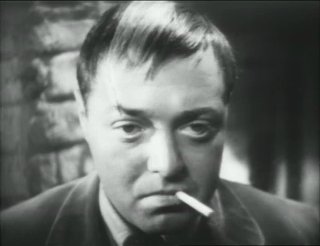 I am Peter Lorre, hear me roar.

One of the most memorable sequences in the film is when the assassins make their move on the diplomat. The shooter times his shot with a key portion of the music at a concert, and Hitchcock employs a brilliant dissolve from the orchestra to the gun (the screenshots below don’t do it justice).

Believe it or not, our heroine manages to help foil the assassination attempt, and the police are able to follow the shooter back to his group’s hideout (the aforementioned Church). This leads to a siege and eventual shootout, which was apparently based on Siege of Sidney Street, a notorious real-life gunfight in London’s East End in 1911. 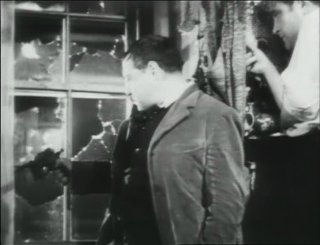 Didn’t you hear me, I am Peter Lorre! Rarr!

The film ends with the daughter escaping to the roof, chased by this pleasant fellow: 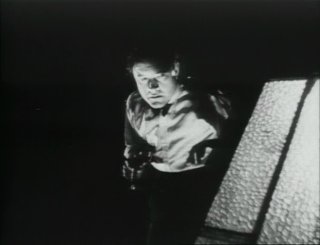 I’m nowhere near as cool as Peter Lorre.

Once again, we’ve got a film which shows flashes of Hitch’s future brilliance without being, in itself, brilliant. Still, there’s much more substance here than in the previous films in my marathon. It’s an archetype of his later work and indeed, Hitchcock remade the film nearly 20 years later (though critics disagree about which version is better).

Update: You can download the movie at the Internet Archive!

A little while ago, I came into the possession of a collection of 9 early Alfred Hitchcock films (i.e. 1920s and 1930s, his pre-Hollywood films). Since Cinecast (a film podcast) was doing a Hitchcock Marathon, I decided to play along in a manner of speaking (the major difference being that I’m going to watch more than the 6 films they’ve selected… in fact, the only film on their list that’s currently in my collection is The 39 Steps).

I started my marathon with one of Hitchcock’s first efforts, a 1926 silent film called The Lodger. I enjoyed the film a lot, though it had a lot to do with the context and conventions of silent films. Moving in chronological order, I’ve progressed through three more films: Blackmail, Rich and Strange, and Number 17.

More thoughts on all three, including Spoilers as well as a few screenshots (with the typical sarcastic captions) below the fold…

Browsing the discount DVD rack while doing a little last-minute shopping, I came across this collection of 9 Hitchcock films for a measly $8. I love Hitchcock, yet I haven’t seen many of his films (and he was an extremely prolific director), so I picked it up. It turns out that all of the films on the DVDs are from Hitchcock’s pre-Hollywood period, dating from the mid 1920s to the late 1930s. It even includes a 1927 silent film, among Hitchcock’s first efforts, called The Lodger.

By today’s standards (or even the standards set by Hitchcock’s later work), it’s not especially impressive, but I haven’t seen much in the way of silent films, so this particular movie intrigued me. The conventions of silent films are different enough from what we’re all familiar with that it almost seems like a different medium. The film moves at a very deliberate pace, revealing information slowly in many varied ways (though, it seems, rarely through dialogue). In fact, I even played around with watching the film at 2X speed and didn’t have any problem keeping up with what was happening on screen. Not having any real experience with silent films, I don’t know if this (or any other aspect of the movie) was unusual or not, but it seemed to work well enough.

Details, screenshots, sarcasm and more below the fold.

Also Spoilers, but if you’re up for it, you can watch the movie at World Cinema Online…