The usual dump of links from the depths of ye olde internets:

King’s appearance in an auditorium on the K-State campus had several hundred people in it, and it took place on a foggy night. When he took the stage, King noted that it was spooky weather, like one of his novels. Then he started speculating that it was the kind of night that a homicidal escapee from a mental asylum might be running around in. The crowd laughed. King continued that the maniac was probably out in the parking lot, checking cars to see if any were unlocked. The crowd loved it. Stephen King was telling us a creepy story on a foggy October night. How cool was that? King kept talking, adding details about the maniac and the knife he picked up somewhere. The crowd grew a bit uneasy but was still chuckling.

Then Uncle Steve started in on asking us if we were sure, REALLY sure, that we had locked our cars. You thought you did, but do you actually remember doing it? By then, the crowd had fallen silent. By the time King described the maniac finding an unlocked car, everyone was on the edge of their seat. Say what you will about the man, he took a brightly lit auditorium full of laughing cheering people and creeped the living shit out of everyone in it in about two minutes. And when I left, I checked my backseat before getting it, and I wasn’t the only one in the parking lot who did.

That’s all for now…

I have long been a fan of John Carpenter’s Christine and consider it his most underrated work. I had not read Stephen King’s novel of the same name until now, and while it’s hard to call any Stephen King work underrated, it doesn’t seem to come up as one of his most popular books either (call it top of the middle tier King?) As an adaptation, Carpenter’s film makes drastic changes while retaining the basic themes and shape of King’s story.

The changes are apparent immediately, as the movie starts in a car factory where a red 1958 Plymouth Fury is being constructed. As it rolls down the assembly line, an “accident” mars one of the workers. Soon after, another worker enters the car and promptly dies. This does an effective job of setting the car up as some sort of inherently evil presence that is nonetheless able to attract certain types of people. The book begins when the car is sold to teenage dork Arnie Cunningham two decades later, and the car’s malevolence is driven more by its previous owner than the car itself. It’s a key change, but one that I think works well enough.

The aforementioned dork, Arnie Cunningham, spies a dirty and broken-down version of the car, but with a for-sale sign in the window. He immediately falls in the love with the car (which is named Christine, of course), takes it to a shop to fix it up, and starts to act very differently with his family and even his best friend Dennis. He finds confidence in his new purchase, which allows him to ask out the new girl in school, but also leads to a more hot-headed, dismissive attitude in day-to-day interactions. The car makes him feel stronger, but he’s really just becoming more cruel and mean. Also, it seems that Christine has fallen in love with him as well, and has taken to prowling around at night all on her own, taking out various bullies who have threatened Arnie.

When laid out like this, it sounds like a silly premise and I guess that it is, but both King and Carpenter are able to ground the story in the mundane at first, only gradually introducing the more fanciful elements as the story proceeds. King has always had a knack for imbuing conventional, every-day perks of modern life with something more sinister. Here, it’s a car. In The Shining, it’s a hotel. In Cujo, it’s a dog. And so on. There’s something archetypal about this sort of thing that King is able to capture, and that Carpenter is able to maintain in the adaptation.

Both versions of the story do a reasonable job portraying the superficial pleasures of teenage, suburban life. There’s a cynicism that underlies this that could be obnoxious, but both King and Carpenter are able to touch on these ideas without completely drowning the story in misery. As befits most fiction, the relationships and interactions are a bit exaggerated, but not so much that you can’t relate. Characters are flawed and not totally likable, but you can still empathize with them. 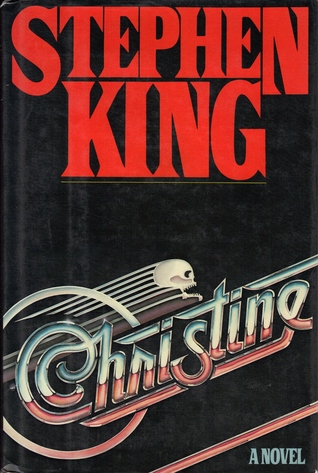 King’s book obviously allows much more time to establish Arnie and the gradual descent he undergoes as he’s driven by Christine (irony!) or, more accurately, her former owner, Roland D. LeBay. It never really drags, and King does a good job capturing the community and families involved as well as the main characters. We get a lot more about Christine’s previous owner and his troubled history (before and after the car). Arnie begins to talk like him, act like him, and Dennis even notices that Arnie’s signiture has changed (implying that he’s sort of possessed). Christine drives around by herself, but really it appears to be LeBay’s spirit that’s doing the driving, and as the story progresses and Christine picks up more power, people start to hallucinate in the car, even seeing things like the rotting corpse of LeBay.

Carpenter’s adaptation neatly simplifies all of this, directly imbuing the car with malevolence. It’s a choice that works while still allowing the movie to hit many of the same beats as the book. Obviously much of the story is cut out and that does have an impact, particularly when it comes to the third act, which does feel rushed. Still, Carpenter is able to cleverly devise visual treatments to emphasize Christine’s nature without resorting to anything particularly showy. Lots of steadicam shots, low angles, and great nighttime cinematography of headlights suddenly appearing in the darkness and so on. The car looks fantastic, and Carpenter lingers just long enough to let your mind wander. Are we, the audience, just as attracted to the car as Arnie? It’s a restrained but very effective approach. The use of music on the radio in the car can be a bit on the nose, but it’s a reasonable device to use for the medium and it’s not overdone. The sequence where Christine rebuilds herself, which relied on practical effects, is well conceived and perfectly executed (were this made today, I’m sure the inevitable reliance on CGI wouldn’t be nearly as effective).

Ultimately, this conforms to the standard book is better than the movie situation, but the movie does a good enough job to justify its existence and even ranks pretty highly among adaptations (King or otherwise). Given the size and scope of the book, I can’t imagine a better adaptation, and Carpenter’s formal precision and visual prowess nearly carries the day. The film falters in the finale, but manages to hold on well enough for non-book-readers. Still, I suspect even book-readers could appreciate the film, as I certainly did.