Another orbital period has passed, which means it’s time to recap the year or some such thing. I’m still catching up on movies, and I’ll be posting a recap of the year in beer in the next few days too, but let’s take a look at my reading for 2013 and see where I’m at. I keep track of my book reading at Goodreads, and they have some fancy statistic generator things (that isn’t anywhere near as detailed as I’d like, but hey, I’ll take what I can get). Since I’ve been using the site for a while now, I’ve got several years worth of stats to compare too.

So I’ve read 31 books in 2013, which looks like a significant decrease when compared to 2012, but that is a bit misleading too. I was reading solely for quantity in 2012, and I cheated a bit in that I read a bunch of short novellas and comic book collections. My original idea for 2013 was to only read super long epics, but that was perhaps too ambitious, so I just sorta read what I wanted, length be damned. Of course, book length is tricky to measure, but by any standard, the average length of books I read in 2013 was much higher than 2013. On the other hand, it appears I did read more overall in 2012:

Proportionally, it’s not as big a disparity, but it is still significant. It appears that reading super long epics does sorta take longer than reading three smaller books with an equivalent number of pages. That’s perhaps not strictly true, but longer books tend to meander, which means I tend to get bored and fall asleep earlier and thus not cover as much ground. 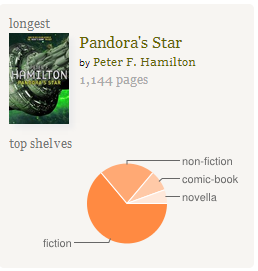 The perfect example of this is Pandora’s Star, the longest book I read in 2013 and the first in a bloated duo of books that are supremely longwinded. I don’t normally mind this, but those books tested even my patience (though I did enjoy them quite a bit in the end). All told, those two books alone account for almost 20% of my reading this year. Another epic of note that I read was Douglas R. Hofstadter’s monumental Godel, Escher, Bach: An Eternal Golden Braid. It clocks in at 832 pages, but it is some very dense, heady stuff, and it had been sitting on my shelf unread for about 5 years or so.

You can also see that I read a small portion of comic book collections and novellas in 2013 as well, but not as many as in 2012. Other stats of note:

Goodreads also provides a neat little gizmo that graphs publication dates, as such: 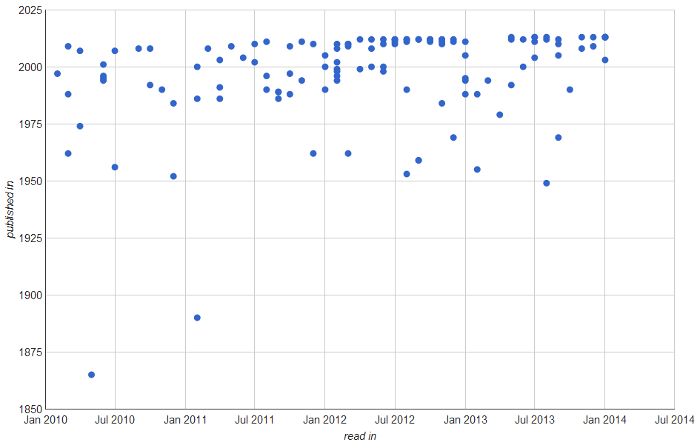 If you click the image above, you should be able to get a more interactive version of the graph, though I do find it annoying that it only states the publication date, not what book it is! The oldest book of the year was Leigh Brackett’s 1949 tale of Martian adventure, The Sword of Rhiannon (for those who don’t recognize the name, she was one of the screenwriters on for The Empire Strikes Back).

So it’s been a pretty good year for reading. I certainly didn’t get through as much as planned, and I definitely didn’t spend as much time reading in 2013, but I think I did pretty well. As for next year, I think I’m going to take a similar approach: read what I want, length be damned. I may also get off my arse and read all the Hugo nominated books this year, something I’ve always wanted to do. Indeed, I’m pretty sure that I’ve just read a book that will be nominated in Ann Leckie’s Ancillary Justice, but I’d also like to take a shot at the other (shorter) fiction categories. I’ll probably set my sights at a similar 30 books/11,000 pages rate for 2014, but who knows how things will go?

2 thoughts on “The Year in Books”