Basically, I forgot to do this and had other fish to fry at the beginning of the year, so enjoy this belated recap of books I read in 2019. I keep track of my reading at Goodreads (we should be friends there), and they have a bunch of fancy statistical visualization tools that give a nice overview of my reading habits over time, especially now that I’ve been doing so for… an entire decade! First up, a simple look at quantity of books read: 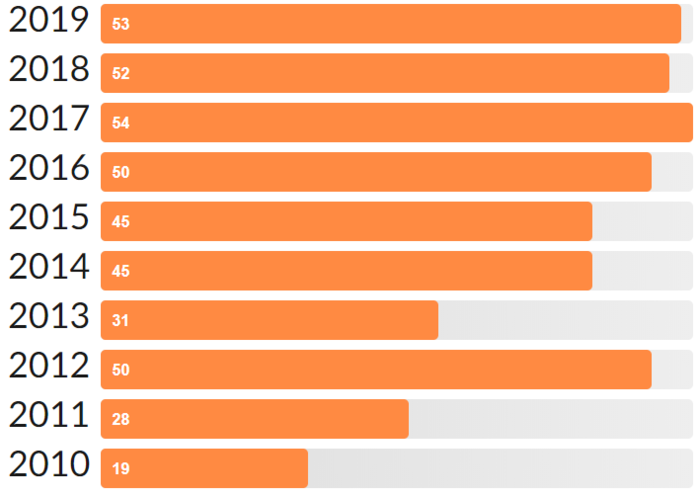 I read 53 books in 2019, just a hair behind the record of 54, set just two years ago (and second in recorded history (i.e. the last decade)). See the full list. It’s worth noting that a good portion of these are short fiction, novelles, etc…, owing to my participation in the Hugo Awards. I’m also including audiobooks, which feels a bit like cheating, but is also a pretty key way for me to consume books these days. Of course, these caveats also apply to previous years, so there is that. There is also this: 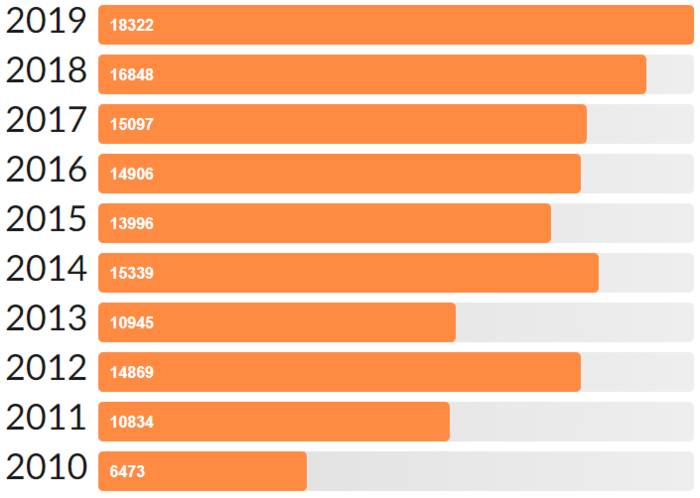 Even taking the inherent variability in page numbers into account, I blew the record out of the water, with nearly a two thousand page jump from last year’s record-setting run. Some more info: 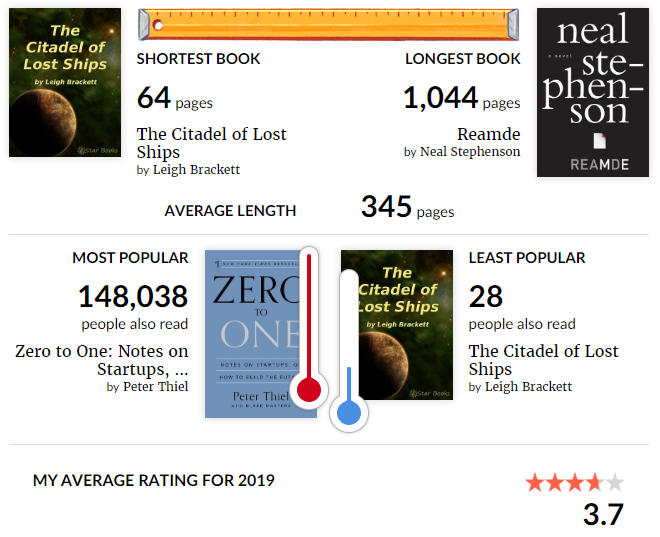 While I did read a bunch of short fiction this year, which inflates “book” totals, the average book length this year was a whopping 345 pages. This represents a huge improvement over last year’s 306 average pages, which was in itself a big improvement over the previous year’s 279 average pages. It’s still a few pages off the record, set in 2013, which was 356 pages (but then, that was only over 31 books), but it’s a pretty great showing. The longest book of the year was a reread of Neal Stephenson’s Reamde, clocking in at 1044 pages (done in anticipation of its quasi-sequel Fall; or, Dodge in Hell, itself nearly 900 pages). 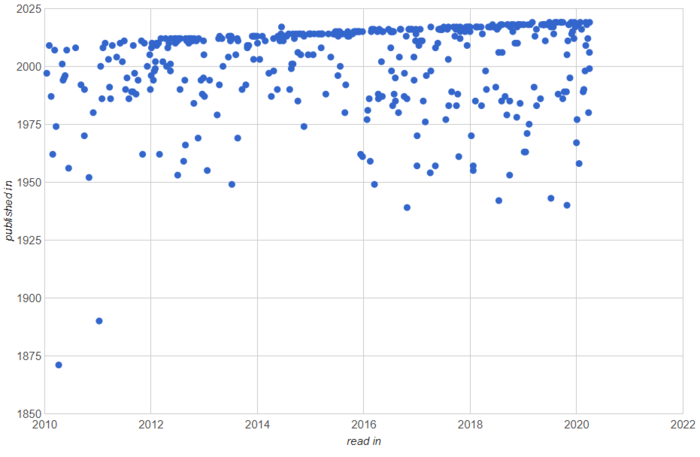 In terms of publication dates, I’m still annoyed at myself for having read Alice in Wonderland and The Picture of Dorian Gray in 2010, thus stretching out the vertical axis of this graph. I’ve done a decent enough job spreading out my reading, though there’s still a big recency bias here, probably owing to my participation in the Hugo Awards as well as generally keeping up with favorite authors. You can see the influence of Vintage Sci-Fi Month in Januaries on the graph, but it’s nice to see some vintage stuff throughout the year as well. Since the first few months of 2020 are included in this graph, I’ll just note that I seem to have spread things out extremely well in these three months, hitting up all the decades since the 1950s with at least one entry.

Goodreads includes books and pages over time, but the graphs aren’t super useful because of the spikes produced when I finish books at the beginning of a given month or when I read through, for example, the short story category of the Hugos (and the subsequent valleys). Given the number of books per year, it’s pretty obvious that I’m averaging about 1 book a week. Page numbers are more variable, but sometimes they also produce big spikes for the same reasons…

Some more assorted observations on the year’s reading:

So there you have it, a pretty solid year with no big changes in sight.