Vintage SF Month is hosted by the Little Red Reviewer. The objective: Read and discuss “older than I am” Science Fiction in the month of January.

Rumor has it that James P. Hogan, disappointed by the ending of Stanley Kubrick’s (and I suppose I should also mention Arthur C. Clarke’s) 2001: A Space Odyssey, made a bet with his engineer colleagues that he’d write a science fiction novel inspired by some of the ideas he liked in 2001 (presumably he liked the idea of finding something really weird on the moon). The result is Inherit the Stars, Hogan’s debut novel. It seems to be pretty well received and spawned a few sequels. Hogan would later become a notorious crank, but this debut is pretty interesting and well regarded. 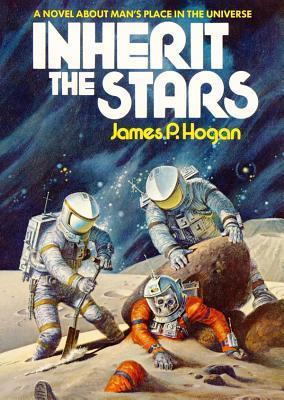 Explorers on the moon make a grim discovery: a corpse in a bright red spacesuit. By all measures, “Charlie” (as he is nicknamed) is human, the same as his discoverers. But no one can identify him. He doesn’t match the description of any missing astronauts and his spacesuit is not of any known manufacture. The mystery only deepens when scientists discover that the body had been lying dead on the moon for 50,000 years. Who was this man? Where was he from? Surely Earth, right? Why was he on the moon? Charlie had a notebook written in an unknown language, but once the translations start to progress, we begin to find some answers, and yet more mysteries also emerge. Soon, other “Lunarians” are discovered on the moon, as well as other evidence of their civilization and the conflict that destroyed them throughout our solar system. But mysteries still abound.

Published in 1977, Inherit the Stars feels more like something out of the 50s. The prose is straightforward and unremarkable, the info-dumps are bald and plentiful, the characterizations are basically an afterthought, and in terms of plot and storytelling, it’s a bit staid. The bulk of the story is just scientists talking to each other about confounding discoveries. I kinda love it. The sense of wonder remains fully intact, starting with the premise, and with the way characters slowly break down the evidence, piecing together what happened 50,000 years ago, hypothesizing explanations, and constantly revising their thoughts when new discoveries don’t fit with the current theories.

To some, the deep dives into how one deciphers a lost language could be tedious, and so too could the constant revisions of speculations about what is really going on. To me, though, this is the beating heart of science fiction. The potential explanations are, in themselves, mysterious and tantalizing, and grow moreso as we find out more information. I’m not entirely sure that the orbital mechanics work out perfectly, but everything generally fits, and the ending makes for a satisfying explanation.

While I was a bit hard on the characterization and plotting, it’s worth noting that the two main characters, while they have opposing theories of what happened throughout the story, are generally cooperative and one of the more impressive things about Hogan’s resolution is that he manages to allow both characters to be correct. It turns out that there’s one piece of evidence that, once discovered, removes all the apparent contradictions, allowing both scientists a victory.

People don’t write books like this anymore. Standards of storytelling and characterization have perhaps risen over time (and, frankly, this still feels like a bit of an outlier even for 1977). That being said, maybe the pendulum has swung too far in the other direction. Characterization is great and all, but these days, it seems to overwhelm the ideas and sense of wonder. In a book like Inherit the Stars, the idea is the hero, something that you don’t see often these days.