The transition of year to year is largely arbitrary, but then, it does happen, and one might as well take the opportunity to take a step back and reflect on where we are and where we’re going. When it comes to movies, most critics and publications have long since published their “Best of 2019” lists and other such reminiscences. This sort of thing has been trending earlier and earlier every year, to the point where people are posting their annual movie recaps in November or early December. This is a bit absurd, so here at Kaedrin, we wait until January to start our festivities, which tend to last about a month. Today, we look at my overall movie consumption in 2019. This will be followed by the Kaedrin Movie Award nominations next week, then the winners, the Arbitrary awards, and finally a Top 10 list. For now, though, let’s look at what I managed to see in 2019:

Last year, I “only” watched 356 movies, which was kind of a bummer because I was so close to the 1 per day average but didn’t quite get there. This year I managed to blow past that goal with 392 films. The general trend is due to watching less television and playing less video games (book reading is about on par with last year). The 1978 project started in the latter half of the year, though I had inadvertently seen a few things earlier in the year too, but 26 movies represents pretty great progress).

As usual, lots of variability from week to week, though you can see a pretty consistent high rate towards the end of the year. New record for movies in one week hits 14 (I may have done more than that before, but since I’ve been recording my watching habits this closely, this is a record), with lots of 10-12 level weeks included. As for days of the week, it looks like Mondays and Saturdays got a little bump this year, though it’s overall more consistent.

When it comes to genres, countries, and languages, it’s not that big of a surprise to see US and English with a commanding lead. UK movies had a decent increase, but are still dwarfed by US movies. The top six countries remain the same though, and tend to be western-focused. Heck, Japan didn’t even place this year (though I certainly watched several Japanese movies.) Action leads the genres, which is not too surprising, with Thrillers and Comedies nipping at their heels. Horror had a bit of a dip compared to last year, but the catchall category of Drama is right about where it normally is. 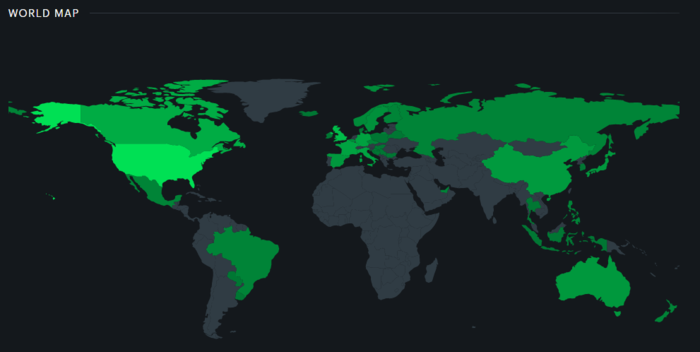 I didn’t count the countries I managed to see a film from this year, but this seems fairly diverse, about on par with last year’s map (give or take a few countries). One of these years, I’ll do a 50 from 50 list to watch 50 films from 50 different countries in one year (maybe even more, since I seem to do pretty well without even trying)…

19.9% of the movies I watched last year were a 2019 release, a slight increase from last year’s 17.1% of 2018 movies. Most of this is driven by streaming movies, which makes sense. 24% of the movies I watched in 2019 were rewatches, which is actually a pretty significant decrease from last year (which was at 29.2%). The ratings spread has moved slightly lower, with the 3 stars (out of 5) rating being the most popular (I used to be a little more forgiving, averaging more like 3.5 stars out of 5). Otherwise a pretty standard bell curve (with a slight bias on the higher end of the scale, driven by rewatches of things I love)… 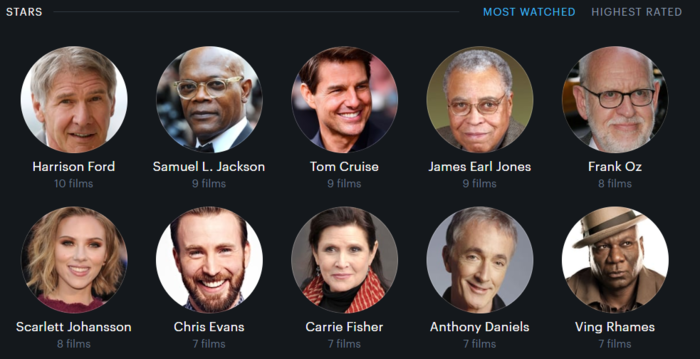 Most watched stars remain pretty white and male, with Harrison Ford edging out Samuel L. Jackson for the top slot. This is mostly driven by a Star Wars rewatch (which, when considering Rise of Skywalker, represented 6 out of the 9 things I saw him in…) ScarJo (driven by Marvel flicks, but she also had a pretty busy year) and Carrie Fisher (also driven by Star Wars) are the female actors on the list. Actually, the grand majority of the list is driven by franchises like Star Wars, Mission Impossible, Marvel, and Ocean’s. The longer list contains only one person not associated with those franchises, which is Danielle Harris (though, heh, her presence is driven by the Halloween and Hatchet franchises, but there are also some other flicks). 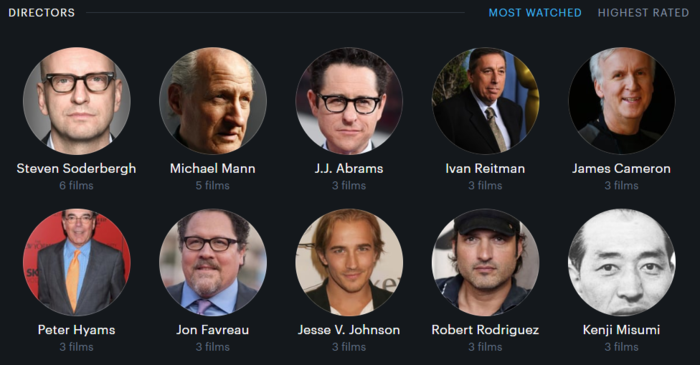 And the most watched directors are not exclusively white and male, but could probably still be more diverse. Maybe a little less franchise driven here, though there’s plenty of that (even Kenji Misumi is only there because I watched a few Lone Wolf & Cub movies this year). A weird inclusion is Jesse V. Johnson, a DTV action director that makes generally enjoyable stuff.

Lowest Average rating and Most Obscure film are the more interesting categories here, though it’s nice to see that both of the others are 2019 flicks, and not some rewatch (which they have been frequently in the past)…

So it’s been a banner year for movie watching here at Kaedrin. Stay tuned for the Kaedrin Movie Award nominations next week!