In accordance with tradition, I’m taking a look back at the year in books (and movies, which will be getting their own, more elaborate, recap in the coming weeks). I keep track of my reading at Goodreads (we should be friends there!), and they have some nifty statistical visualization tools that I can use, even if I’d love a deeper dive into this sort of thing (which I can do, for sure, but which would be much nicer if automated).

First up is total books read: 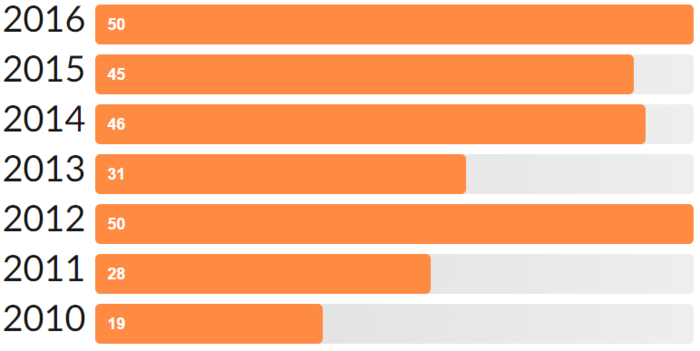 I read 50 books last year which ties my record in the current era (set in 2012). Full list here. Of course, standard disclaimers apply, as this includes a fair amount of short fiction and graphic novels which distorts the numbers a bit. Also, some were audiobooks, which might be a tad misleading. That being said, total pages read provides another angle:

Notably more than last year, just barely edging past 2012, and narrowly missing the 2014 record. Adding in the inherent variability of page numbers, and I think it’s reasonable to put me on par with the record of the modern era. Not too shabby. Anecdotal observation indicates that I tend to read more page numbers when reading shorter books, while longer epics tend to slow me down. This year I had some of both. Sure, I had a bunch of short fiction, but I also read two 900+ page books and several 600+ page books. Some more data: 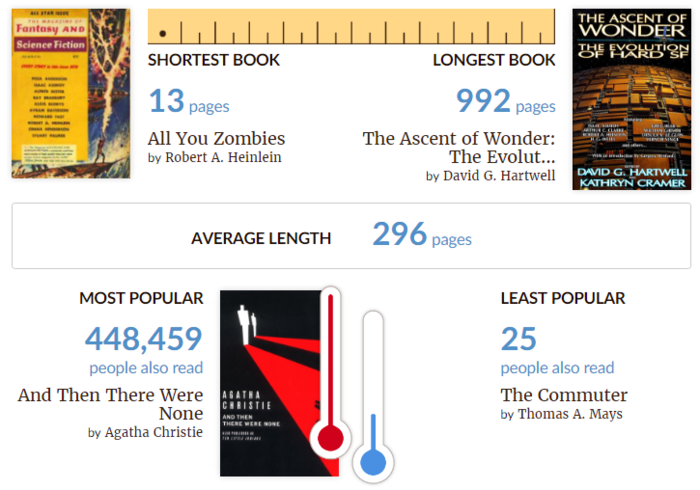 Slightly off pace this year, as last year’s average page length was 306, but again, variability puts this number at about par. Still, this represents a long slide from my high of 356 pages, set in 2013 (which, ironically but tellingly, also had the fewest books read). The longest book of the year was The Ascent of Wonder, a SF anthology clocking in at 992 pages, but I will note that these were large, dense pages that took longer to read than most other books (i.e. this is probably longer than most of my previous longest reads). Runner up would be Swan Song at 956 pages.

The breakdown got a little more complicated this year and includes more short stories and comic books than last year. Probably less non-fiction though, something that I should rectify in 2017. 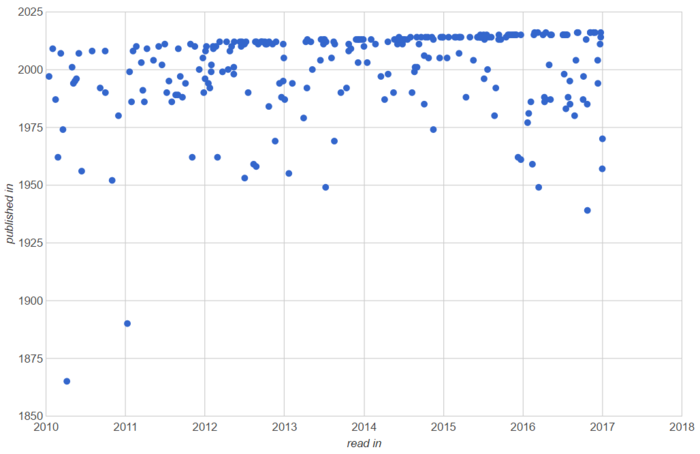 In terms of publication dates, I definitely spread myself out much more this year than in the past two years. I attribute this to lower participation in the Hugo Awards nomination process, which means less current reading, more time to explore the classics or older stuff. The oldest book was 1939’s classic And Then There Were None/Ten Little Indians, followed by 1949’s Needle, also very good.

So I declare last year a success. I don’t have any overriding themes or needs for 2017, so I think you can expect more of the same. Maybe more non-fiction and slightly less current fiction, but no dramatic changes. I’m again on the fence about this year’s Hugo Awards, but after last year’s mild improvement, I’m hoping this year could represent a return to form. I certainly have a few things that I think would make great nominees, so hopefully they still let last year’s members nominate this year… Well, that just about wraps things up. How did your year in books go?