So we have reached the one time of the year in which Astrology suddenly becomes palatable for everyone. As we’ve reached the end of our current calendar’s orbital period, we take stock of where we are and where we’re going. We come down from the holiday season, make resolutions, and promptly get to breaking them. I’m making light of this, but it’s a good thing to do from time to time, and completing another trip round the sun is as good a time as any. I don’t tend to talk about my more personal reflections here, but I do like to look back at the year that was in terms of books I’ve read and movies I’ve seen (movies will get their own, much more elaborate jamboree later in the month). I keep track of my book reading at Goodreads (we should be friends there!), and they have some neato statistical visualization tools which could really use an overhaul, but they’ll have to do and now that I have 6 years of data, it’s more useful than it used to be.

So I read 45 books in 2015, about on par with last year, but still not quite reaching the heights of 2012’s 50 books (my record in the current era). Same distortion as last year: I was following along with the Hugo awards this year, so the 45 includes some short fiction (but, I should add, not all of the ones I read, so maybe it’s a wash). Call it cheating if you like, but it actually made up a smaller piece of the pie than last year. We’ll get into this in more detail below, so let’s take a look at page numbers:

Less than last year’s record breaking number, but far from my worst year and considering the inherent variability of page numbers, let’s just call this on par with last year or 2012. Anecdotal evidence indicates that I tend to read more page numbers when reading shorter books, while longer epics tend to slow me down. This year I had a lot of both. Sure, I had a bunch of novellas and novelettes, but I also read several 800+ page books. Let’s look closer: 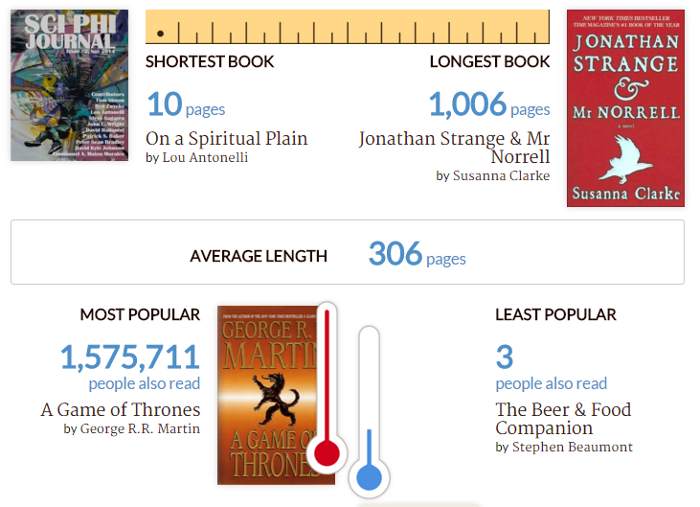 So the shortest book was a Hugo novelette that I was kinda meh about, whilst the honor of longest book went to Jonathan Strange & Mr Norrell clocking in at 1006 pages. Runner up appears to be Seveneves at a svelt 880 pages, followed by the most “popular” novel, A Game of Thrones at 835 pages. And I read a lot of other 500-800 page books, leading to a moderate average page count of 306, which is not quite as good as last year’s 322, but better than 2012’s 289. Interestingly, 2013’s average page count was 356, which is the highest of the current era; more evidence that longer books tend to slow me down. 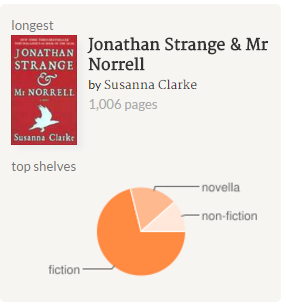 And the breakdown remains similar, though simplified this year. No comic books or short stories included, and maybe a slight increase in terms of non-fiction, but still dominated by fiction.

Goodreads also provides a fancy gizmo that graphs publication dates, which now looks like this: 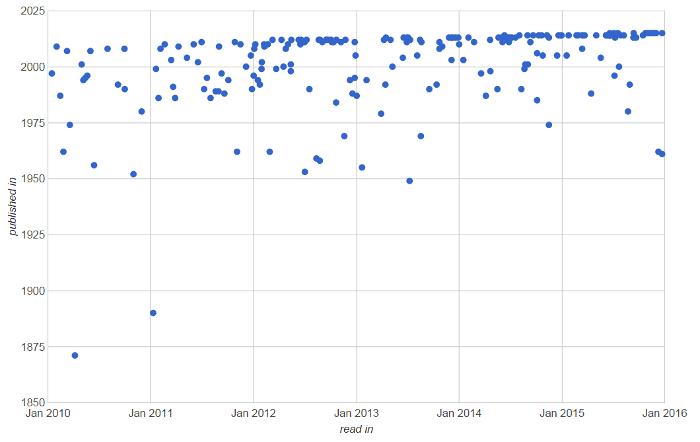 The oldest book I read was 1961’s The Stainless Steel Rat, a short little SF con man turned spy novel. Not my favorite, but more interesting than a lot of Hugo related stuff I’ve been reading.

I declare this a good year of reading. I don’t plan any significant changes in my patterns this year, though I’m honestly still on the fence about participation in this year’s Hugo process. My current membership allows me to nominate, and two of my favorite authors released great stuff this year, so I’ll certainly submit a ballot, but I’m just not sure if I want to put up with all the manufactured controversy. Taking a quick look at the Sad Puppies crowdsourcing post, it looks like there will be a John C. Wright novel this year, which is not an exciting proposition. Dude is talented, but his style bounces right off me and while he sometimes has neat ideas, I rarely find them explored well. Plus, Wright is one of the more divisive members of the Puppy cohort, and I don’t want to deal with all that baggage. I guess we’ll have to see how this plays out. In the meantime, I’ll just keep poking at older SF since that seems to scratch the itch I have right now.