This is impossible. After careful consideration, I was able to narrow this down to ten moments.

Also of note, about 10 moments from the Hail, Caesar! trailer.

2) Scratching The Ladykillers, Intolerable Cruelty and The Hudsucker Proxy from consideration, what would now rate as your least-favorite Coen Brothers movie?

First, I resent the inclusion (er, exclusion) of The Hudsucker Proxy in this question. In my opinion, it’s one of the more underrated Coen Brothers movies. Anyway, this might get me disbarred from movie nerddom, but I really didn’t like Inside Llewyn Davis (and my runner up is another fan fave, Barton Fink). Just bounced right off of those movies.

3) Name the most underrated blockbuster of all time

This is hard, because if a film is actually a blockbuster, it’s not really underrated. It was busting blocks, guys! But if you define it as something that people tend to ignore these days (as opposed to when it opened), it gets more manageable. My first thought was the original Rocky, a film that tends to get unfairly slagged because it won the Best Picture Oscar, beating out film nerd favorites like Taxi Driver, Network, and All the President’s Men. It also suffers because most of what people know about Rocky comes from the sequels and not the film itself.

Sylvia Sidney’s had a long career, and I’ve actually seen stuff all throughout, including Beetlejuice (which she is fantastic in!) and Hitchcock’s Sabotage (which is great).

5) Edwards Scissorhands – yes or no?

Yes! It is a bit indicative of the indulgent excess that would sink a lot of Burton’s later work, but here it is still fresh and interesting.

6) The movie you think most bastardizes, misinterprets or does a disservice to the history or historical event it tires to represent

The thing with this is, is that most bastardizations generally make for a better movie. No one gets on The Inglorious Bastards for being inaccurate. Indeed, that’s the whole damn point. So the trick here is to find a movie that is bad, which thus does much more of a disservice to history. As such, a couple that come to mind are Pearl Harbor and The Patriot.

This is pretty simple: The Curse of the Were-Rabbit.

I haven’t seen enough Assayas to comment on this one, so here’s my first mulligan. 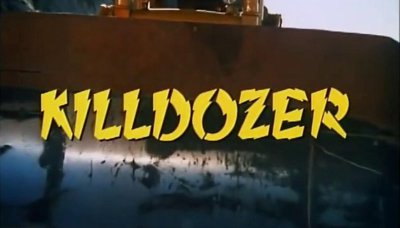 I always feel like a cheat when I answer The Godfather, because it’s so universal and can be the answer for such a wide variety of questions, but then, here we are. Gangster movies can be trashy, but this is anything but…

11) Name any director and one aspect of his/her style or career, for good or bad, that sets her/him apart from any other director

Too many answers to count here, but the first to come to mind is the weaponized quirk of Wes Anderson.

There are so many iconic car chases in film that it’s hard to narrow down, so I think I’ll try to highlight some more obscure personal favorites. I guess The Blues Brothers isn’t that obscure, but it’s an unexpected source for great car chases. Death Proof is notable because it’s a practical effect in an era of CGI. I’ve always enjoyed the care chase in Running Scared. But of course, the answer to this is The Road Warrior (and, I suppose, Mad Max: Fury Road).

Opening the box at the end of Kiss Me Deadly… 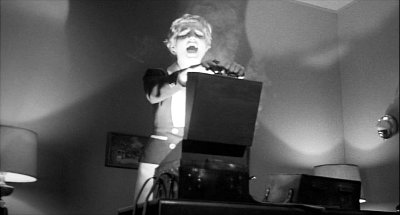 14) The last movie you saw in a theater? On home video?

In the theater, it was Krampus, a delightfully mean-spirited Christmas horror movie that nevertheless generated a few laughs. On streaming, it was Barely Lethal, a weirdly fluffy child assassin goes to high school movie that is more successful than, say, Kick-Ass 2, but that’s not saying much. And on BD, it was Magic Mike XXL, also fluffier than expected, and more episodic than the first film, oddly weightless… but maybe better for that.

Jane Greer because Out of the Past.

Total Recall behind favorite RoboCop. “Consider that a divorce!”

Can it be anything other than The Thin Blue Line? That’s the answer, right? Alright, there’s lots of worthy answers to this, but Errol Morris’ masterwork is my pick.

It’s corny and the movie is not that good, but the pairing of Arnold Schwarzenegger and Danny DeVito in Twins is goofy and fun by itself. On a more serious note, the Jeromy Irons twins in Dead Ringers are haunting.

19) Best movie or movie moment about or involving radio

The two that leapt out at me are Samuel L. Jackson’s Radio DJ from Do the Right Thing and the backdrop of “K-Billy’s Super Sounds of the Seventies Weekend” (DJed by the deadpan Steven Wright) from Reservoir Dogs.

I will go with the “Gargantuan-bellied, frog-voiced character actor” Eugene Pallette, a memorable presence for sure.

My first thought ran to Jonesy from Alien, but that’s more indicative of my love for that movie and all its minutiae than because of the cat itself. Similarly, Elliot Gould’s cat in The Long Goodbye is more memorable because of the movie it’s in than because it’s a cat. Finally, I settled on Irena from Cat People, because she’s a giant cat.

23) Your nominee for best movie about teaching and learning, followed by the worst

Real Genius is one of my favorite movies and while the teaching and learning are not direct, I’ve found that the most valuable stuff I learned in college was not in the classroom, so there is that. Plus, all the other answers I could think of had similar flaws.

Krysten Ritter has been in several TV shows and is always a memorable presence, even when she’s not the lead like in Jessica Jones, where she’s still awesome and proves she could totally headline a big screen film.

I’ve seen a few movies from each filmography, but to be honest, I don’t have a preference, so another mulligan for me.

26) Critic Manny Farber once said of Frank Capra that he was “an old-time movie craftsman, the master of every trick in the bag, and in many ways he is more at home with the medium than any other Hollywood director, but all the details give the impression of a contrived effect.”

What is the Capra movie that best proves or disproves Farber’s assertion? And who else in Hollywood history might just as easily fit his description?

I think the second question betrays the difficulty of the first. There are tons of old-time craftsmen out there, and most film is contrived. That being said, even if It’s a Wonderful Life gives the impression of a contrived effect, we should all strive to be so contrived. The other director who might fit this description? Alfred Hitchcock, naturally.