In response to my post on Visual Literacy and Rembrandt’s J’accuse, long-time Kaedrin friend Roy made some interesting comments about director Peter Greenaway’s insistence that our ability to analyze visual art forms like paintings is ill-informed and impoverished.

It depends on what you mean by visually illiterate, I guess. Because I think that the majority of people are as visually literate as they are textually literate. What you seem to be comparing is the ability to read into a painting with the ability to read words, but that’s not just reading, you’re talking about analyzing and deconstructing at that point. I mean, most people can watch a movie or look at a picture and do some basic contextualizing. … It’s not for lack of literacy, it’s for lack of training. You know how it is… there’s reading, and then there’s Reading. Most people in the United States know how to read, but that doesn’t mean that they know how to Read. Likewise with visual materials–most people know how to view a painting, they just don’t know how to View a Painting. I don’t think we’re visually illiterate morons, I just think we’re only superficially trained.

I mostly agree with Roy, and I spent most of my post critiquing Greenaway’s film for similar reasons. However, I find the subject of visual literacy interesting. First, as Roy mentions, it depends on how you define the phrase. When we hear the term literacy, we usually mean the ability to read and write, but there’s also a more general definition of being educated or having knowledge within a particular subject or field (i.e. computer literacy or in our case, visual literacy). Greenaway is clearly emphasizing the more general definition. It’s not that he thinks we can’t see a painting, it’s that we don’t know enough about the context of the paintings we are viewing.

Roy is correct to point out that most people actually do have relatively sophisticated visual skills:

Even when people don’t have the vocabulary or training, they still pick up on things, because I think we use symbols and visual language all the time. We read expressions and body language really well, for example. Almost all of our driving rules are encoded first and foremost as symbols, not words–red=stop, green=go, yellow=caution. You don’t need “Stop” or “Yield” on the sign to know which it is–the shape of the sign tells you.

Those are great examples of visual encoding and conventions, but do they represent literacy? Why does a stop sign represent what it does? There are three main components to the stop sign: 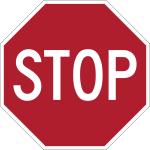 Interestingly, these different components are overlapping and reinforcing. If one fails (for someone who is color-blind or someone who can’t read, for example), another can still communicate the meaning of the sign. There’s something similar going on with traffic lights, as the position of the light is just as important (if not more important) than the color of the light.

However, it’s worth noting that the clear meaning of a stop sign is also due to the fact that it’s a near universal convention used throughout the entire world. Not all traffic signals are as well defined. Case in point, what does a blinking green traffic light represent? Blinking red means to “stop, then proceed with caution” (kinda like a stop sign). Blinking yellow means to “slow down and proceed with caution.” So what does a blinking green mean? James Grimmelmann tried to figure it out:

It turns out (courtesy of the ODP and rec.travel), perhaps unsurpsingly, that there is no uniform agreement on the meaning of a blinking green light. In a bunch of Canadian provinces, it has the same general meaning that a regular green light does, with the added modifier that you are the undisputed master of all you survey. All other traffic entering the intersection has a stop sign or a red light, and must bow down before your awesome cosmic powers. On the other hand, if you’re in Massachusetts or British Columbia and you try a no-look Ontario-style left turn on a blinking green, you’re liable to get into a smackup, since the blinking green means only that cross traffic is seeing red, with no guarantees about oncoming traffic.

Now, maybe it’s just because we’re starting to get obscure and complicated here, but the reason traffic signals work is because we’ve established a set of conventions that are similar most everywhere. But when we mess around with them or get too complicated, it could be a problem. Luckly, we don’t do that sort of thing very often (even the blinking green example is probably vanishingly obscure – I’ve never seen or even heard of that happening until reading James’ post). These conventions are learned, usually through simple observation, though we also regulate who can drive and require people to study the rules of driving (including signs and lights) before granting a license.

Another example, perhaps surprising because it is something primarily thought of as a textual medium, is newspapers. Take a look at this front page of a newspaper1 : 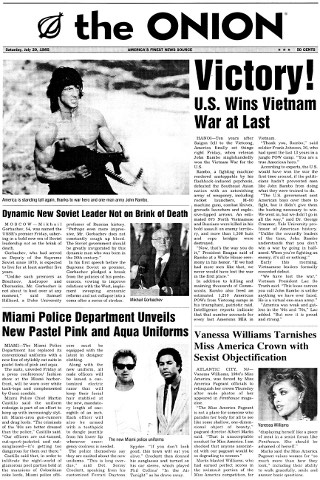 Newspapers use numerous techniques (such as prominence, grouping, and nesting) to establish a visual hierarchy, allowing readers to scan the page to find what stories they want to read. In the image above, the size of the headline (Victory!) as well as its placement on the page makes it clear at a glance that this is the most important story. The headline “Miami Police Department Unveils New Pastel Pink and Aqua Uniforms” spans three columns of text, making it obvious that they’re all part of the same story. Furthermore, we know the picture of Crockett and Tubbs goes with the same story because both the picture and the text are spanned by the same headline. And so on.

Now I know what my younger readers2 are thinking: What the fuck is this “newspaper” thing you’re babbling about? Well, it turns out that a lot of the same conventions apply to the web. There are, of course, new conventions on the web (for instance, links are usually represented by different colored text that is also underlined), but many of the same techniques are used to establish a visual hierarchy on the web.

What’s more interesting about newspapers and the web is that we aren’t really trained how to read them, but we figure it out anyway. In his excellent book on usability, Don’t Make Me Think, Steve Krug writes:

At some point in our youth, without ever being taught, we all learned to read a newspaper. Not the words, but the conventions.

We learned, for instance, that a phrase in very large type is usually a headline that summarizes the story underneath it, and that the text underneath a picture is either a caption that tells me what it’s a picture of, or – if it’s in very small type – a photo credit that tells me who took the picture.

The tricky part about this is that the learning seems to happen subconsciously. Large type is pretty obvious, but column spanning? Captions? Nesting? Some of this stuff gets pretty subtle, and for the most part, people don’t care. They just scan the page, find what they want, and read the story. It’s just intuitive.

But designing a layout is not quite as intuitive. Many of the lessons we have internalized in reading a newspaper (or a website) aren’t really available to us in a situation where we’re asked to design a layout. If you want a good example of this, look at web pages designed in the mid-90s. By now, we’ve got blogs and mini-CMS style systems that automate layouts and take design out of most people’s hands.

So, does Greenaway have a valid point? Or is Roy right? Obviously, we all process visual information, and visual symbolism is frequently used to encode large amounts of information into a relatively small space. Does that make us visually literate? I guess it all comes down to your definition of literate. Roy seems to take the more specific definition of “able to read or write” while Greenaway seems to be more concerned with “education or knowledge in a specified field.” The question then becomes, are we more textually literate than we are visually literate? Greenaway certainly seems to think so. Roy seems to think we’re just about equal on both fronts. I think both positions are defensible, especially when you consider that Greenaway is talking specifically about art. Furthermore, his movie is about a classical painting that was created several centuries ago. For most young people today, art is more diffuse. When you think about it, almost anything can be art. I suspect Greenaway would be disgusted by that sort of attitude, which is perhaps another way to view his thoughts on visual literacy.

1 – Yeah, it’s the Onion and not a real newspaper per say, but it’s fun and it’s representative of common newspaper conventions.

2 – Hahaha, as if I have more than 5 readers, let alone any young readers.

4 thoughts on “More on Visual Literacy”