In Crest of the Stars, we were introduced to Lafiel and Jinto (and they are introduced to each other), the main characters of this series. They are almost immediately embroiled in the outbreak of a major war and are very nearly trapped behind enemy lines. However, they manage to escape to safety and join the Imperial Star Forces (which is their duty, as Jinto is an Imperial noble and Lafiel is a member of the royal family). During the course of the story, Lafiel and Jinto become good friends and in Banner of the Stars, they are reunited on the Basroil, a rather small assault ship in the massive Imperial Navy. While Jinto and Lafiel are still key characters, that series takes a much broader view of the war, often focusing on the strategic decisions made by various Admirals (one of whom is Lafiel’s father). Banner of the Stars is an excellent story of military combat, and part of the reason it works so well is that it focuses on both the strategic and tactical perspectives. You get a feel for the overall war in the scenes with various Admirals, while you get a good idea of what it’s like on the front lines in the scenes with the Basroil.

With Banner of the Stars II, the series returns to its more personal roots. It is more like Crest of the Stars in that it is much more concerned with Lafiel and Jinto than the overall war effort. There are, of course, some establishing scenes featuring Admiral Bebaus and later in the story, Admiral Spoor pitches in, but the overall story is tightly wound around Lafiel and Jinto. 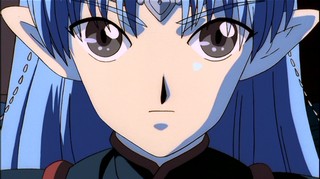 At the end of the first Banner, the Abh was victorious. In the sequel, Admiral Bebaus is leading the effort to reclaim the planets initially lost during the war with the United Mankind. His fleet is moving quickly, and as each new system is reclaimed, a Territorial Ambassador is left behind to manage the planets. Lafiel is assigned as Territorial Ambassador to the Lobnas system. This sort of duty is usually described as tedious and boring, but in this case, things become interesting when we find out that Lobnas was used as a giant prison, with millions of prisoners inhabiting the only island on the planet. There are guards, but things escalate quickly when some prisoners and guards request emigration.

I don’t want to go into too much detail about the actual conflict, but I will say that I enjoy stories like this, where something seemingly simple turns out to be much more complex than initially thought. The characters who represent the various factions in the conflict are surprisingly well drawn considering how little screentime they have, and the relationship between Lafiel and Jinto is fleshed out more as a result. We also see more interaction between Lafiel and Admiral Spoor, and in an amusing turn, Admiral Abriel lays the smackdown on the Admiral Bebaus. There are less battle sequences here, but what battles do happen are pretty intense. It’s also interesting to get a peek into the internal workings of the prison planet as well as the Abh government and how they treat conquered planets (just a small part of the impressive worldbuilding the series engages in). At one point, we also get a rather disturbing glimpse of how the Abh regard the faithful execution of revenge (something they attempt to use as a deterrent, which is an interesting conjecture).

My initial thought was that the series had seriously decreased the stakes, which was almost disappointing. Crest was the story of two characters escaping the enemy, while Banner raised the stakes considerably. The interstellar war portrayed in Banner was filled with tension and suspense. The outcome was by no means guaranteed, and the fate of the Abh empire hung in balance. So became a little confused when Banner II focused on such a seemingly insignificant planet of no strategic value. However, as the series progressed, I found myself drawn into the fate of those on the planet and more importantly, I realized that while the stakes were not on a galactic level, they were still high due to the emotional investment we have with the main characters of Lafiel and Jinto. Furthermore, the series is tightly plotted. There’s no filler here, and while things may start a bit strangely, the tension builds steadily. Crest lagged a bit in the middle, but Banner and now Banner II are very well constructed.

In the end, I breezed through the 10 episode series rather quickly and very much enjoyed them. Each of the series tells a somewhat independent story, and Banner II is no exception, but I’m betting that some of the emotional impact is lost on someone who hasn’t seen the previous two installments. And for the record, I also recommend watching Crest of the Stars before the first Banner. In any case, Banner II is a welcome addition to the series and well worth a watch if you enjoyed the first two series (especially Crest)…

Due to Netflix’s semi-permanent “Very Long Wait” status on the last disc, I had to torrent the last three episodes, but it was easy to find and I even managed to use a media server to stream it to my PS3, which worked better than I expected. Next up is Banner of the Stars III, which to my knowledge has not been released in the US yet, but the torrent is available… As usual, more comments and screens below the fold (actually, not as many as usual, but a few).

The Lobnas system is the big yellow circle. As you can see, it’s firmly behind the front lines of the war. You’d think that would mean that the system is safe, but things are more complicated than they appear… You can also see Admiral Bebaus’ advance to the left. 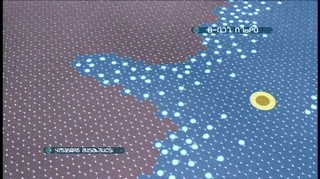 These are the representatives of the four main factions on Lobnas. One of the first challenges Lafiel and Jinto face is deciding which one to trust. 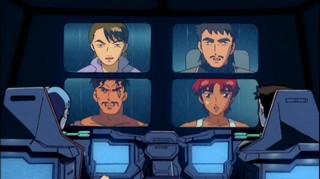 As previously implied, there are 4 main factions on the planet, and they’re all divided up as seen below. The territory on the rightmost side kicks up the most fuss, mostly to get to the territory on the leftmost side. The bottom section is where the guards and administrative officers are housed. Again, I don’t want to go into too much detail here, but the seemingly simple situation gets out of hand pretty quickly. 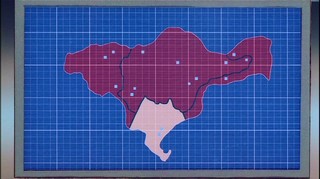 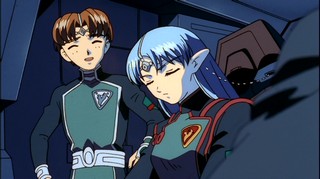 On the planet, there are these slug-like (or perhaps leech-like) creatures that are constantly crawling around. I’m not sure what the point of them is, but it’s something I want to keep in mind during future rewatching. 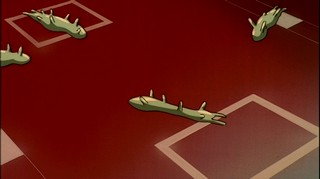 While I wouldn’t consider the series overly violent, it does get darker than in previous series. For example, one of the various factions kills this guard in cold blood, something we don’t see often in the series (though we do see a fair amount of ships exploding, etc…) 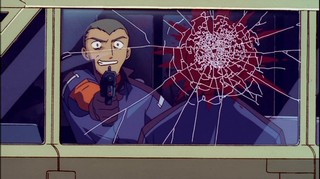 On a lighter note, the series does feature some light fan service in the form of this character (interestingly, it almost makes sense in the context of the story that she be dressed this way, at least, from a symbolic standpoint): 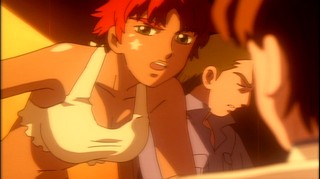 The low angle of this shot of Admiral Spoor is used to either emphasize her powerful position… or it’s an extremely mild form of fan service. Maybe both. 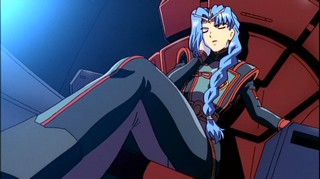 Well, that about wraps up Banner II…

2 thoughts on “Banner of the Stars II”