Galactic Civilizations II continues to occupy the majority of my free time, and I wanted to try showing a game example (similar to this one by one of the game’s creators, though my example won’t be as thorough). I’ll be showing how I was able to secure good long term prospects at the beginning of my second game.

I played my first game as the Terran Alliance (humans), and one of the most enjoyable things I’ve noticed about the game is the ability to customize various aspects, such as planet names and ship designs. So this time, I decided to create a new race, the Kaedrinians (long time readers should get a kick out of that), and installed tallman as their emperor.

Update: Moved screenshots and commentary to the extended entry. Click below to see full entry…

(Click images for a larger version, usually with more information) 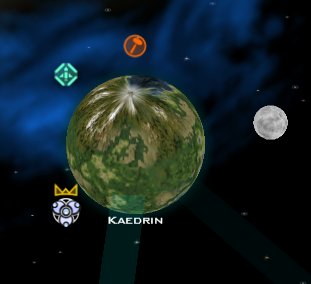 I set up the galaxy so it was relatively small and had relatively few habitable planets. This may turn out to be my undoing. My typical strategy in these types of games is to expand quickly and get a foothold in several starsystems to start. The Kaedrin system was blessed to have two habitable planets, Kaedrin (which is my homeworld) and Vizzard II, a very low quality planet. After a cursory examination of the surrounding starsystems, I had not found any other habitable planets. As I expanded my search, I saw that most of my opponents were luckier in terms of colonization. Nevertheless, I was able to secure one planet that was relatively far away from my homeworld. However, that planet was also of a relatively low quality. Low quality planets don’t support nearly as many enhancements or production capacity. These would serve me well at the beginning of the game, but would become less and less important as time went on. 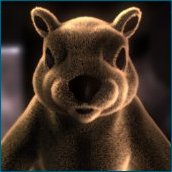 This simply would not do. I had to act quickly if I wanted to secure long term survival (let alone domination). My general strategy is to focus on trade and influence to start, but this time I decided to focus mostly on my military might and, secondarily, economics and trade (having a strong economy would help power the military machine). The goal here would be to find a weak race and take over their planets early. Most of the major races were pretty well established, but I found the perfect opportunity with one of the minor races: the Snathi, a cuddly but apparently “evil” race of squirrel-like beings. One of the nice things about this game is that the creators seem to have a genuine sense of humor. Their description of the Snathi includes this little gem: “… after billions of years of hoarding their proverbial ‘nuts,’ the Snathi have metaphorically ‘climbed out of their tree’ and will ‘gnaw the galaxy with their squirrel-like teeth’… so to speak.”

Despite their cuteness factor, I could not let such nefarious beings continue to exist. Plus, their planet was of an obscenely high quality. It was a real gem. The highest quality planet I’d seen in the galaxy, and thus ideally suited for my purposes of galactic expansion. The Snathi appeared to be farther along in cultivating their planet than I, and were churning out constructors and freighters at a relatively high rate. Lucky for me, neither of those ship classes had any military capacity (no weapons or shields). However, this fortuitous state would not hold forever. I had to act fast if I was to take the planet (I also had to worry about one of the other major civilizations making a run for this ripe planet. Luckily, because they only had one planet, I didn’t have to worry about the annoying surrender factor.)

In order to invade, I would need to research a few technologies and build an invasion fleet. The fleet would include a troop transport and a combat escort. The transport ship is one of the core ships and once I had researched the planetary invasion technology, building that ship would be simple. The combat escort, however, presented me with an opportunity to utilize my favorite feature of GalCiv II, the customized ship builder. After researching a number of technologies, I was finally ready to design my first warship, the Space Lion: 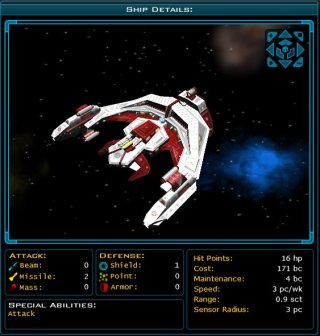 Armed with Stinger II missiles and basic Shields, the Space Lion wasn’t unstoppable, but she packed an impressive punch despite being constructed so early in the game. After constructing my fleet and making the long journey to the Snathi homeworld, I was ready to invade. There was just one problem. My technology is still relatively unsophisticated, so I could only transport around 1 billion troops for the invasion. And the Snathi homeworld had a population of 16 billion people! I was drastically outnumbered, so I decided to pay a little extra and use one of the specialized invasion tactics. Many of the invasion tactics result in a large advantage for the invader, but also lower planetary quality and improvements, which is antithetical to my purpose for the invasion. Thus I decided to go for Information warfare. This would cause a significant portion of the enemy troops to join my ranks, thus mitigating their numerical superiority (though I would still be outnumbered), but more importantly, it would leave the planet quality and improvements unharmed. The invasion begins: 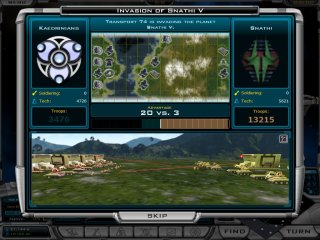 Victory! The Information Warfare tactic paid off in spades, giving me an extra 2.5 billion troops. I was still outnumbered, but my advantage factor was so much higher that it did not matter. I was able dispatch the adorable but monstrous Snathi with relative ease. The planet was mine! 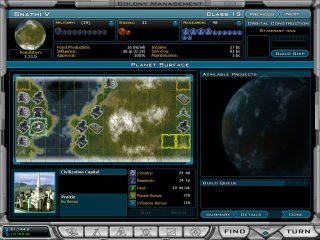 And what a planet it was. Look at all those manufacturing and technology centers. In terms of industry and research, it was significantly better than my own homeworld of Kaedrin, and I suspect it will quickly become the jewel of the Kaedrinian empire, researching, building and producing more than any other planet. Will I succeed in galactic conquest? Nothing is definite, but now that I have secured this planet, I am primed and ready to go. I’ll end my account here, as time does not permit recapping the entire game, but I though this was a natural place to stop.

Update: Read more on this campaign: The continuing adventures of the Kaedrinians

4 thoughts on “GalCiv II: Rise of the Kaedrinians!”