As I predicted in last week’s post, I’ve gone ahead and downloaded Galactic Civilizations II. Installation process went smoothly and easily (relatively high download speeds as well), but while I enjoy the game as a whole, I found a few things baffling. Here are my initial thoughts: 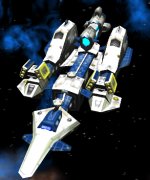 Aside from the odd and frustrating ending, I really enjoyed the game. I’m hoping the ending thing is just a minor bug that won’t come up again, but I guess we’ll see. I apologize if this entry seems a bit sparse, but if the game hadn’t ended so abruptly, I probably still would have been playing (and no entry would have been posted at all). Expect more later in the week.

Update: Ok, so I must have accidentally surrendered (instead of offering a peace treaty) from the diplomatic dialogue. That’s the only thing I can think of that would have caused the defeat. I just went back to my saved game and was able to mop up the rest of the Drengin empire without a problem (except that once I really had their backs to the wall, the surrendered their one remaining planet to another alien race, dammit!) So the problem I encountered seems like a fluke, which is great news!

Update II: After I figured out what happened, I went back and played more and the game is truly excellent. My only complaint is that the ship design interface is a little difficult to use at times… but the good far outweighs the bad when it comes to that feature, as it is one of the coolest aspects of the game, allowing you to interject your own personality on the game…