A little while ago, I came into the possession of a collection of 9 early Alfred Hitchcock films (i.e. 1920s and 1930s, his pre-Hollywood films). Since Cinecast (a film podcast) was doing a Hitchcock Marathon, I decided to play along in a manner of speaking (the major difference being that I’m going to watch more than the 6 films they’ve selected… in fact, the only film on their list that’s currently in my collection is The 39 Steps).

I started my marathon with one of Hitchcock’s first efforts, a 1926 silent film called The Lodger. I enjoyed the film a lot, though it had a lot to do with the context and conventions of silent films. Moving in chronological order, I’ve progressed through three more films: Blackmail, Rich and Strange, and Number 17.

More thoughts on all three, including Spoilers as well as a few screenshots (with the typical sarcastic captions) below the fold…

“talkies,” this film started production as a silent film and the producers decided to change part-way through the production. As such there are actually two versions of the film, one silent, and one with sound, though the version with sound (the one I saw) seems to be the best remembered version. The movie tells the story of Alice White, a woman dating a policeman named Frank. She’s bored with Frank and decides to mess around with an artist. To make a long story short with the help of spoilers, the artist is a perv who attempts to rape Alice so she kills him with a breadknife that just happens to be conveniently located on the bedstand: 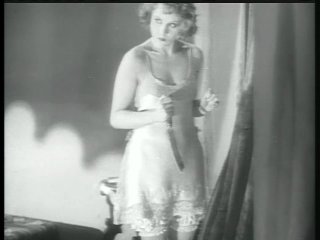 I used this knife for bread, and only bread. This is the face I make when I’m cutting bread.

Naturally, policeman Frank is assigned to the case and he quickly realizes who did it. Unfortunately, so does a local “sponger” named Tracy, who promptly attempts to blackmail Alice and Frank. This guy’s a real scumbag, as evidenced by his drastic demands for… a cigar and breakfast. Seriously, that’s what he blackmails them for. In any case, the story takes a few twists and turns and ends with an odd pre-noir sensibility. Like The Lodger, this film’s noir-like elements threw me off the tracks for a moment, as I keep expecting something a little more tragic to happen (though this film wasn’t quite as upbeat as The Lodger‘s ending).

Rich and Strange (1931): Offbeat, a little uneven, and seemingly out-of-character for Hitchcock, this film follows the story of Fredy and Emily as they unexpectedly come into money and decide to cruise around the world. The couple eventually winds up becoming romantically entangled with other passengers. Hijinks ensue. Aside from the ending, this film isn’t what you’d typically expect from Hitchcock – it’s more of a romantic comedy than anything else. Even visually, I wasn’t particularly impressed. It’s good at what it does, but was a little too slow for me…

Number 17 (1932): This film follows a gang of thieves who have stashed their loot in a safehouse. The police are hot on their heels, of course, but they have an escape plan. This film is most notable for Hitchcock’s obvious experimentation with the medium. Hand held cameras, movement, and quick cuts are all used effectively. Making extensive use of candlelight, he plays with lighting and shadows throughout the film: 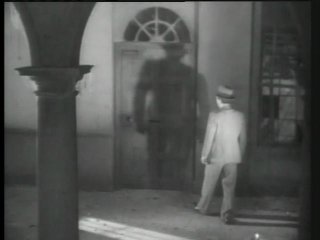 Stepping through my shadow…

The obvious highlight of this film, though, is the classic chase sequence involving a train and a bus: 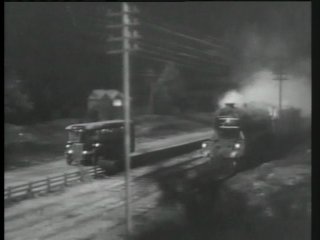 No, these are not obviously miniatures. 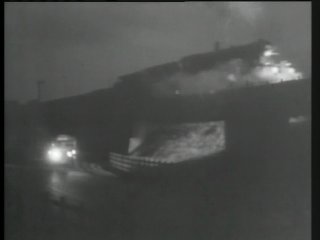 No miniatures here, move it along.

Despite the fact that the special effects here are clearly done with miniatures, this is probably the most suspenseful part of the film, and an interesting glimpse of things to come (both in terms of chases and trains). As the Classic Film Guide notes: “This is a most unusual film. You can witness elements of what will become the director’s style, but overall the pace is fairly plodding and the story pretty lame and confusing.”

Again, these early films show glimpses of Hitchcock’s future brilliance, but are not especially brilliant in themselves. There were a lot of plotting and pacing problems in particular, though I do wonder how my modern perspective affects my perception of these movies. As with The Lodger I wonder how much of the impact of these films is lost because of the modern, cynical attitudes towards storytelling. As I said in my previous post:

These days, we’re so zonked out on Lost and 24 that our minds immediately and cynically formulate all the ways the filmmakers are trying to trick us. Were audiences that cynical 80 years ago? Or did the ending truly surprise them?

And, of course, the more pressing question: did people really leave loaves of bread and knives on their bedstands?