I’ve been writing this blog for almost 20 years now and while I’ve touched on politics from time to time, it’s not a strong point and I’ve found that while arguing about stuff on the internets can be productive at times, these days it just makes me angry. Social media doesn’t help. With all due respect to Twitter and Facebook, they’re awful platforms for these sorts of discussions. They’re optimized for “increased engagement” but that basically amounts to algorithms that seek to obliterate nuance and sow discord.

A couple of months ago, as the world went into various forms of lockdown to fight a pandemic, I thought maybe blogs could make a comeback. That’s somewhat naive, I guess, and it’s not like some blogs weren’t a cesspool, but they were at least easily isolated or avoided cesspools. Social Media only occasionally scratches that blogging itch, but it’s too easy to mix garbage into your feed (or to have an algorithm insert garbage into your feed despite explicitly rejecting to follow someone, etc…) It’s a signal vs noise problem, and the algorithms find that noise actually increases engagement, so it’s encouraged. 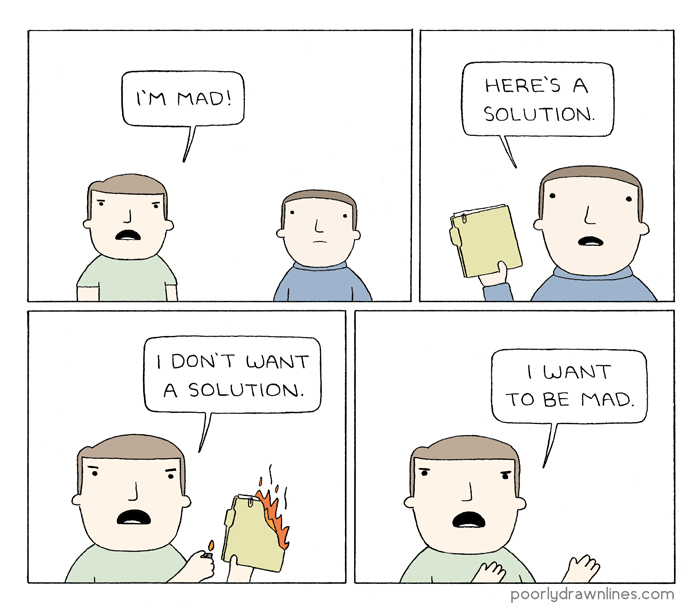 If there’s one recommendation I can make right now, it’s to at least be aware how this sort of thing works. I don’t think you need to avoid social media altogether (though it may be a good idea to take breaks from time to time!), so long as you are thinking critically about what you’re seeing. Anger is a natural and legitimate response to a lot of things in this world (what happened to George Floyd, for instance), but social media’s goal is to increase engagement by stoking that anger into something less focused and unproductive.

Look, anger can prompt action, but it can also end in counterproductive events or, strangely, apathy. I’m not very productive when I’m angry (or, I should say, that kind of angry), which benefits no one. We’re living through an unprecedented mixture of upheavals ranging from a pandemic to police officers committing murder to protests to antifa to looting to curfews and much more. No one reads this blog and to be honest, my “in the moment” analysis isn’t going to be very productive, but I’m reading and thinking and trying to find core issues and ways to support needed change (justice for George and I’m glad the police officer in question has been arrested and charged, but it goes far beyond that). I’m angry, but I’m trying to find ways to contribute that will actually help. As are most people! Another failing of social media is that it amplifies the most divisive voices even what the grand majority of people can all agree on a given issue.

For the record, some bullshit Executive Order isn’t going to “solve” social media. I’m critical of social media in this post, but it also contains value, and improvements to social media probably won’t come from government. The only way to “solve” social media is for its users to be more aware of what those platforms are and how they react to it. A lot of the best parts of the internet are also its worst parts, and it’s important to understand how that works.

All of which is to say: be safe and constructive out there, people. It might seem impossible, but we can get through this stronger than before. Change happens incrementally, and while it might seem like small victories aren’t enough, they can add up and build a base for larger change. But we have to want that. We’re trying to move mountains here, it won’t happen overnight. Being angry on social media isn’t going to get it done. Only a few people read this (or, for that matter, my social media accounts), but if you are reading this, I will repeat: stay safe and constructive.

1 thought on “Safe and Constructive”