Vintage Science Fiction Month is an annual call to celebrate, read, and discuss “older than I am” Science Fiction. I’ve participated in this for the last few years and have found the process rewarding. This non-challenge was the brainchild of Andrea from Little Red Reviewer, and this year, there’s been a concerted push to get more participation, which is why I’m posting this now. It’s never too early to start thinking about what you want to read and discuss. The only real rule for participating is that you do so in January. 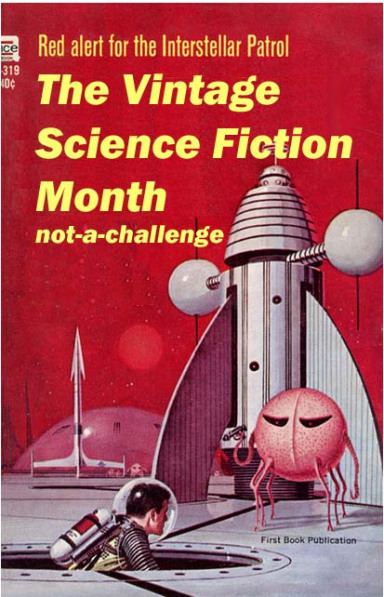 Since it’s October and I’m already wallowing in the Halloween season, I figured it would be worth taking a look at the intersection between horror and science fiction. While both genres are distinct, there is surprising amount of overlap, even in the histories of those genres. Of course, defining genres is a task fraught with drama and controversy, but my goal here is not to strictly define what science fiction and horror are, but to explain how my understanding of horror has informed my thoughts on science fiction (and vice versa). It’s easy enough to come up with a definition for a genre that covers straightforward examples, but those definitions always get blurry around the edges, and cross-genre works become difficult to categorize. Again, it’s not my goal here to define some works as “not real SF” or whatever, just to explore that blurry, fuzzy area between science fiction and horror. And there’s a lot to explore, going all the way back to the origins of science fiction.

Gothic horror novels like The Castle of Otranto or more famously Frankenstein; or, The Modern Prometheus contain the roots of what would become science fiction, even if the genres eventually diverged considerably. Other nineteenth century authors, like Edgar Allen Poe and Robert Luis Stevenson, made similar forays beyond normal horror tropes to include science-related activities.

If you look in a bookstore, though, you probably won’t find this stuff in the science fiction section. This separation of horror from science fiction is a marketing decision, but then, that’s the point of genres in the first place. Assigning a work to a genre generates a set of expectations in the reader. Such expectations can manifest as tropes, codes, references, and even expressive prose techniques, all in service of providing the reader with an experience consistent with genre conventions. While both genres often portray spine-tingling confrontations with a terrifying unknown, the chief difference between them is not the events depicted, but how the response to those events is characterized. The horror or gothic response is generally one of acceptance and surrender, while science fiction’s reaction is one of rational curiosity. To drastically simplify the sitation: horror thrives in a lack of understanding while science fiction sees such threats as a challenge to be overcome, a problem to be solved. These are generalizations, of course, and there are certainly exceptions and cross-genre exercises that straddle the line. As science fiction matured though, these distinctions became more pronounced.

If you read vintage SF and gothic fiction, you can see this transition happening in the early 20th century, and accelerating once John Campbell took over editing duties for Astounding. Funnily enough, Campbell’s most famous story from his time as an author is Who Goes There?, a fantastic horror story turned into SF by the way in which the characters confront the shapeshifting “Thing” from another planet. It’s telling that filmic adaptations of this story emphasize the horror elements by instituting a more ambiguous ending not present in the story (in which the terrifying alien is now understood and rationality is re-established). In any case, Campbell’s work as an editor did transform science fiction and hasten the divergence between horror and science fiction.

Overlaps between the two genres are still common, of course, but often as a way to emphasize which genre we’re really in. Take William Peter Blatty’s The Exorcist; pretty definitively categorized as horror, but when you actually read the book, a very large amount of time is spent on ruling out more mundane, science-based explanations for the situation. Indeed, the notion that something is happening that science cannot explain is part of what makes the story scary (though there are other things that also contribute). You see this technique in a lot of horror stories to this day, but what makes them good horror is that the problem is often left unsolved or at least, poorly understood. Even when an evil is defeated, it’s often portrayed as a short-term, localized victory and that the evil will likely return.

Arthur C. Clarke once infamously observed that “Any sufficiently advanced technology is indistinguishable from magic.” One of the ways that SF has evolved is to widen the perimeter of explainable phenomena. This quickly moved beyond unknown planets and aliens and other scientific speculations to include ideas that originated in myth and fantasy and horror. One particular sub-genre of SF that is relevant here is the technology-of-magic story, which depicts seemingly supernatural powers, but then provides plausible explanations in order to defuse the situation. Most of the above mentioned stories are doing exactly that, even if some of them stop a little short. It’s important not to mistake the stage furniture for the genre. Just because there’s a vampire or werewolf in the story doesn’t mean it can’t be SF. Similarly, just because there’s lasers and spaceships doesn’t mean that horror can’t present itself.

We could go on like this forever. There’s a lot to unpack within each genre, and we could spend years ferreting out what makes each of them tick. I’m a big tent guy and I enjoy both genres, so I’m more than happy in that fuzzy space between the genres… but I can see the benefits of taking a stricter approach as well. In some ways, Horror and SF are diametrically opposed in their goals and aspirations, and it’s worth considering that. I’ve read plenty in both genres, but there’s always room for more knowledge, which is one reason I participate in Vintage Science Fiction Month. It’s only a couple months away, so you best start planning your reading for January now too!

1 thought on “Vintage Science Fiction Month: The Intersection of Horror and SF”