I was pleasantly surprised by what is now referred to as It: Chapter One a couple of years ago. That film arrived in the midst of a semi-revival of Stephen King adaptations and its success (currently the highest grossing horror film of all time, though Jaws might take it if you adjust for inflation) guaranteed more King and, of course, the exciting conclusion to the It story, It Chapter Two. Unfortunately, by “exciting conclusion”, what I actually mean is… “repetitive slog”.

I have not read Stephen King’s novel, but as I understand it, part of its power comes from its structure. Basically, he’s telling the same story twice, in parallel, with the occasional interlude from Derry’s history to break things up. The dual narrative concerns a group of kids confronting a demonic clown, and the grown up versions of same, fighting same. The first movie broke out of that mold by necessity, and it was probably the right decision. However, in the process of doing so, they were setting the sequel up for failure. I suppose the writers of this could have really strayed far from the source material to provide something more original, but it’s not like that sort of approach is guaranteed either. And let’s not forget that King’s reputation for great setups leading to bad endings (actually a pretty good recurring meta-gag in It: Chapter Two, including a cameo from King himself). It’s not that King’s lazy or just couldn’t think up a better ending; he seems to genuinely write himself into corners. Whatever the case, the filmmakers opted for a more straightforward adaptation of the Losers as adults returning to Derry to face off against Pennywise, so it’s quite repetitive.

Like the first installment, this is a slick movie with great production value, fabulous casting, and generally good performances. Unlike the first movie, the scares here feel muted and perfunctory. The problem is that the kids at the end of the first movie figured out the trick to defeating Pennywise, so all the scares in this second installment are just going through the motions. The first movie relied a little too heavy on jump scares, audio stingers, and CGI, but ultimately worked because of the approach and good execution. This second movie leaned into all of those things people didn’t like, but the approach isn’t novel anymore and the execution is sporadic, so it all sorta falls flat.

The child actors in the first movie had a great chemistry together, and it really felt like you saw the bonding experience as it happened onscreen. In the second movie, all of that is gone, explained away by the conceit that when you move away from Derry you “forget” what happened there. What’s more, it takes forever for the characters to get back on the same page, and the plot quickly separates the characters before they can reestablish any rhythm. The whole approach reminded me a little of a video game sequel where your once powerful protagonist has to start over and rebuild all their strengths and abilities. The second act of this movie is essentially a fetch quest, with each character going off on their own to find some sort of talisman, which naturally leads to encounters with Pennywise (which, again, generally feel muted because we’ve seen all this sort of thing before). Some of these segments are more successful (Bev’s visit to her old apartment) than others (the one bizarrely goofy needle drop during what I think was supposed to be a jump scare?), but they take up way too much time and don’t get us where we need to be. 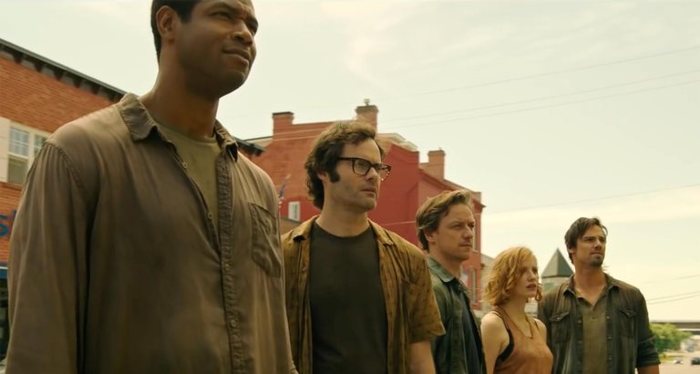 The actors are all doing their best, but the material is holding them back. Bill Hader’s deadpan humor is great. James McAvoy could have chewed up the scenery with his character’s stutter, but wisely kept those hammy impulses in check. Jessica Chastain is always fantastic, but again, she’s not given much to do here. Bill Skarsgård’s portrayal of Pennywise is still a highlight of the film… when they’re not CGIing him to death (and honestly, he’s pretty good even then). The other actors are all doing good work here too, but the structure of the film is letting them down. They never manage to reestablish the chemistry present in the first film, and when the film really tries to do that at the end, it somehow feels rushed and incongruous. The film does feature lots of flashbacks to the characters as kids, which you’d think would help given the aforementioned chemistry and bonding, but it only serves to further highlight the flaws in the current day portions of the film.

The plot also includes a few other encounters with Pennywise that are experienced by folks around town. Some of these are straight from the book, such as the gay couple getting attacked by local homophobes and then literally becoming a meal for Pennywise. Others I’m not sure about. While some of this stuff is well done (and better executed than the stuff featuring the adult Losers, perhaps because these other characters don’t know what they’re up against), it’s all completely superfluous. In a movie that’s nearly three hours long, that sort of thing should have probably been minimized in favor of keeping the story moving. 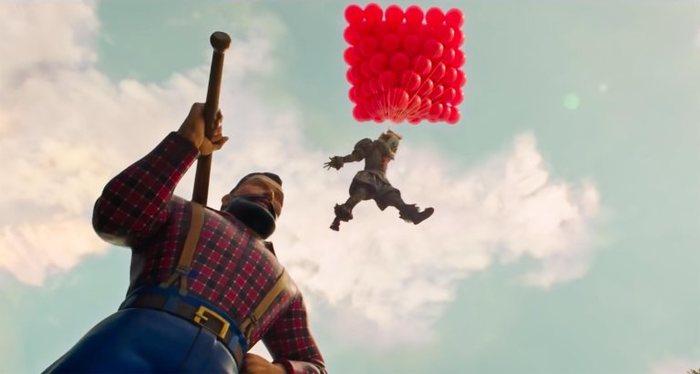 Then there’s the plan to defeat Pennywise. Despite having already figured out the secret to fighting Pennywise in the first film, the crew devises this elaborate scheme based on an old Native American ritual… that makes no sense. One of the Losers has done a bunch of research on the town and discovered this ritual that was used to fight Pennywise when he first arrived a couple hundred years ago… but no one seems to point out the obvious, which is: if this is what they used to fight Pennywise before, but Pennywise is still around, then the ritual clearly doesn’t work. Again, the crew has already fought Pennywise as kids and figured out the secret (Pennywise ran away at the end, so I guess that wasn’t entirely successful, but they figured out what was needed). The writers further rush the Losers into the confrontation in a way that feels contrived and clunky.

Speaking of Pennywise, one of the minor complaints from the first movie was that the extent and degree of his powers were unclear at best. This movie only further leans into this lack of clarity, which is part of what drives the lack of genuine scares in the film, and also makes the ending feel facile and unconvincing. On the other hand, the ending does kinda sorta make sense. I mean, it’s essentially the same as the first film and I don’t know why we had to wander through three hours of film to get to essentially the same place, but it works better than, say, a giant space turtle saving them (a probably exaggerated paraphrase of the book’s ending, which, again, I have not read).

Perhaps I am being too hard on this movie. It’s indulgent, bloated, and overlong, but it didn’t feel like three hours either? There’s some weird contradictory feelings this movie brings out in me. It’s clearly too long, but it also feels like there’s stuff missing? This is a repetitive story, but it doesn’t work here while it did in the first movie? Ultimately, I did not particularly like this film. I’m always tough on sequels to start with, and this one was primed to annoy me with its inherently repetitious plot and general sense of just going-through-the-motions. None of this is a particular surprise, but while the first movie would up greatly exceeding my low expectations, this one couldn’t even manage to clear the low expectation bar. Count me interested in whatever director Andy Muschietti tackles next though. The guy’s got some chops, for sure, and to be fair, this second It movie may have been an insurmountable challenge to start with… Anyway, stay tuned, for on Sunday, we’re going to post about more (probably disappointing) sequels to good movies.