1) Most obnoxious movie you’ve ever seen

Lots of candidates, but I keep coming back to Batman & Robin, for what I must assume are obvious reasons.

For some reason, this answer quickly resolved into a question: Which Robert De Niro pairing should I choose? It’s also a tough one because the writing and story can accentuate differences that might not be there if just comparing the actors themselves. Ranging from not so great movies like Flawless (De Niro with Philip Seymour Hoffman as a drag queen) and Showtime (De Niro and Eddie Murphy) to good movies I’m not so fond of like The King of Comedy (De Niro and Jerry Lewis) to that Goldilocks zone: De Niro and Charles Grodin in Midnight Run. 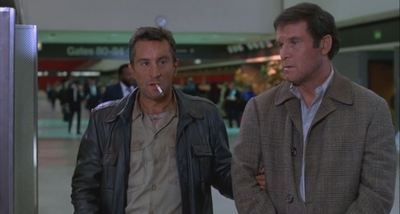 3) Which movie would you have paid to see remade by Ken Russell?

I would be curious to see Russell’s take on Alejandro Jodorowsky’s films like El Topo or The Holy Mountain. I mean, sure, it’d probably still end up as an indulgent mess, but it would be a different type of indulgent mess, which is interesting. (The other idea I had was Dune, but I suspect that would have ended up as… an indulgent mess.)

Emma Stone for now, but only because I feel like she’s more established at this moment. Robbie certainly has the potential to overtake and is charging hard, but has not quite reached that level just yet.

5) Which member of Monty Python are you?

I will not presume to insult any of the members of Monty Python by comparing myself favorably to them (also, I have no friggin idea).

6) Which movie would you have paid to see remade by Vincent Minnelli?

Minnelli is famous for his musicals, a genre I am not overly fond of, so this is a weird one for me as I’m not sure I’d pay money for him to remake a musical (or to turn something else into a musical).

The trick here is that I like Volonte’s spaghetti westerns better, but he was not the lead in said films (that would be Clint Eastwood), whilst Nero was often the lead (as in his most famous role as Django). I will go with Nero for that reason, but it’s close.

The original Godzilla, and it isn’t even close. 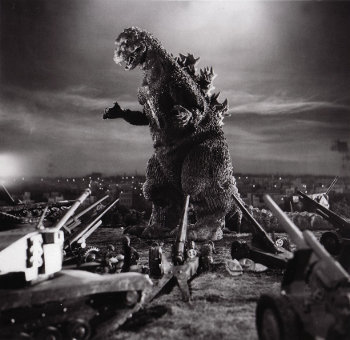 Lots of Kaiju movies are fun and I certainly haven’t seen all of them, but they mostly due pale in comparison to the original. Also, I feel like it’s unfair to pick a MST3K version of these movies (I’m particularly fond of their Mothra takes).

9) Which movie would you have paid to see remade by Stanley Kubrick?

Kubrick is one of my favorite directors, but the open endedness of these questions makes them really difficult for me. My first thought was A.I. Artificial Intelligence, but maybe that’s too obvious since it’s the film he was working on when he passed away. I really would be curious as to how different his version of the film would have been though.

I am sadly not familiar enough with either actress and must thus take a mulligan on this question.

11) Name a critically admired movie that you hate

I feel like I’ve answered this question before, so in the interest of not repeating myself with Easy Rider, I will go with Breathless. Undoubtedly important and influential, but really unpleasant to watch (could be a contender for #1 question above) and kinda a slog.

12) Which movie would you have paid to see remade by Elia Kazan?

Alright, so Kazan is famous for drawing great performances out of actors (“he directed 21 actors to Oscar nominations, resulting in nine wins”), so I’m thinking something like a big ensemble piece that doesn’t quite click. My first thought was something out of David O. Russell’s filmography. Another director who is known for getting good performances from his actors (and getting folks nominated for same), his movies never quite get to where I find them fully successful beyond the performances. Maybe a dumb choice, but let’s just say Joy.

Having already confessed my distaste for musicals in general, I feel like the answer reveals itself readily enough: Disney comedies. Son of Flubber, The Parent Trap, The Love Bug, and lots of other fun choices.

14) Which movie would you have paid to see remade by Alfred Hitchcock?

The streets are littered with the bodies of Hitchcock imitators, all of which made movies that would be rather fascinating if Hitch actually took them on. I feel like Brian De Palma’s early stuff, which was strongly informed by Hitch, still stands well on its own and doesn’t really need to be remade. Richard Franklin made some movies that might have been interesting if Hitch remade them (how about Patrick?) It might be interesting to see what Hitch would do with a M. Night Shyamalan flick. Or we could go the other way, and see what Hitchcock would do with a remake of Diabolique (a film I believe Hitch had a lot of respect for…)

Another tight race, but I’ll go with Channing Tatum, who seems to have a little more charisma and range on his side at this point…

16) Bad performance in a movie you otherwise like/love

Most of the performances in Phantasm technically qualify, even if I still love that movie to death and would never change a thing about it in a million years.

17) Which movie would you have paid to see remade by Howard Hawks?

Hawks was pretty damn versatile, which means I’d pay money to see him remake almost anything, though preferably something that has a good idea that needs the elevation a great director can bring. That still leaves this pretty open-ended. Damnit, I can’t think of anything (or rather, every movie I think of works, to the point where none do). If I cheat and look at other people’s answers, the two the jump out are True Grit (but that already has a great remake) and Captain America: The First Avenger (whose second and third acts could use some work, for sure).

This may be controversial, but I like The Birds more than Vertigo, so I’m going Tippi Hedren. Plus, she also brings Marnie and the inspired lunacy that is Roar to the table.

Everyone is probably going for The Maltese Falcon, so I’ll go with Ocean’s Eleven, which is a better movie than both the Falcon (sorry/not sorry) and the film it was remaking.

20) Which movie would you have paid to see remade by Preston Sturges?

I don’t hate Intolerable Cruelty like a lot of folks do, but I suspect Sturges would be able to whip it into better shape than the Coens managed.

Despite my repeated statement of indifference to musicals, yes. Just because I don’t like a thing doesn’t mean it has no right to exist, and I generally find myself answering “yes” to all of these types of questions (of which, there is always at least one on these quizes).

22) Which movie would you have paid to see remade by Luchino Visconti?

Not having seen any Visconti movies, I’m going to have to take another mulligan here.

23) What was the last movie you saw, theatrically and/or on DVD/Blu-ray/streaming?

Theatrically (and ironically given the seeming theme of this quiz), it was Lady Bird, which was delightful, well observed, moving, and funny, just like everyone sez (though I suspect we’ll see backlash soon enough – it’s a very good movie, but let’s not get too carried away).

At home, it was a rewatch of Elf. What can I say, I’ve been battling a head cold and ear infection, so I was in the mood for some holiday season comfort food. Like a lot of Will Ferrell movies, it’s the sort of thing that somehow improves with multiple viewings. 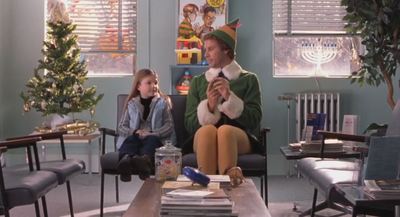 24) Brewster McCloud or O.C. and Stiggs?

Alright look, it’s not like I haven’t seen any Robert Altman movies (I’ve seen many of them!), it’s just that I haven’t seen these two particular Altman films.

25) Which movie would you have paid to see remade by Luis Bunuel?

I feel like I already wasted a decent answer to this in question #3. I must admit to being not terribly familiar with Bunuel either, and aside from his reputation for Surrealism, I’m not sure where else to go (um, Doctor Strange?)

Look, I’m sure most would go with one of those Altman movies and it’s also true that I never really got that much into Star Trek: Deep Space Nine, but he will always be Odo to me.

28) Which movie would you have paid to see remade by Ingmar Bergman?

Boyhood is talky enough might benefit from something more hefty that Bergman can certainly bring, but then, I probably still wouldn’t love the end result.

29) Best movie with a bird or referencing a bird in its title?

Hitchcock’s The Birds is far too obvious and has already been mentioned, so let’s try to find something else. Maybe Three Days of the Condor, but really I want to go with Where Eagles Dare, though it’s a film I should probably also revisit.

I certainly enjoy some Lancaster performances (big fan of The Killers and I just got sucked into Field of Dreams yet again the other night), but as a child of the 80s, I’m kinda obligated to go with Keaton on this one. Beetlejuice, Batman, and lots of other favorites…

31) In what way have the recent avalanche of allegations unearthed in the wake of the Harvey Weinstein scandal changed the way you look at movies and the artists who make them?

I’ve always tried to separate the art from the artist, but it’s only natural that in some circumstances this will become more difficult. For instance, Roman Polanski is a filmmaker whose films always call to mind the whole “fugitive child rapist” thing, even if they’re sometimes really good films. I totally understand the impulse to avoid these sorts of movies, even if I don’t always do so myself. I will say this though: the prospect of memory-holing huge swaths of film/TV because one member of the production did something despicable makes me uncomfortable. I’m not the censorious type, as partially evidenced by my answering “yes” to every question like #21 above, and while I don’t blame anyone for not especially wanting to view some of these movies, I also think the option should still be available. Context matters, and censorship won’t solve anything. That said, these assholes absolutely need to go down, and while many have lost jobs and whatnot, some should be facing much stiffer penalties (I’m looking at you, Weinstein). I suspect we’ll see more house cleaning in the coming years, which is apparently as it should be.

I don’t watch enough TV to give a good answer here, but I will say that a scant 20 years ago, there would be no question that movies were better. I’ve seen enough TV this year to say that you could probably make a convincing argument that TV is better, which is, again, something that wasn’t possible not all that long ago. So TV is most definitely much improved, while movies seem to be treading water. I still prefer movies, but I still watch more TV than I ever used to…

Phew, that was a tough one. But these quizes are always great, and I’m already looking forward to the next one…