I was just a hair too young for Stephen King’s apex in the mid-80s, meaning that I sorta got the gist of the phenomenon without really experiencing much of it. I remember the hype and even seeing commercials for King books on TV and various adults going crazy for his stuff, but as a young kid, I was less sanguine about scary stuff. I didn’t really get into horror (or, for that matter, reading) until the early 90s, but once I was on board, I certainly did burn through a bunch of Stephen King novels and film adaptations. One such event was the It miniseries that aired on television in November of 1990 (I viewed it on one of those fancy double-VHS sets in the mid-90s). I don’t remember much about It except for a vague outline of the plot and characters. I enjoyed it and could see why it was a popular story, but didn’t think too much about it. I should also note that I haven’t read the book, mostly because I’m the worst. But I can tell it’s one of King’s more popular works.

Enter It: Chapter One, the latest big-screen adaptation of King’s work (hot off the heels of the craptacular Dark Tower movie) that’s been lighting the box office on fire. In just a couple of weeks, it’ll have become the most successful King adaptation of all time, even adjusting for inflation (and there’s talk of it becoming the most successful horror film of all time as well). When I first heard of this adaptation, I wasn’t particularly intrigued, but there was a buzz surrounding the movie that did make me a little curious. This is usually a fruitful combination: good source material and competent filmmaking team, coupled with lowered expectations. As a result, I found myself greatly enjoying this movie, much more than I thought I would. It definitely has flaws, but it’s a fun, crowd-pleasing experience, such that its surprising success actually feels earned.

Derry, Maine appears to be a quaint little town on the surface, but its history is one of cyclic tragedy, and since children are beginning to disappear at an alarming rate, it seems this tragedy is still ongoing. Set in the late 80s, seven kids, each with their own hangups and fears, come to figure out and even confront the evil plaguing the town. This evil manifests itself as representations of their fears, but also and most often in the form of a clown named Pennywise.

The story is told entirely from the kids perspective, which is a notable change from the book/previous miniseries (which alternated between the kids and adult versions of the kids, both groups fighting It during one of its cyclical feeding periods), but one that I think works out well. Not having read the book, I can’t say for sure, but I suspect this sort of narrative structure works great on the page, but would be really difficult to pull off on screen. Plus, from what I gather, they made enough other changes to the specifics that this more straightforward approach also leaves open the possibility that maybe some of the characters won’t survive. I’m sure that, from a book reader’s perspective, this sort of tension is more meta; are we scared that a member of the Losers Club won’t survive? Or are we scared that killing one of those kids is just a terrible idea and would ruin the movie? Whatever the case, given the constraints of a single movie and a 1100+ page adaptation, this seems like a reasonable choice. 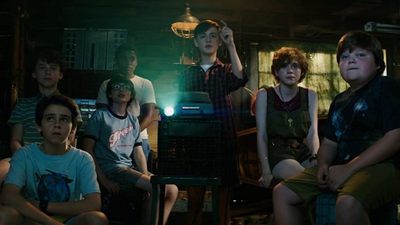 And the kids are great. Many a film has floundered on child actors, but every single one of the kids in this movie does a good job. They have great chemistry with one another and whether they’re tooling around on their bikes (evoking that 80s Amblin feel) or bickering with each other (in ways that provide a good, comedic release after the various horror tensions), they’re an entertaining bunch. Since there’s seven of them and this is a little over two hours long, the characters could feel like stereotypes, but each one has just enough individuality that they are at least distinct, recognizable, and likable on their own.

On the flip side, Bill Skarsgard does a great job as Pennywise. It couldn’t have been an easy task to reprise the role made famous by Tim Curry’s performance, but Skarsgard clears the bar. The film does rely too heavily on CGI for some of Pennywise’s scares, but when Skarsgard is allowed to give a quirky smile or contort his body in a practical way, it’s quite effective.

Director Andy Muschietti is obviously good at wrangling the kids and getting good performances out of them, but he has some visual chops too. It is a well composed movie, and Muschietti knows how to manipulate an audience. While he relies too heavily on audio stingers and jump scares, he is adept enough at executing them that these sequences don’t feel like cheap shots. There might be a few too many horror setpieces too, which can lead to fatigue towards the end of the movie and maybe muck with the pacing at times. On the whole, though, this is more calibrated to an audience viewing, and it’s supremely successful on that front. All the craft goes towards generating a crowd-pleasing experience. This may rub fans of slow-burn horror the wrong way, and I’m sure that King’s book allows for a much deeper, more immersive experience, but given the constraints, this film admirably achieves its modest goals.

There are several memorable setpieces. The opening with Georgie is very well done and compares favorably to the previous iteration (and, as I understand it, to the book as well). I particularly enjoyed the painting that Stan was terrified of, and that sequence was wholly terrifying. A scene in the library, where one of our characters discovers a historical tragedy involving Easter, then follows a balloon into the basement is quite good. The slideshow presentation when Pennywise shows up is also great. Some of the more simple interactions, such as Bev’s conversations with her father or the pharmacist, are also quite creepy. Most of the scary sequences achieve a certain base level of effectiveness, even the ones that rely on CGI.

It does feel like there could be a lot more depth here. It’s not entirely clear how Pennywise works or how the kids manage to defeat It, other than vague platitudes about fear. What little history we get is very affecting, but the runtime limits how much of this can be explored. I haven’t read the book, but I imagine many of these gaps are filled on the page. Again, this is understandable given the limitations of a film project.

I’m calling this It: Chapter One, but that’s only revealed in the ending credits. My guess is that they were hedging their bets here. They couldn’t possibly fit the whole thing into two hours and wisely chose to focus on the kids’ story (which, I will say, ends in a way that is satisfying enough that you don’t feel cheated), but the sequel wasn’t guaranteed. Well, given the box office performance, I think we can now assume that the sequel is forthcoming. Since it will take place 27 years later, they will need an all new cast of grownups, which will probably lead to some familiar faces (i.e. Jessica Chastain for Bev is a fan favorite).

From the Stephen King that I’ve read, I will say my biggest issue is the way he ends his books. I feel like he often writes himself into a corner and only barely manages to find a way out, if at all. I don’t remember details about the miniseries conclusion, but I do remember it being somewhat underwhelming (involving a giant spider). As I understand it, the book goes a little further, so perhaps there’s something interesting to look forward to there. Whatever the case, I’ll almost certainly be checking out the sequel.

This is a crowd-pleasing movie and entertaining experience at the theater. It may not be quite the revelation that the book was, nor is it as effective as some more “serious” horror cinema, but I don’t think it’s really trying to outshine either of those things. It’s just extremely well executed and fun, totally worth seeing in the theater. ***