I always joke that the Six Weeks of Halloween is totally better (two weeks better!) than most horror movie marathons, which are usually only reserved for the month of October, but really we’re all just pale imitations of Brian Collins, who ran a website called Horror Movie A Day, which is exactly what it sounds like. To clarify, that’s one horror movie (and review of said movie) every day for around six years. That’s 2500 reviews. This, gentlepeoples, is insane. He still posts reviews every so often, but no longer feels obliged to keep up the daily routine. Good for him!

One of the projects he worked on with his newfound freedom was Horror Movie A Day: The Book, wherein Collins has condensed his experience into one handy resource featuring a recommendation for every day of the year (plus a bonus, for leap years). Each month features a different theme, ranging from specific genres (Slashers, Killer Kids, Zombies & Cannibals, etc..) to countries of origin (Asian Horror) to more vague categories (Bat Shit Crazy Horror). Each recommendation has some meta information (i.e. dates, genres, etc…), an exerpt from the original HMAD review, and some more current reflections. 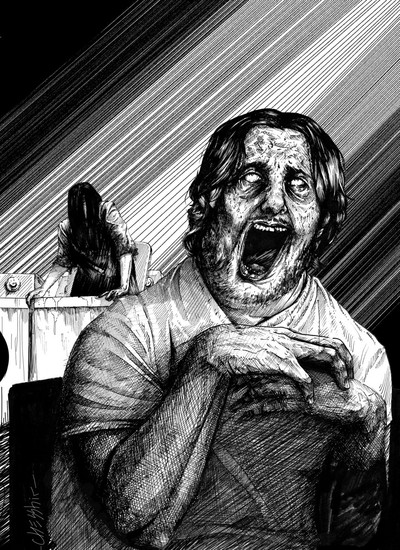 The best thing about the book is that Collins specifically avoided well-known, “famous” horror films. So you won’t find the likes of Halloween or The Exorcist gracing these pages, as Collins assumes that you’ve either already seen them or at least know about them. No, with a couple of arguable entries aside, this book is jam packed with the obscure, off-the-beaten path movies that even dedicated horror fans will find unfamiliar. Many classics are certainly referenced in the writeups, to be sure, but the choices themselves are well curated. They range from silent films (only one, I think) to obscure cult films of the 70s and 80s, to DTV efforts of the 90s and aughts. Many of these are maligned simply due to their distribution models, but Collins does a good job finding the gems in the rough. As far as I can tell, at least. For reference, I’ve only seen 52 of the 366 films on offer (which rather neatly works out to 1 per week in the hypothetical year it would take to play along with this book), though that number will increase, as I’ll be tackling several of these films in the coming weeks of the 6WH.

Of course, this obscurity also tends to limit the general appeal of a book like this. Many of the selections aren’t exactly classics of the genre, and with good reason, but I think Collins praise of the “B+” movie is actually quite admirable. It seems like a lot of people want to become experts these days, but perhaps the ubiquity of listicles and wisdom-of-the-crowds rankings has given a false sense of how one attains expertise. It’s fine to follow such lists, of course, but there are no shortcuts to expertise. You’ve got to experience the good with the bad, and Collins is well aware of that, even going so far as to feature a notably bad movie for each month. They’re bad movies, but bad in often fascinating ways. As noted in the introduction, there’s a lamentable trend these days to categorize films into “AMAZING!” or “GARBAGE!” with no room for anything in between. This book takes it as a given that you’ve already seen the obvious amazing stuff and takes you on a tour of the full spectrum, and for that, it is to be commended.

If you’re looking for in-depth criticism or analysis, this probably isn’t the book for you. Nor should you expect incisive capsules, a la Pauline Kael or Roger Ebert. Collins is a good writer, but these writeups tend to feel more like loose blog entries rather than full-blown reviews. I mean, this is a book that was compiled from a blog, so that should clue you in, but some might not know the context. There isn’t anything wrong with this approach in my mind (you’re reading a blog right now, potzer), but I could see it rubbing some folks the wrong way. There’s probably lots of complaints about naval-gazing or name-checking to be had here, and it’s true that Collins spends a lot of time on his experience with the movies rather than the movie itself. He frequently mentions his tendency to fall asleep, or delves into how he managed to keep the streak going whilst traveling, or how a movie played into some horror trivia night, or how having a child has shifted his perceptions, and so on. There’s also lots of discussion about filmmakers who only made one or two movies, then movied on, which can get repetitive, but as someone with expertise, he’s also good at tracing influences and providing contextual minutiae that you are not likely to find in traditional reviews. I never got bored by the book and generally enjoyed Collins’ writing, even if it does sometimes feel a bit disjointed.

I could have done with a little more metadata on each movie. Many of them have alternate titles and some have different runtimes available, so knowing the best one would be nice (and Collins sometimes discusses these sorts of things in the entry, but it would be good to have them more easily referenced). Keeping track of availability of all these obscure movies is a fools errand (i.e. what’s on Netflix Instant or Amazon Prime now might not be there tomorrow), but some of these movies have been out of print for a while, and even old, used DVDs go for exorbitant prices. Not really Collins’ fault and this sorta comes with the territory, but it’s still a bit frustrating.

Ultimately, the true value of the book is the curation. It’s a truly fascinating list of movies, even if I doubt I’ll ever get to all of them. For those playing along, the list is on Letterboxd, though I’d still recommend getting the book, especially for those looking for something new and exciting amongst the throngs of available schlock on streaming services and the like. I’m definitely leaning on it to provide some guidance during these esteemed six weeks of Halloween, and I suspect I’ll continue to do so for a while…