Without delving too deeply into defining Science Fiction (a contentious undertaking worthing of a separate post), there is a tendency to expand the bounds of the genre by applying scientific precepts to other, nominally supernatural stories. Witness Arthur C. Clarke’s infamous dictum: “Any sufficiently advanced technology is indistinguishable from magic.” And speaking of magic, one such sub-genre could be called the “technology of magic” story which layers a science fictional structure on top of fantasy (or horror) tropes. Nicole Galland and Neal Stephenson’s latest novel, The Rise and Fall of D.O.D.O. is one such technology of magic story. 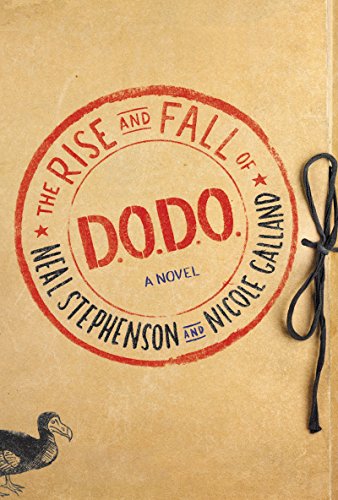 Melisande Stokes is a struggling academic linguist who inadvertently meets one Tristan Lyons, a handsome military man who recruits her for a secret research project. He reveals little of his motivations or goals or even who he even works for (as he flatly responds to one of Mel’s many questions about documents she’s translating, “Whether or not they are classified is classified.”) Nevertheless, Melisande’s polyglot skills quickly reveal some context: Magic was once a real, measurable phenomenon and driver of history, but witch practitioners reported a waning of magic in the early 19th century, eventually disappearing completely in 1851.

The scientific hypothesis is that this magical extinction event was precipitated by the invention of cameras, and in specific, an 1851 eclipse that was widely photographed. The explanation being that magic was some sort of manipulation of quantum physics and that photography represented a form of observation that resulted in a sorta magical wave-function collapse.

It’s a clever conceit that provides a good basis for the story. Once they realize what caused the disappearance of magic, our heroic duo get in contact with Dr. Frank Oda and his wife Rebecca East Oda, who have independently been working on a kind of Schrodinger’s Cat box, an isolation chamber that might prove ideal for practicing magic in the modern world. After making contact with a real, live witch named Erszebet Karpathy, our oddball band of heroes manage to show that magic does, in fact, exist. Once this hypothesis is confirmed, the government begins a more formal exploration with the hopes of restoring magic and exploiting it for their own strategic ends.

Of course, magic isn’t quite all its cracked up to be. Its applications are not immediately obvious until they stumble upon Erszebet’s ability to send someone back in time. Even this ability comes with numerous unexpected complications. It turns out that while you can travel back in time and make changes, you must do so on several “strands” of the multiverse until you reach some sort of critical mass where those changes become permanent (or, at least, observable in the present). Of course, this can get pretty tedious and there are additional dangers. If, for example, you were to attempt too large of a change, the universe responds with a literal explosion of magic referred to as Diachronic Shear. Let’s just say that it’s something to be avoided.

But our heroes persist and after some early success, the DODO (now revealed to be an acronym for Department of Diachronic Operations) organization grows at an alarmingly fast rate as they create new ODECs (i.e. Schrodinger’s Cat boxes that allow magic), recruit an army of historians, martial artists, and other subject matter experts, and of course identify Known Compliant Witches (KCWs) in pre-1851 Diachronic Theaters (so that present-day operatives that have been sent to the past have a way to get back to the present, naturally). One such historical contact is the Irish witch Gráinne, who appears very cooperative, but also has motives of her own. As the title of the book implies, the whole undertaking may be undone thanks to bureaucratic excess and manipulative figures like Gráinne…

The majority of the novel is comprised of first person accounts in the form of diaries, government memos, after-action reports, intranet chat logs, wiki-style howtos, epistolary accounts, and so on. In the beginning, this is primarily from Melisande’s perspective, but as the DODO organization grows, so too do the perspectives. As a literary device, this provides convenient cover for the SF genre’s info-dumping tendencies while also allowing you to get multiple perspectives on the same events. It works well and never wore out its welcome (unlike some other framing devices I’ve read recently).

Not having read any of Nicole Galland’s previous work (save some of the Mongoliad, another collaboration with Stephenson and several other authors), I can’t say for sure how the collaboration worked, but as a rabid Stephenson nut, I can tell you that there’s plenty of Stephensonian touches here. Of course, one would assume their collaboration involves shared obsessions, so this all makes sense. Still, there’s enough commonality between certain things here and Stephenson’s other work such that I feel confident that, for example, the whole subplot involving the underestimated Viking Magnus’s assault on a Walmart is very Stephensonian in concept and execution (As the character Rebecca notes in her journal entry: “Magnus is ludicrously hyper-masculine in ways that have been bred and trained out of modern-day men and so they have to deprecate his intelligence.” In fact, Magnus’ intelligence just manifests in a different way, similar to, say, the Shaftoe brand of genius being quite distinct from the more common Waterhouse conception (for the uninitiated, those are characters from Cryptonomicon and The Baroque Cycle.)) The Fuggers, an enigmatic family of well-connected bankers, also feel very Stephensonian (and while they are not implied to be immortal, their subtle methods of influence recall Enoch Root… or maybe I should just stop comparing everything to Cryptonomicon.)

From what I understand, many of the historical bits come from Galland (though, again, that’s not an unusual avenue for Stephenson either), and they jive well with the rest of the story. There are, perhaps, a few quibbles to be made about the plot. In particular, Gráinne’s rise to power seems precipitated by an event I’d be extremely wary about. The ending works well enough, though it does appear to be setting up a sequel/series and when combined with Stephenson’s reputation for endings, this may rub some folks the wrong way.

There’s still more than enough good to make up for any of the nitpicks though. The clever quantum underpinnings of magic, the slow exploration and tedius implications of the way magic works (uh, that’s a good thing), the droll and humorous takedown of beurocratic excess, the seemingly infinite parade of acronyms (my favorite being the Diachronic Operative Resource Center or DORC), the well researched historical panache, the winning and charismatic characters (even the villains are the types you love to roll your eyes at), it all contributes to a fun adventure tale that is well paced and entertaining. There aren’t a ton of completely new ideas here and you could argue that it isn’t as deep or idiosyncratic as Stephenson’s best, but it is a very well executed take on those tropes, and one that I prefer to many other offerings.

Overall, it’s a light, fun, entertaining romp reminiscent of Stephenson’s other collaborations (the Stephen Bury books, which he cowrote with his uncle George Jewsbury) or Reamde. It might not be as revelatory as Cryptonomicon or Anathem, but it’s a fantastic book. I will most likely put it on my nominating ballot for next year’s Hugo Awards.

Not much to go on when it comes to Stephenson and/or Galland’s next books, but in this interview, they mention that they’re both approaching the homestretch on solo projects, but are not ready to announce anything yet. Given the ending of DODO, I have to wonder how quickly we’ll see a sequel (or if it will even be written by these two authors again?) Time will tell, but I will most likely be reading whatever these two put out (and frankly, I should get on some of Galland’s back catalog).