Movies can be judged along many spectrums. One is the influence it has on the world. This is difficult to measure, but it seems ridiculous to say that a popular movie will have no influence on its audience. Unfortunately, this influence is often used to justify some of our baser censorious instincts. In doing so, I feel like our would-be censors often exaggerate the influence a film has. They also tend to assume that because a movie can be interpreted in some harmful way, that it always will be interpreted that way. By that logic, the Bible is the most dangerous book in the world (that might be a bad example, because there are some who might actually believe that, but I digress). Another spectrum to observe is that a movie is merely reflecting the culture it was created in. This one is particularly weird because it messes with causality. When someone does something horrific that resembles a movie, was it the movie that caused that? Or was the movie merely another expression of the same thing that caused the horrific event in question?

A few years ago, I read a book called Crystal Lake Memories: The Complete History of Friday The 13th. It’s a fascinating book, and not just because I’m inexplicably obsessed with that series of movies. It’s basically set up like an absurdly comprehensive Oral History (only it was published a few years before the concept was repopularized) of all the films. One of the interviewees was Tom McLoughlin, the director of Jason Lives: Friday the 13th Part VI (a Kaedrin favorite). 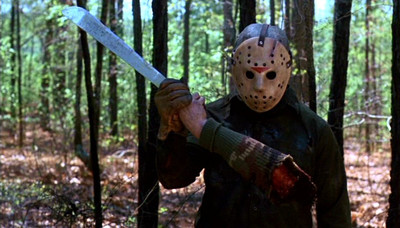 Jason is confused by our puny mortal form, but also by his influence

At one point, he discusses the two sides of the coin about doing a Friday the 13th movie:

A number of years after I did Jason Lives, I was watching an HBO special about teens who kill. They had this boy on there who was about 14. They asked, “Why did you kill your friend’s mom? What could have possibly been going through your head?” And he said, “Jason, man. I was thinking like Jason.” It really affected me-could a movie like this truly influence somebody?

The other side of the coin was that I was once directing a play in San Francisco, an all-out comedy. One night, after a performance, somebody was waiting for me, this very professional guy. He says, “Are you the director?” I said, “Yeah.” He says, “I noticed on your credits that you did one of the Friday the 13th movies.” And I immediately started making excuses. “You know – it was a fun thing, blah blah blah.” And he said, “I didn’t see the movie, but I just wanted to thank you.” I was stunned for a second, and then I asked, “Why?” He says, “Well, I’m a psychologist and we have a clinic up here in San Francisco where we work with disturbed kids. We have them put on these Jason masks and they take out their aggressions on stuffed dummies. By not being themselves and venting what they feel through this character, we’ve had a lot of wonderful breakthroughs. I just wanted to thank whoever is responsible for all this.”

Boy, was that something I didn’t expect to hear. I was just so blown away that somebody of authority and experience thought that Friday the 13th was a positive thing.

I was reminded of this anecdote because I read Yoon Ha Lee’s recent post, The Problem With Problematic:

I feel this is the wrong question.

Individuals are hurt by whatever hurts them. And that’s not always something an author can predict–given the number of individuals in this world that’s a losing proposition, to try to write a work that never hurts anyone. I was not hurt by Palmer’s exploration of gender and society and use of pronouns, but again, trans people are not a monolith; and I want to be clear that people who noped out of the novel because of the pronouns (or any other reason) are entirely within their rights. I do think she was doing something interesting and definitely science fictional and that that’s fine, and that she should not have been prevented from writing with this device.

All this just to say–readers are so individual in their reactions that “never write something hurtful” is untenable.

I think this is related to the going trend these days, which is to ask authors not to write works that are “problematic.” But what do we really mean by that? Analysis of, say, racist or sexist elements in media is valuable, and we need more of it. But sometimes what I see is not that, but “don’t write problematic works” in the sense of “don’t write things that I consider hurtful.”

The funny thing about this, and the thing that I think surprised McLaughlin is that the opposite is also true. To paraphrase: But is it helpful? Individuals are helped by whatever helps them. And that’s not always something an author can predict. Sometimes it even comes from the most unlikely of sources, like trashy Friday the 13th movies.