1) Name the last 10 movies you’ve seen, either theatrically or at home

Zoinks! Good thing I try to keep Letterboxd up to date (if we’re not friends there, we should be). Let’s take a gander:

Phew, that’s a lot of movies.

The first thing that came to mind was Denethor’s feast whilst he sends his son out to die in The Lord of the Rings: The Return of the King. I mean, it’s not a fun scene, but for some reason very memorable, including the food being served (which looks tasty, I guess, certainly a feast). 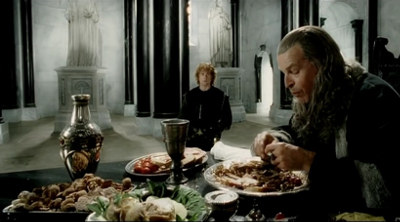 Upon further reflection, other candidates include: the scene in which Orson Welles interrupts his own movie to order more food in F for Fake, the titular meal in Soylent Green, the campfire scene in Blazing Saddles, and, of course, most scenes in Tampopo.

I love both of these movies, but Rear Window strikes me as the more well-rounded choice whereas Dial M for Murder feels like trash elevated to greatness solely by Hitchcock’s force of will (nothing to sneeze at, for sure, but Rear window has it all). Rear Window works on many more levels, even if I’d watch either of these again in a heartbeat.

4) Favorite song or individual performance from a concert film

Honestly not a big fan of concert films. Does The Blues Brothers count? I kinda like that one, I guess.

Excluding another film from the same director, if you were programming a double feature what would you pair with:

I have never seen this, but now I want to. From the description, I’ll go with The Wild Bunch. Looking at other answers, though, I see Reservoir Dogs and am now kicking myself.

I’ve actually seen this one! I’ll go with this year’s exquisitely staged The Witch as the pairing (though maybe The Blair Witch Project would be more fitting, given its more explicit mock-documentary nature… but then, The Witch has so much verisimilitude that it approaches mock-documentary as well. Hrm.)

Another one I have not seen, but from the description alone, the answer has to be American Graffiti, right?

Not seen this one either, but judging from the description, let’s say Bonnie and Clyde.

Again, I have not seen but from the description, let’s say McCabe & Mrs. Miller.

Nope, not this one either (I’m the worst), but judging from the description, let’s just say El Topo… though I should probably watch Zachariah first because it seems vaguely irresponsible to recommend El Topo without really confirming that it fits.

The Princess Bride seems an obvious choice here. I suppose nostalgia plays a role in how much I like this movie (I mean, I was basically the Fred Savage character – a kid sick and in bed, objecting to the same girl cooties moments, etc… – when I first saw this), but I’ve seen it recently and it still retains that almost timeless fairy tale feeling.

12) What is the sport that you think has most eluded filmmakers in terms of capturing either its essence or excitement?

Wrestling. No, not professional WWF/WWE stuff, the amateur stuff that’ll be on the Olympics at 3 am on CNBC sometime late next week. Few movies have even attempted it, notably Vision Quest (oy) and Foxcatcher (a slog, not really about wrestling, per say). Of course, I’m not really holding my breath on this one either.

The Seventh Seal I guess? I mean, not really a fan of either (or, sadly, Bergman in general – remember this when we get down to the blasphemy/contrarian question below)

First thought is Brazil, an epic three-disc study in commercial filmmaking. There are lots of better movies in the collection, but it’s the extras here that put it over the top. Troubled productions are always more interesting than normal ones, even if the resulting film (and various cuts) never quite live up to the promise of the material.

15) In the tradition of the Batley Townswomen’s Guild’s staging of the Battle of Pearl Harbor and Camp on Blood Island, who would be the featured players (individual or tag-team) in your Classic Film Star Free-for-all Fight?

Well, I’ve actually seen Throne of Blood, so I guess that sez something, eh?

I’d say popcorn, but usually when I go to the movies I get soft-pretzel bites. They’re usually terrible too, but good theaters (i.e. that time I went to Alamo Drafthouse) sometimes do homemade soft pretzels that are awesome, and I love them. But popcorn is the safe answer, as that’s always actually available, and usually fresh popped.

I have never seen it, but I think that if you look at my answers to all of these “yes or no?” questions over the years, I can safely say “yes” (since, you know, I’ve never said no in answer to one of these questions, ever.)

19) Name the documentarian whose work you find most valuable

Errol Morris works here. Opened my eyes to great documentary filmmaking with The Thin Blue Line, and has continually surprised me throughout his career, even with supposed trivialities like Tabloid.

The Godfather: Part II, though that’s a pretty fabulous one-two punch for 1974. Still, something about the Godfather‘s epic sweep bowls me over in ways that The Conversation never has…

Can’t say as though I actually seek out movie locations, but I do love the Philly Art Museum steps from Rocky, and it’s even better at night (looking back through the city, all lit up, is nice).

22) If you could have directed a scene from any movie in the hope of improving it, what scene would it be, and what direction would you give the actor(s) in it? (question submitted by Patrick Robbins)

This is an impossible question, but I came up with an answer because this movie comes up again below: There’s a scene in The Thing where Wilford Brimley has been locked up in the shed for a while, but kinda escaped into some underground tunnel and started… building a spaceship? Out of junk that was laying around? I would have reshot this scene such that the spaceship would not be completely visible and thus would be more ambiguous as to what it actually was (I would also revise the dialog to maintain the ambiguity). All you need to know is that he was up to something, not that it was actually a spaceship, because the spaceship is sad looking and stupid.

24) What is your greatest film blasphemy or strongest evidence of your status as a contrarian? (H/T Larry Aydlette)

There’s several examples above (i.e. disliking Linklater’s talky pieces, indifference to Bergman, not having seen the majority of movies explicitly referenced in this quiz, etc…), but I’ll say as a general point of blasphemy/contrarianititvity, I don’t like slow, plotless films. It’s not that they can’t be good or that I can’t appreciate them at all, it’s just that a film has to be really, really good in order for me to really get into it, and apparently my threshold for this sort of thing is much higher than most critics/film lovers. Go figure. I was much more willing to put up with this kind of indulgent wanking earlier in my life, but I’m getting to an even more impatient point in my life now, I guess. Maybe I’ll rebound, but I’m not counting on it.

This question was sorta asked before on Ms. Halsey’s quiz, only it didn’t limit the timeframes. My answer then was the one-sheet for Vertigo: 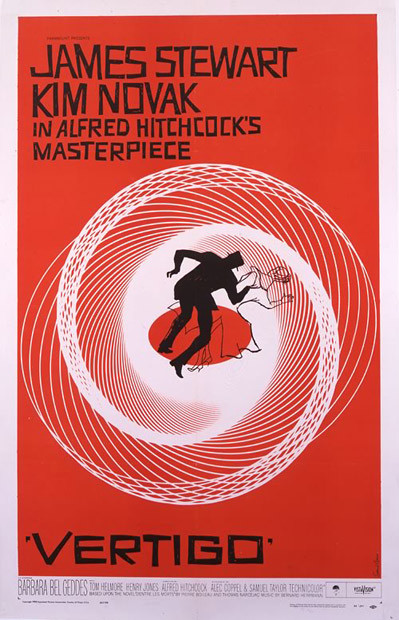 Indeed, a classic, even if there are probably hundreds of others that I’d like just as much, like: 2001: A Space Odyssey, Nosferatu, The Cabinet of Dr. Caligari, Dr. Strangelove: or, How I Learned to Stop Worrying and Love the Bomb, Anatomy of a Murder, and Metropolis. 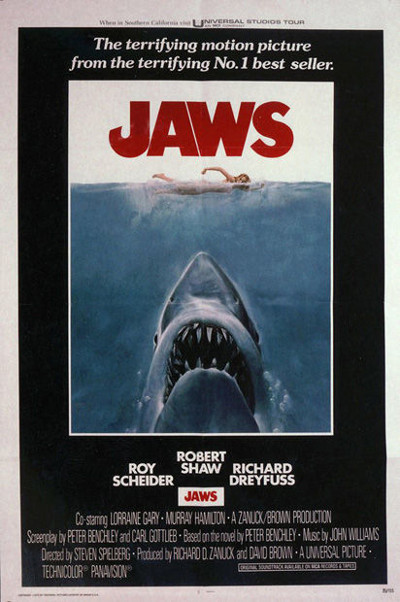 But that’s probably too obvious, so let’s go with Halloween: 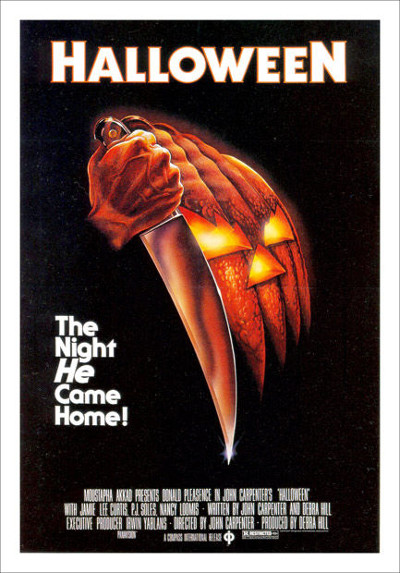 Also of note: Alien, Star Wars, E.T., The Godfather, The Exorcist, Indiana Jones and the Raiders of the Lost Ark

WarGames is the more memorable and probably more prescient of the two, I think.

28) Your candidate for best remake ever made

Either John Carpenter’s The Thing or David Cronenberg’s The Fly. They’re both so good that I find it impossible choose between them though.

29) Give us a good story, or your favorite memory, about attending a drive-in movie

Sadly, I do not have any memories of drive-in theaters and it’s quite possible that I’ve never been to one. I suppose I was old enough, and it may have happened, but I don’t think so. My parents weren’t much into movie theaters in general and my movie-going heyday began in the late 80s, early 90s, at which point, drive-ins were mostly dead.

The Hound of the Baskervilles might skirt horror I guess, but it will have to do, and it’s really about the subversion of horror, so I feel ok with that.

It feels so boring to say Se7en or even Seven Samurai, but then, here we are.

32) Is there a movie disagreement you can think of which would cause you to reconsider the status of a personal relationship?

Nope. I suppose such a thing is possible, but I can’t imagine that being the only thing at work in that particular relationship (i.e. it would be the tip of an iceberg in a much deeper component of our relationship).

Traffic is more stylistic and tackles a subject that is orders of magnitude more complicated without resorting to any trickery. Both are good movies though.

I suppose I can see the thought process here, but they seem to maintain a pretty good mix right now (i.e. heavy on the pre-1960 stuff, but not exclusively so) and I’m generally not one for arbitrary rules like this. Not something I’d sign on to, but more power to you, I guess.