My Crom-approved, Conan yeast DIPA (tentatively titled The Enigma of Steel) has been happily fermenting away for about two weeks now, and it’s been dry hopped for the past week or so. In previous batches, I only dry hopped with 1 or 2 ounces, but this time, I went with two additions of 2 ounces, because why not? Can’t have enough aroma, I say. So here’s what I used:

That Galaxy smelled absolutely fantastic, and makes me want to do a down under IPA of some sort (incorporating stuff like Motueka and Riwaka, maybe Nelson Sauvin). Anywho, kegging will commence in the next couple days, and I’m really looking forward to this sucker. The fermenter itself smells rather awesome. Cannot wait.

Update 3/26/15: And it’s in the keg! It smells absolutely amazing. All sorts of juicy tropical fruits, just a little floral character, pretty much exactly what I was going for. Now I just need to force carbonate it. This is going to be so great. The little sample in the picture below is a bit on the turbid side because all the sediment is coming out of the keg right now, but it has a nice light color and will look great once the yeast settles and gets expelled… 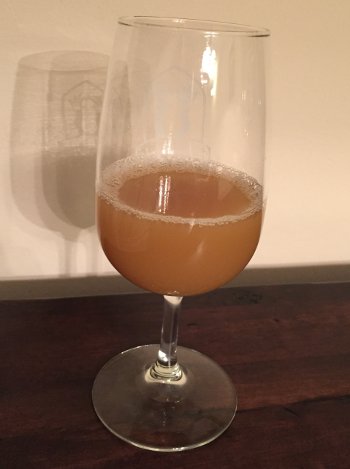 Final Gravity: 9 Bx, which translates to 1.012 and about 8.1% ABV. This is definitely a higher attenuation than I was expecting (somewhere around 83%), but it seems to be working out well enough. The bitterness in what I sampled seemed pretty light (exactly what I wanted), so the high attenuation actually matches my strategy well.

Trying to decide what my next batch will be. I was originally thinking about some sort of summer saison, but I might be able to squeeze something in before it gets warmer out…

Update 3/29/15: It appears that my zeal in dry hopping and lack of vigilance in transferring the beef from the fermenter to the keg means that too much hop sediment made its way into the keg and have now clogged up the dip tube (i.e. the tube thingy that the beer goes through on its way to the tap). This is most distressing! I tried letting it sit a couple of days, I tried agitating the keg a bit, and I even tried throwing the CO2 line in through the out connector (i.e. shooting CO2 down the dip tube), but it’s still clogged. I was really hoping to get this resolved without having to crack open the keg, but that seems unlikely at this point. I’m pretty sure I’m going to lose some aroma when I release the pressure, and I want to avoid doing that as much as possible. I actually grabbed another keg, and will be racking the beer from the clogged keg to the new one, being extra careful while transferring to ensure no sediment makes its way through (will probably use one of those mesh strainer bags over the end of the racking cane to minimize debris). Lesson learned!