Guardians of the Galaxy is the second Marvel Universe movie of the year, and since this occasions a referendum on the series as a whole, I think I’ve finally bought completely into this whole Marvel Universe thing. To be sure, I’ve always enjoyed the movies, but in looking back at the blog, I found that I was almost never particularly excited about any of them. At best, there were a few appearances on the Honorable Mention portion of my annual Top 10 lists and honestly, there are only two comic book movies that actually appeared on a top 10 since 2006 and neither were Marvel movies (one was The Dark Knight, the other was Kick-Ass). It wasn’t until Captain America: The Winter Soldier and the cumulative effect of repeated rewatchings of The Avengers that I started to get really excited about the series. Indeed, I think part of the appeal of these Marvel movies is their uncanny rewatchability. Even the worst of the films (Iron Man 2) benefits greatly upon repeated viewings, and as the series of Marvel movies goes on, the interconnected pieces start to underline and reinforce one another without burdening any individual movie (with the possible exception of Iron Man 2, which certainly suffers under the weight of Avengers setup).

With Guardians of the Galaxy, Marvel proves that it is firing on all cylinders. It’s not a perfect movie, but it does exactly what it needs to do, and the fact that Marvel has been able to make a movie this weird, yet still court mainstream awareness and success. As I mentioned last week, this was one my most anticipated movies of the year for two primary reasons: One, I knew almost nothing about it. This sets it apart from most other comic book movies, which I’m usually familiar with in one way or another and thus come with varying degrees of baggage. Not so for Guardians. Second, the talent involved is intriguing. James Gunn is a really odd choice, but then, this is a really odd movie. Part of that is Gunn’s goofy sensibility coming through, but the fact that Marvel was able to recognize and court that sort of talent is admirable.

The acting talent was also interesting. Like the rest of the Marvel movies, they got some recognizable people, but not A-list stars, but this group works very well together. They have great chemistry, but also work really well together. Chris Pratt’s Peter Quill/Starlord has a sorta naive Luke Skywalker component mixed with cocksure Han Solo charisma. Zoe Saldana imbues Gamora with a sense of gravitas that works well, yet is not so serious as to be devoid of levity (her line about “pelvic sorcery” is a standout that will surely enter the geek lexicon, if it hasn’t already). Bradley Cooper provides a surprisingly effective voice acting performance for Rocket (I mean, he’s not at Scarlett Johansson in Her levels awesome, but he is very good), and the CGI racoon he’s playing works way better than I think anyone could have hoped for. Vin Diesel has perhaps the least to do, but Groot is the most likable character of the bunch and heck, Diesel has done this thing pretty well before. Finally, while Dave Bautista may have made a name for himself as a professional wrestler, he frankly steals the show on several occasions as Drax, displaying excellent comedic timing in addition to the more expected physical presence. 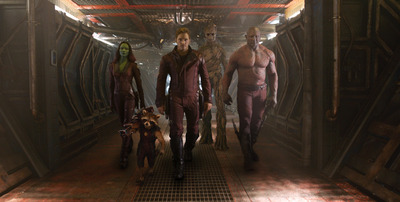 The story centers around a typical Marvel MacGuffin, which I admit is getting a bit tiresome. Then again, they are finally starting to talk about these things as Infinity Stones, which I’m guessing will become important in Avengers 3. Anyway, Peter Quill/Starlord finds the MacGuffin, but it turns out that evil warlord Ronan wants to use it to destroy planets. Ronan sends Gamora to retrieve the stone from Starlord, but she has motivations of her own. Rocket and Groot are bounty hunters who get caught up in Gamora and Starlord’s fight. They meet up with Drax, who wants to avenge his family’s death at the hands of Ronan.

Ronan is fine as a villain, by never really transcends being a generic bad guy. Thanos makes another appearance here, and I feel like the movie wastes his involvement. We are constantly told how powerful he is, but we never see him do anything. We’ve got plenty of time for that before Thanos hits in Avengers 3, but still, it would be nice to get more here. In any case, while Ronan isn’t a hugely inspiring villain, he represents enough of a threat and the stakes are high enough that the movie doesn’t really suffer.

The real fun of the movie, though, is watching the Guardians come together. Indeed, I think this is a strength of all the Marvel movies. The best bits are the little interpersonal touches, like the Schwarma bit after The Avengers, Bruce Banner nodding off as Tony Stark bores him at the end of Iron Man 3, or Black Widow haranguing Captain America about his love life in Cap 2. And this movie is full of characters coming together and connecting like that. It’s just fun, and that’s what makes this movie work.

From a visual perspective, Gunn knows what he’s doing and manages the large scale battle sequences and CGI extravaganza well (certainly better than the Star Wars prequels), even if some of it is unnecessary. Some of the close-up hand-to-hand combat can be a bit difficult to follow, but it never approaches the worst of the aughts (when a lot of action was simply incomprehensible) and some of it is actually fantastic. For the most part, it’s a very visually pleasing movie. The soundtrack, comprised of lots of popular 70s hits, works extremely well. It actually functions as part of the story, since they all come from a mix tape that was given to Starlord by his dying mother on Earth (and it’s his only real connection to his former home). The actual choices are an intriguing mix. And “mix” is the perfect name for it, as it is genuinely diverse in terms of what is included. This isn’t a Forrest Gump nostalgia-fest, it’s an eclectic mix of fun little songs that matches the tone of the movie perfectly.

So what we’re left with is an intensely fun adventure movie, taking on some of the best aspects of Star Wars and space opera in general, mixing that with some grand Spielbergian adventure, all with a unique and decidedly goofy perspective that works really well. Marvel seems to have taken some huge risks with this movie, and they are indeed paying off big time. I cannot wait to watch this again, and this one is almost certainly in my top 3 Marvel movies. Plus, we’ve got a sequel coming, not to mention Avengers 3. This is all very exciting, and I’m greatly looking forward to Marvel’s next phase (though I have to admit that I’m very disappointed that Edgar Wright has left Ant-Man – then again, I’m hoping that since they were already so far along, much of Wright’s perspective will remain intact…)