After six long weeks of fermentation (three primary and three secondary), it was finally time to bottle the barleywine and hot damn, it seems to be in rather fantastic shape right now. Add in a little carbonation and this stuff should be prime. Amazing caramel and dark fruit notes, and the bourbon oaked version seems to have taken on more of that character here than my RIS did… Speaking of which, I went with the same approach as the RIS. Primary fermentation was all together, but when I transferred to secondary I split the batch, leaving one alone and adding bourbon soaked oak cubes to the other. At bottling time, I bottled some of the plain barleywine, did a 1:1 blend and bottled some of that, and then the remainder of straight bourbon oaked beer. Also of note, the beer looked really pretty, especially when I held it up to light, a gorgeous dark amber color that isn’t quite as prominent in the picture below, but it’s still a nice looking beer. 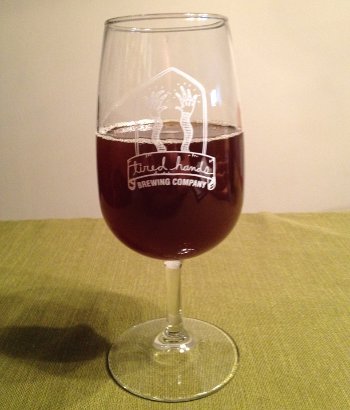 Final gravity was somewhere in the 12.6 Bx to 12.7 Bx range for all three variants, which translates to about 1.023. Astute readers may remember that I had reported the gravity as 1.017 when I was racking to secondary, but I must have been reading the Refractometer wrong or something, because there’s no way the FG should go up. Regardless, this still represents somewhere around 74% attenuation (and around 9.3% ABV), which is pretty good, and 1.023 should provide a nice rich and chewy mouthfeel without being too overwhelming. The RIS finished at 1.029, which seems awfully high, but which tastes really good, so we should be in good shape.

Like I said, this batch smelled and tasted rather awesome even this early in the process, so I can’t wait for these to condition in the bottle. I figure I’m in for another 3 weeks or so before it’ll be ready, though I’m sure I’ll check one of the “transition” bottles (I separated the first couple bottles after each transition from straight barleywine to the bourbon oaked version because of the liquid in the tubing made for an inconsistent blend, though I’m sure the beer will be fine).

At this point, I’m unsure if I’ll do another batch before the heat of summer really kicks in. If I do, it may just be a small 4% saison for the keg. Next fall, I’m planning on doing a Scotch Ale (perhaps with a similar bourbon oak treatment) and maybe something like a black IPA (or whatever the heck you call that stuff). I also want to give the Imperial Red ale another chance someday. But for now, I’ve got a few cases of barleywine and stout to work through, which should last me a while (and quite honestly, I’d much rather free up those bottles than scrape the labels off these other ones because damn, that’s an annoying process).