A sort of companion to my Russian Imperial Stout (which I named Bomb & Grapnel), this is another beer I’m hoping to clock in at ~10% ABV. As with the RIS, I’m going to brew up a full 5 gallon batch, then split the result into two secondary fermenters. One will simply condition, the other will get an addition of bourbon soaked oak cubes (just like the RIS). At packaging time, I’ll bottle some of each, then a blend of the two. With the RIS, the blend actually came out the best, though maybe the bourbon oaked one will hold up better over time (alas, only one way to find out). 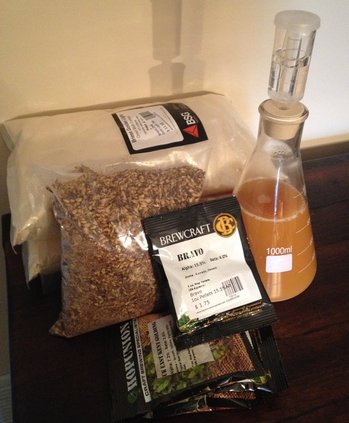 I’m shooting for something in the 10-11% ABV range here. Now, §ucaba is 12.5-13.5% ABV, but as I understand it, this is difficult to obtain for mere mortals like myself. Something about the laws of physics not operating the same in Firestone Walker’s warehouses? Whatever, the point is that this recipe isn’t quite the beast that §ucaba is…

I tried to keep my specialty grains reasonable as well. I think one of the reasons my RIS had such a high FG was that I included too much in the way of unfermentable sugars. So I toned that down here. I also added a small simple sugar addition, which should help keep that attenuation in check. Fingers crossed.

For the hops, it seemed pretty straightforward. Bravo for bittering and East Kent Goldings for late kettle additions, just like §ucaba. This puts the beer firmly in English Barleywine territory. According to my calculations, the IBUs should be somewhere in the 40-50 range, which is actually a little low, even for an English Barleywine, but then, §ucaba clocks in at 42 IBUs, so I’m actually on track.

For the oak cubes, I chose Hungarian Medium Toast (supposedly less intense than American oak, but more intense than French oak) and started soaking them in bourbon a couple months ago. I think one of the issues with the RIS was how long I kept the oak in bourbon, so hopefully the additional time will yield more complexity and less char (among other harsh tannins, etc…) Depending on how this goes, I may also keep this batch in secondary for an extra week as well (so 3 weeks primary, 4 weeks secondary).

Firestone Walker’s house yeast is rumored to be similar to Wyeast 1968 (London ESB, same as WLP 002), but that has relatively low attenuation and low alcohol tolerance (which is yet another reason to question the laws of physics at FW). I ended up going with Wyeast 1028, which has a much better attenuation range and one of the higher alcohol tolerances (11%, which should work here). Also, since this is a big beer, I did a yeast starter. I’ve had trouble making starters in the past because I never took into account how much water is lost to evaporation. This time, I managed to get it almost right. Started with 1250 ml of water and 1/4 cup malt extract, and ended with about 900 ml of 1.042 wort (slightly high, but right around the 1.040 I was shooting for).

On brew day, the Original Gravity ended up at 22.3 Bx or 1.094, slightly lower than I was shooting for, but it should still be fine. I installed a blow off tube instead of the airlock, as I’m anticipating a pretty active fermentation.

So that just about covers it. This one should take a while, so I anticipate doing one more batch of something before the heat of summer makes brewing a bit more difficult. I’ll probably do something sessionable that I’ll keg, like a 4% pale ale or maybe a light saison for some summer drinking fun. Next up on the big beer front would be a Scotch ale, which may also get the oak treatment described above (though it’ll likely also be lower in ABV)…