The movie lover’s dream service would be something we could subscribe to that would give us a comprehensive selection of movies to stream. This service is easy to conceive, and it’s such an alluring idea that it makes people want to eschew tried-and-true distribution methods like DVDs and Blu-Ray. We’ve all heard the arguments before: physical media is dead, streaming is the future. When I made the move to Blu-Ray about 6 years ago, I estimated that it would take at least 10 years for a comprehensive streaming service to become feasible. The more I see, the more I think that I drastically underestimated that timeline… and am beginning to feel like it might never happen at all.

MGK illustrates the problem well with this example:

this is the point where someone says “but we’re all going digital instead” and I get irritated by this because digital is hardly an answer. First off, renting films – and when you “buy” digital movies, that’s what you’re doing almost every single time – is not the same as buying them. Second, digital delivery is getting more and more sporadic as rights get more and more expensive for distributors to purchase.

As an example, take Wimbledon, a charming little 2004 sports film/romcom starring Paul Bettany and Kirsten Dunst. I am not saying Wimbledon is an unsung treasure or anything; it’s a lesser offering from the Working Title factory that cranks out chipper British romcoms, a solid B-grade movie: well-written with a few flashes of inspiration, good performances all around (including a younger Nikolai Coster-Waldau before he became the Kingslayer) and mostly funny, although Jon Favreau’s character is just annoying. But it’s fun, and it’s less than a decade old. It should be relatively easy to catch digitally, right? But no. It’s not anywhere. And there are tons of Wimbledons out there.

Situations like this are an all too common occurrence, and not just with movies. It turns out that content owners can’t be bothered with a title unless it’s either new or in the public domain. This graph from a Rebecca Rosen article nicely illustrates the black hole that our extended copyright regime creates: 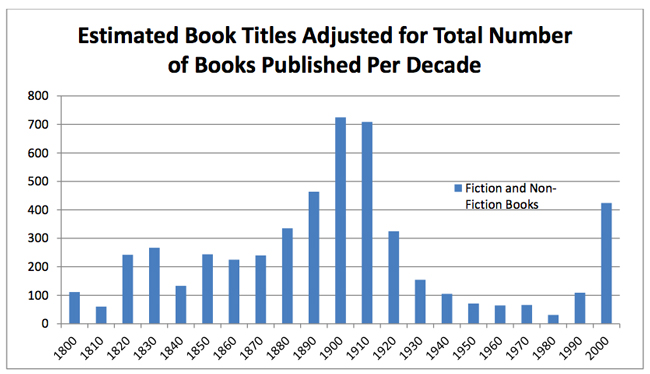 [The graph] reveals, shockingly, that there are substantially more new editions available of books from the 1910s than from the 2000s. Editions of books that fall under copyright are available in about the same quantities as those from the first half of the 19th century. Publishers are simply not publishing copyrighted titles unless they are very recent.

The books that are the worst affected by this are those from pretty recent decades, such as the 80s and 90s, for which there is presumably the largest gap between what would satisfy some abstract notion of people’s interest and what is actually available.

This is not a gently sloping downward curve! Publishers seem unwilling to sell their books on Amazon for more than a few years after their initial publication. The data suggest that publishing business models make books disappear fairly shortly after their publication and long before they are scheduled to fall into the public domain. Copyright law then deters their reappearance as long as they are owned. On the left side of the graph before 1920, the decline presents a more gentle time-sensitive downward sloping curve.

This is absolutely absurd, though it’s worth noting that it doesn’t control for used books (which are generally pretty easy to find on Amazon) and while content owners don’t seem to be rushing to digitize their catalog, future generations won’t experience the same issue we’re having with the 80s and 90s. Actually, I suspect they will have trouble with 80s and 90s content, but stuff from 2010 should theoretically be available on an indefinite basis because anything published today gets put on digital/streaming services.

Of course, intellectual property law being what it is, I’m sure that new proprietary formats and readers will render old digital copies obsolete, and once again, consumers will be hard pressed to see that 15 year old movie or book ported to the latest-and-greatest channel. It’s a weird and ironic state of affairs when the content owners are so greedy in hoarding and protecting their works, yet so unwilling to actually, you know, profit from them.

I don’t know what the solution is here. There have been some interesting ideas about having copyright expire for books that have been out of print for a certain period of time (say, 5-10 years), but that would only work now – again, future generations will theoretically have those digital versions available. They may be in a near obsolete format, but they’re available! It doesn’t seem likely that sensible copyright reform could be passed, but it would be nice to see if we could take a page from the open source playbook, but I’m seriously doubting that content owners would ever be that forward thinking.

As MGK noted, DVD ushered in an era of amazing availability, but much of that stuff has gone out of print, and we somehow appear to be regressing from that.

3 thoughts on “The Myth of Digital Distribution”