The Six Weeks of Halloween horror marathon continues with this BBC series written by Steven Moffat, who would go on to produce the most excellent Sherlock series as well as take on the show running responsibilities for the most recent seasons of Doctor Who. Like Sherlock, Jekyll is a modern-day retelling of a famous Victorian-era story, in this case Robert Louis Stevenson’s famous novel, The Strange Case of Dr Jekyll and Mr Hyde.

As with a lot of other British shows, this one is a simple, 6 episode season that has had no real follow-ups (though I suppose Moffat left things open enough in the end to continue the story if needed). Once again, this is a bit of a modernization of the story, so Moffat is able to play with the conventions established in Stevenson’s original novel, even to the point of self-awareness by referencing Stevenson’s novel.

The show starts a little on the slow side as it establishes the setting and situation our main protagonist is in. Many mysteries and conspiracies are cycled through, and our main character has quite the interesting arc, making you wonder who is the real villain of the story. For the most part, this plays out in a grand tradition of fun, as you learn more and more about Jekyll and Hyde, their origins, and how they impact those around them. I don’t want to give much away, but there are plenty of red herrings and mysteries that are eventually resolved in a somewhat satisfactory manner.

The production is generally well orchestrated, with solid visuals and music, if perhaps not quite as polished as a usual TV production would be. It shares a lot in common with Sherlock, though it clearly retains an identity of its own. 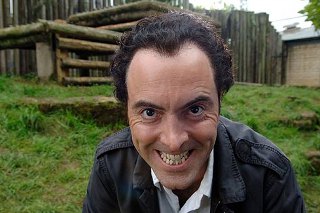 The crucial part of Dr. Jekyll (and his modern incarnation as Dr. Jackman) and Mr. Hyde is played by actor James Nesbitt, who certainly sinks his teeth into the part. He may even delight a little too much in the part, which becomes a bit showy. Of course, it’s quite a juicy character, a man with two distinct and opposite personalities, so there’s not much to complain about there, and again, he does quite a good job keeping up with the production.

As horror, it’s not really gory or scary, per say, but it certainly touches on such sub-genres and establishes a tension all its own. I found the beginning to be a bit on the slow side, but it became more involving as things went on, and there were certainly of twists and turns ans the series progressed, each episode ending on a minor cliffhanger, but proceeding anyway. I wouldn’t call this a masterpiece or anything, but I had a fun enough time giving it a gander during the Six Weeks of Halloween…