I think I’ve mentioned this style as a potential next batch after, well, most of my previous beers. Well, I’ve finally pulled the trigger. This one doesn’t come from a kit or even a clone recipe, though I did look at clones for St. Bernardus 8 and Ommegang Abbey Ale (two of my favorite dubbels). The real key resource was Brew Like a Monk, by Stan Hieronymus. Abbey Dubbels are generally dark beers, though that color comes more from dark sugars (usually candi syrup or rocks) than from roasty malts, meaning that these beers usually surprise folks who think they “don’t like dark beers.” The dubbel has Trappist origins, and they generally keep things simple. As such, what I ended up with wasn’t particularly complex from a recipe perspective. I don’t think I’ll be able to replicate Trappist attenuation rates (which reach into the mid or even high 80% range), but I’m better at temperature control than I used to be, so I guess we’ll see what happens. Here’s the recipe:

Again, nothing super complex here. Trappists apparently don’t use quite as much in the way of specialty grains, but the ones I’m using are not uncommon (especially the Special B, which is a key component for a lot of commercial beers). I get the impression that they use more sugar as well, though they’re careful about additions and temperature control, something I have little control over. But for the most part, this seems like a solid, middle of the road recipe. 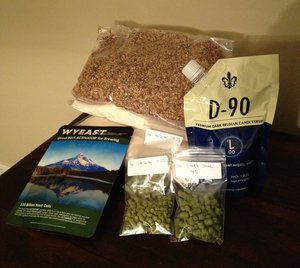 I started by bringing 2 gallons of water to around 150°F – 155°F, then I steeped the specialty grains for about 25-30 minutes. Removed grains, sparged with another gaollon of warm water, bringing the amount in the pot to around 3 gallons. Added all of the malt extract and candi syrup. This is the first time I used candi syrup, and I have to say, it’s much easier to work with than the typical candi “rocks”. After that, I covered and settled in for the boil, which took about 40 minutes (stupid electric stovetop). Once at boiling, I added the bittering hops and started the timer. The Hallertauer hops I got came in at a lower alpha acid percentage than I had planned on, so I had to do a little audible here and add an extra half ounce. Hopefully this will be enough… According to my little calculator thingy, this beer will come out at around 23 IBU, which should be plenty…

With 15 minutes remaining, I add the flavor hops and Irish moss. I had originally planned a full 1 ounce addition of Hallertauer here, but I had repurposed some of that for bittering, and from what I can tell, a lot of recipes eschew flavor hop additions entirely, so this should be fine. With 5 minutes remaining, I hadd the Saaz aroma hops. When finished, I plop the pot in my little ice bath, and wait for the temperature to get down to the 80°-90° range. Strained the wort into the bucket, and topped off with about 2 gallons of cold water (bringing the temperature down to a more appropriate 70° or so).

For the yeast, I went with Wyeast 3787 Trappist High Gravity Yeast (packaged 8/28/12), which is apparently derived from the Westmalle strain (and since they make some of my favorite Trappist beers, I think that’ll work for me). This yeast also has a high attenuation range and is apparently more tolerant of higher temperatures (ideal range 64°-78°). Since it’s fall, temperatures are dropping, but the ambient temperature inside my house is still around 70°-75°, so I wanted to make sure the yeast would tolerate that. I’ve managed to keep the ambient temperature on the lower end of that range for the start, so here’s to hoping things go well.

Original Gravity: 1.079 (around 19°Bx). Yeah, so this came in a little higher than I was going for (which was 1.076), but I don’t think it’s a major cause for concern. The target ABV is now around 7.6% (assuming around 75% attenuation), though that could easily grow to be around 8% if I get more attenuation out of the yeast. My only real concern here is that I have enough bittering hops, though this is a malty style, so I think I should be fine.

I plan to bottle in 3 weeks time (could probably go shorter, but I want to make sure the attenuation maxes out here, and my previous experience with Belgian yeast makes me want to make sure I don’t bottle too early). I’m not sure what will be next in my brewing adventures. I’ve been thinking about some sort of highly hopped imperial red ale, but I’m also considering a big ol’ American Barleywine (perhaps finally getting myself a secondary fermenter and doing some bourbon oak aging). I’m also out of the IPA I made last year, and I’m definitely going to make more of that stuff at some point. And I’m not sure what I want to do about a Christmas beer this year either. Should I replicate last year’s recipe (which was perfect)? Or try something new? So many beers, so little time! Stay tuned.