It has been far too long since I’ve joined in on the Final Girl Film Club, so I’m rectifying that situation with this month’s pick: The Initiation. It’s not quite the cheesefest of some slashers, but on the other hand, it actually acquits itself reasonably well. Definitely a second tier effort, but well worth watching for fans of the sub-genre.

Things get kicked off, as they often do in slashers, with a tragedy in the past. A young girl awakes in a room filled with decapitated dolls (this is brought up again later in the movie, though never really explained). She hears strange noises, so she goes to investigate. As she approaches her parents’ room, she glimpses them knocking boots in the mirror. Naturally, she takes this opportunity to stab her father in the leg… at which point, some strange man bursts into the room. The father grabs a bottle of liquor and attacks, but he only succeeds in dousing the man in alcohol. Stunned, he falls backwards into the roaring fireplace, whereupon he immediately bursts into flames. All pretty standard slasher tragic history stuff here, but then the twist: It’s all a dream! (This sort of cliched “twist” is a recurring theme in the movie.)

It appears that this is a recurring nightmare for Kelly, a college freshman played by Daphne Zuniga. She’s probably most famous for her work in Melrose Place, but to me, she will always be Princess Vespa. Here, she’s pledging a (not at all creepy) sorority, and the head of the sorority informs her (and her sisters) of the typical 80s college movie prank they must carry out: they’re to break into Kelly’s family’s mall and steal the security guard’s uniform. Delightful. 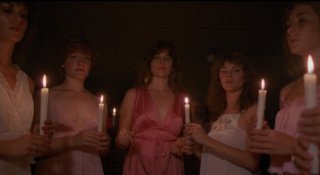 But don’t get your hopes up yet, because it’ll be another hour or so before we get there. Instead, we take a detour to a sanitarium (never seen that in a slasher before, eh?) where we see a Nurse Ratchet wannabe sticking it to the inmates, including a dude with burns all over his face and a penchant for gardening. This in no way foreshadows anything, right? 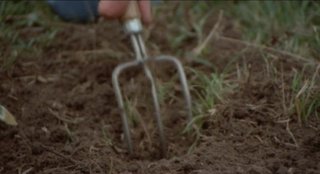 Of course, Ratchet wannabe girl is murdered during a daring sanitarium escape scheme in which numerous crazies have gone missing… including someone Kelly’s parents are afraid of!

Meanwhile, Kelly’s got the hots for her dream analysis professor Peter, who thinks he may be able to help her interpret her recurring nightmares. He takes her to “The Dream Factory”, otherwise known as the basement, whereupon he hooks her up to all this fancy equipment, with the help of his wacky aid, Heidi. We immediately trust Peter because he’s super intelligent, as demonstrated by his repeated references to Freud and Jung. Also: Science! Anywho, we find out a little more about Kelly and her dream as well as a childhood accident where she fell out of a treehouse, slipped into a coma, and then emerged weeks later with amnesia. As Heidi speculates, that ain’t no nightmare man, it’s a memory! Heidi will later perform quite the Scooby sleuthing on Kelly’s past… 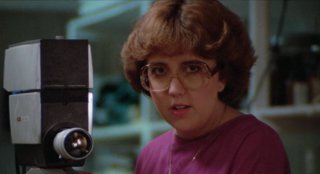 Elsewhere, people are mysteriously dying, courtesy of the aforementioned gardening implements. This relatively short list of victims includes Kelly’s father, who is beheaded on his way to see his mistress. In one of the film’s more brilliant and retrained comedic touches, Kelly’s mother notices that he forgot his glasses, and runs outside, only to find his car driving off (this is presumably the killer covering his tracks), and exclaims “Sometimes I think that man would forget his head if it wasn’t attached!” This, again, is just after he was beheaded. 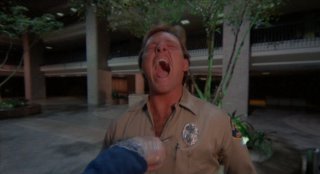 Finally, the girls get to the mall and devise a plan wherein everyone splits up to find the security guard and separate him from his uniform. Naturally, the other sisters in the sorority have contracted out with the frat boys to give the girls a good scare (classic 80s prank twist), and of course, they get picked off one by one in a series of increasingly odd sequences that, nevertheless, never quite reach the levels of insanity or gore you want out of a good slasher. Sure, there’s a basic level of competence here, but there’s nothing here that you haven’t seen before.

It’s ultimately all good fun. There are a series of obvious twists and turns in the final minutes of the movie, again carrying forward the theme of cliched plot devices. This movie really does check off the slasher boxes pretty well. It’s got everything. Past tragedy, suppressed memories, Freud, Jung, sanitariums, burn victims, evil twins, awkward revelations of child abuse, lots of T&A, obscure tools that are nonetheless common weapons in slasher movies (most notably the speargun), bad 80s music, faux-science, the list goes on and on. Pretty much every thing about this movie, every kill, every plot development, every character is derivative of other slashers… and yet, it works. It works pretty damn well, actually.

That is the paradox of slasher movies, I guess. They’re so formulaic and so derivative, and yet, so comforting in their sameness. It’s like horror movie comfort food. Like putting on a warm sweater on a cold winter’s night. As slashers go, I’d put this in the upper portion of the second tier. It’s clearly not top tier stuff, but it gets the job done well, and there’s a lot of nice little touches. This movie essentially represents a really nice appetizer for my upcoming 6 Weeks of Halloween horror movie marathon, which I now cannot wait for…

Some more screens and commentary below the fold, though not a ton, as it’s a pain to take screens off of Netflix’s streaming. 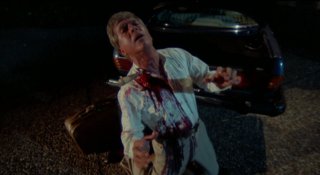 This is Kelly’s father, played by Clu Gulager, who I actually kinda love because he’s in a lot of movies, and his son is the lunatic director from season three of Project Greenlight (the best and most kooky season of that unfortunately long defunct series). 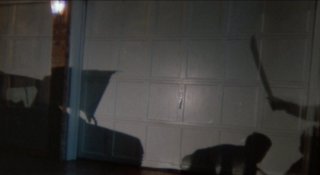 Part 2 of Kelly’s father’s death is a beheading done in shadows! Yet another common slasher trope. 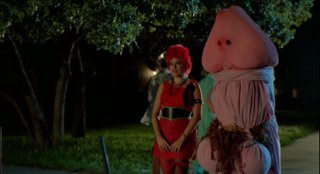 Yep, it’s a penis costume. Not sure what “suppressed desire” this tracks to for this guy, but whatever, I think… this is probably a good place to end this post.