Dennis Cozzalio of the Sergio Leone and the Infield Fly Rule blog has posted another of his famous movie quizes, and as always, I’m excited to provide my answers. Previous installments answering questions from Professor Hubert Farnsworth, David Huxley, Professor Fate, Professor Russell Johnson, Dr. Smith, Professor Peabody, and Professor Severus Snape are also available… But now, here are my answers to

1) Depending on your mood, your favorite or least-loved movie cliché

I seem to have read this question differently than everyone else. I thought it meant we had to give a cliché that, depending on our mood, we liked or didn’t like. Others seem to have taken it as meaning your mood at the time of answering the quiz, pick a favorite or least-loved cliché (which is certainly a lot easier than the first one). Well, my cliché kinda/sorta falls into my original reading: I hate/love fakeout dream sequences. Most often seen in horror films, they can be very effective… but they’re also overused, often even within the same movie. Some abusers of this include Event Horizon and The Descent (and yet, I really enjoy The Descent). The other thing that often bothers me about movie dreams is that they’re so weird. I mean, that’s sorta the appeal of dreams in the first place, but dreams in movies often just play out as special effects extravaganzas. And like most special effects, they need to be used to enhance the story. The trick is that the dream sequence needs to have some sort of purpose beyond the ability to mortally threaten the protagonist without actually mortally threatening them, or some other silly shock… Unless it’s a Nightmare on Elm Street movie, in which case, all bets are off. Or, I suppose, the dream sequence in A Serious Man. So yeah, dream sequences. Sometimes I love them, sometimes I hate them.

2) Regardless of whether or not you eventually caught up with it, which film classic have you lied about seeing in the past?

I’m honestly having trouble coming up with one, which bothers me because I’m sure it’s something I’ve done before…

Who? If there was ever a time for me to lie about having seen films, it would be these quizes!

I can’t say as though I’ve seen any of his movies, though I’m sure I’m quite familiar with his work on Looney Tunes (he seems to be a big Porky Pig director)…

5) Clockwork Orange– yes or no?

Yes, but probably only because Kubrick earned his bullshit with other efforts. It’s a good movie, though it is quite unpleasant to watch.

What an amazingly strange question! There really can’t be that many qualifying films here, but I’ll go with Sleepaway Camp and it’s shocker ending. (One of the other commenters answers Psycho, but I’m not sure that really counts as dysphoria).

I’m not terribly familiar with her filmography, but I’m going with Melanie Laurent, based solely on her performance in Inglourious Basterds. Blake Lively is a fine young actress, but it’s hard to compete with a film like that…

According to my records, I’ve seen 15 movies thus far this year, and my favorite three are Rubber, Hanna, and I Saw the Devil (if I have to pick one, it would be Rubber) 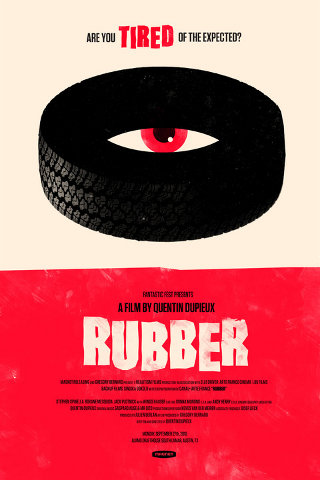 Do scars count as a deformity? If so, the first that come to mind are Harrison Ford’s scar on his chin and Tina Fey’s left cheek scar. I don’t think it matters in either case though.

Why isn’t pompous ass an option? Or all of the above?

I’m not overly familiar with either of them, but I’ll go with Carey for his work with Kubrick on The Killing and Paths of Glory. Also, he was apparently on Airwolf.

This is an extremely difficult question. Writers are rather low on the totem pole in Hollywood, so it’s difficult for most screenwriters to gain any lasting momentum after their initial break. And usually, critics are pretty receptive to those first big success films. Two people came to mind for this: Christopher McQuarrie (of The Usual Suspects fame) and Andrew Kevin Walker (of Se7en fame). Both have relatively small filmographies, but only because much of their work goes uncredited in films.

13) Movie most recently viewed theatrically, and on DVD, Blu-ray or streaming

Theatrically, it was X-Men: First Class, and entertaining and fun superhero movie that actually seems pretty forgetable. On DVD, it was Bring Me the Head of Alfredo Garcia, an unpleasant but very well crafted Peckinpah wester set in modern times. On Blu-ray, it was The Tourist (and hey, it’s got a script by Christopher McQuarrie), which I enjoyed a lot more than I was expecting (though I can see why critics were baffled by it). On streaming, it was Transcendent Man, a documentary about Singularity proponent Ray Kurzweil (very interesting and well worth a watch).

The first that came to mind was Orson Welles’s Harry Lime, from The Third Man. Menace with a grin. 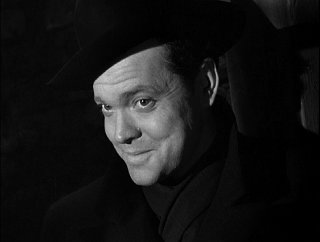 The immediacy of deciding what to watch and then being able to watch it moments later. The biggest problem, of course, is that the selection isn’t particularly great just yet. But someday hopefully soon, it will be…

Once again, I’m pretty unfamiliar with both of these, though France Nuyen was in one of those Planet of the Apes sequels!

I hate to go with the obvious answer, but clearly Paths of Glory is the winner here.

A difficult question because while the movies that keep coming to mind have memorable cars or car chases in them, they aren’t really about cars. Some that I eventually thought of: Mad Max/The Road Warrior and Death Proof. And there are, of course, tons of popular choices that I’ve never seen…

I got nothing, though Marie Windsor seems to have been in a couple movies that I’ve actually seen, so I guess she wins by default.

That’s a tough one, if only because of just how many Stephen King adaptations there are. I’m not actually a huge fan of King, but I did really enjoy The Stand… and that TV mini-series was kinda lame (especially once you got past the first episode). I think IT, Salem’s Lot, and Christine could probably use some updating, though each of those movies/mini-series has its pluses (though the recent Salem’s Lot kinda sucked).

Does Johnny To count as low-profile? I mean, he’s probably the most exciting action director working in Hong Kong today, but he still seems to be overshadowed by the likes of Tsui Hark, Ringo Lam, and John Woo. If he doesn’t work, I also thought of Ti West (The House of the Devil) and Nacho Vigalondo (Timecrimes), both of whom are young, but who have shown a lot of promise.

22) What actor that you previously enjoyed has become distracting or a self-parody? (Adam Ross)

I have to admit that I find Robert De Niro distracting in most movies these days. It doesn’t help that the movies he chooses seem to be pretty bad these days (though I suppose I do enjoy a few of them).

23) Best place in the world to see a movie

I wish I had a better answer to this, but I can’t really think of anything. There are a number of components here, but for me it would be a combination of technical matters (i.e. nice seats, unobstructed view, good video and audio quality, etc…) and a good crowd to watch movies with (i.e. a crowd of film lovers who won’t interrupt during the movie, etc…) If there are theaters that consistently display these attributes, then I’d be all for them. There’s not much around here that qualifies though. Perhaps, someday, an Alamo Drafthouse will show up!

No contest: Sterling Hayden. The Godfather, The Killing, The Asphalt Jungle, Dr Strangelove, and many more make him hard to beat here.

I have, sadly, not seen any Ozu films. Perhaps I should pretend to have seen some and say Floating Weeds. Or something.

The obvious answer is Jack Torrance, played by Jack Nicholson in The Shining, but since there’s already been too much Kubrick talk in this quiz, I’ll go for a less obvious answer: Bill Paxton’s character from Frailty. 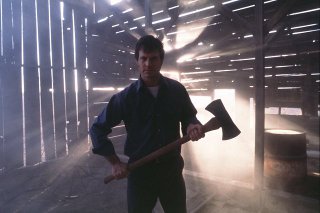 Not being particularly familiar with Sensurround, it seems like a surround-sound type of audio system which would benefit a lot of horror movies, though no specific movies are coming to mind.

I’ll go with Chris Evans here, as I think he’s taken some more chances, though I think both of the actors are pretty decent.

29) Favorite relatively unknown supporting player, from either or both the classic and the modern era

An interesting subject. There are a lot of “character actors” or “that guys” (or “that gals”) out there – Filmspotting even did a top 5 on this subject just a few weeks ago, and it’s hard to beat that list. However, the one that came to mind (that isn’t on Filmspotting’s list) was William Fichtner. A quintessential “that guy” in my opinion.

30) Real-life movie location you most recently visited or saw

30th Street Station in Philadelphia, most recently seen in Blow Out.

Another mulligan needed here, as I don’t think I’ve ever actually seen any of his movies…

Julie Adams, because her name sounds familiar, not because I know what I’m talking about.

Yet another mulligan on this one. Not a genre I’m particularly well versed in…

34) What’s the biggest “gimmick” that’s drawn you out to see a movie? (Sal Gomez)

I suppose 3D would qualify, though that ship has pretty much sailed. I now try to watch the 2D version if at all possible.

35) Favorite actress of the silent era

This would imply that I know enough of the silent era to answer, which I don’t.

I suppose that would be as Friar Tuck in The Adventures of Robin Hood, though once again, I have to note that I’m not terribly familiar with the man’s filmography.

Let’s see, for the best remakes, I’ll say Ocean’s Eleven and The Departed are worthy remakes (I’d include True Grit, but I haven’t seen the original). The worst remakes category is a little harder, as I generally try to avoid bad movies! Nevertheless, I’ve seen some of the Platinum Dunes horror movie remakes, and most of them are pretty terrible.

38) What could multiplex owners do right now to improve the theatrical viewing experience for moviegoers? What could moviegoers do?

And that just about covers it.