One of the films I forgot to include in my Greatest Movies I’ve Never Seen list was Sunrise: A Song of Two Humans. It’s a 1927 silent film and it features a number of iconic shots – most notably a scene where a woman and man pass through a bustling street (see this clip, about 3:36 in). One of the things I always find interesting about the silent film era is how much of modern cinema is represented, even back then. While technology and budgets have certainly improved, much of the visual language of cinema was coined during the silent era. In particular, Sunrise has a number of impressive tracking shots and the composite special effects are much more effective than expected.

The shot that struck me the most, though, was this one: 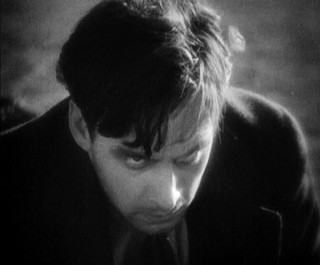 In the film, a city girl vacations in the country and tempts a farm man into an affair. She suggests he drown his wife so that he could be free to run away to the city. It’s a rather simple premise, but the man is conflicted, and when he takes his wife out for a boat ride, he stops and favors her with the above stare. Does it look familiar?

Maybe it’s just me, but it bears a striking resemblance to what’s called the Kubrick Stare. Head tilted downward, eyes tilted upward. It was a favorite shot of Kubrick, and he often employed it in his movies, perhaps most famously in the opening shot of A Clockwork Orange: 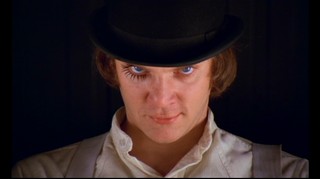 It turns out that the phrase “Kubrick Stare” was coined by cinematographer Doug Milsome, a frequent collaborator with Kubrick. It seems that Kubrick liked to use the look himself when he was feeling angry or mischievous, and it’s rumored that his stare was more intense than anything in his films. This shot from a Playboy interview in 1969 captures it reasonably well: 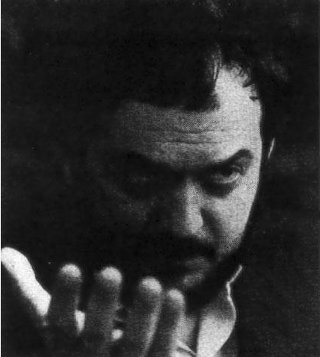 Again, Kubrick is famous for using this shot, and you can see it in most of his films, often multiple times (see the extended entry for more shots from The Shining and Full Metal Jacket) and being a big Kubrick fan, I was kinda surprised to see it, full formed, in Sunrise.

Of course, neither Murnau or Kubrick have trademarked that stare. In fact, it’s a rather common human expression (indeed, my nieces frequently make that face whenever their crazy uncle Marky does something silly). Filmmakers of the stature of Kubrick or Murnau just managed to capture well enough that it stands out. Kubrick’s consistent use of that image made it iconic enough that he sorta made it his own. Now, whenever someone uses a shot like that, it’s considered an homage to Kubrick… but watching Sunrise is interesting in that light (seeing as though that film was made a solid 30 years before Kubrick even started making movies). More screenshots below the fold…

Jack Nicholson flashes the expression numerous times throughout The Shining: 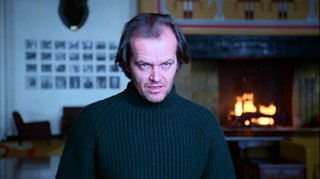 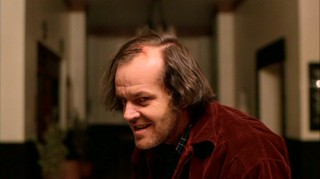 Vincent D’Onofrio seems to be using the Kubrick Stare by way of the Thousand Yard Stare (or vice versa?) in Full Metal Jacket: 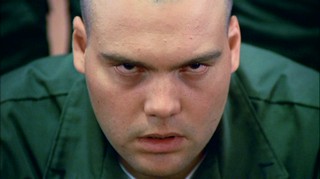 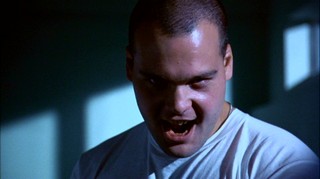 There are lots of other examples I could use, but I’ll leave it at that for now…

2 thoughts on “The Murnau Stare”