I finished off the first season of Magical Girl Lyrical Nanoha last weekend and moved on to the first disc of the second season, Magical Girl Lyrical Nanoha A’s. As I mentioned in my previous post on the subject, the first season was slow going at first, and I had some major problems with a few things, notably the age of the characters combined with the fan service (apparently the specific term for this is “Lolicon”, something I’d like to avoid from here on out). But behind all that stuff was a pretty good story, and I suppose I’m glad I stuck it out. I’ll try to avoid major spoilers, but there are some things I want to talk about that require them, so there.

I’ve already gone over the basic plot of the series:

The story concerns a young girl named Nanoha whose life is changed when she runs across a magical ferret who gives her a stone called the “Raging Heart” (there seems to be some confusion in translations here, it sometimes being referred to as “Raising Heart” – I gather there’s some sort of story there, but I don’t want to read too much about it until I finish the series). The stone unlocks Nanoha’s magical powers and she decides to help the magical ferret recover powerful but unstable Jewel Seeds (magical artifacts from another dimension). Soon it becomes apparent that they’re not the only ones after the Jewel Seeds, and Nanoha gets caught up in the middle.

It turns out that the relationship between Nanoha and the other girl who is going after the Jewel Seeds (named Fate) is an important part of the series. It’s pretty clear that Nanoha and Fate are only superficially opposed to one another, and Fate’s mother is the real villain of the series.

This brings up something I did like about the series, which is that first impressions of characters, especially the villains, are often wrong. There are three primary villains in the series. There’s Fate, but she’s only following her mother’s wishes and eventually you grow to like her. Aruf is Fate’s familiar, and she’s especially mean to Nanoha and Yunno. But then we see how well Aruf treats her master and I think she ended up being my favorite character in the series. Finally, there’s Fate’s mother. She is pretty thoroughly evil, but we find out later why she’s doing what she’s doing, and it’s a legitimate motive, even if her methods are detestable. 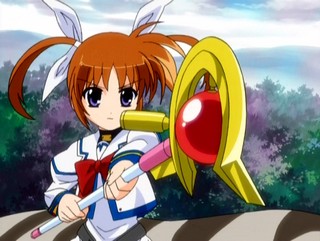 The turning point of the series is when the Space Time Administration shows up. The universe gets fleshed out, and we start to get a better idea of what’s going on. A few additional interesting characters are introduced and the story starts moving quickly. There are some things I found a bit odd though. At one point, the captain of the Space Time Administration ship comes down and talks to Nanoha’s parents, explaining that Nanoha needs to go away for a while and that things might be dangerous… but there’s no explanation of why Nanoha needs to go away. Her parents don’t know about magic or Jewel Seeds or anything… and yet they still agree to it. The fact that no one in Nanoha’s original circle of human family and friends knows about her magical qualities seems a bit odd to me. I keep expecting the other shoe to drop, but it hasn’t happened yet (even 5 episodes into the second series). Everyone has such a cheery attitude about a 9 year old being put into a dangerous situation (and that includes Nanoha, which leads to strange cognitive dissonance for me while she’s in a battle). Like I mentioned in my previous post, this sort of thing makes no sense to me. In an email response to my last post, a reader explained that a lot of other cultures have a recent and celebrated history of children soldiers, which does make a sort of sense. I guess my western sensibilities just aren’t tuned right for this series, because stuff like this keeps tripping me up.

This seems to be a very uneven series from my perspective. There are a lot of little things I don’t like about it, but there are also a lot of little things I do like. Some of the side characters are great (Aruf in particular, though I also have a soft spot for Amy). The sense of technology that drives the magic is actually very well done, and it kept the series from getting to out of hand with powerful magic (in the way that, say, Hellsing did). This is important because it means that there actually are stakes in the series, and that when a battle happens, I don’t always know the outcome. There seems to be a tacit acknowledgement that physics are still important, even if they can be stretched a bit. Visually, the series does have an interesting look. Often, the animation is done to imitate camera styles – for instance, there are scenes which look like they were “filmed” with a handheld camera. It’s not something I noticed much in other series, and it works really well here. Lighting effects are also well done. The music isn’t especially my taste, but I suppose it works well enough.

The ending of the first series is reasonably well done. There are some specific revelations that are surprising, even if the general plot is a bit predictable. Nanoha and Fate become friends in the end, and Nanoha A’s picks up right where we left off. This time, a powerful magical faction has appeared on earth, attempting to use another unstable horcrux artifact called the Book of Darkness. Things haven’t evolved very far just yet, but the pattern of villains with understandable motives seems to be holding up. As previously mentioned, the whole thing still has a vaguely Harry Potterish feel to it, which is unfortunate because I probably enjoyed the Harry Potter books more than this series.

Ultimately, I’m glad I’m watching this series, but I think I’ve discovered a strain of Anime that I know I want to avoid in the future. The whole lolicon business is frustrating, especially since you can go a few episodes without it and just when I’m getting used to a normal story, I get slapped in the face with a creepy transformation deck or something. I don’t really have that much of a problem while watching the show, but I can already tell that this is the sort of series where my opinion will degrade over time because the most memorable part of it is something I find annoying and creepy. Honestly, I struggled even writing this post, but I figured that I started writing about it and it wouldn’t be fair to stop in the middle. Probably one more post when Nanoha A’s ends. Anyway, lots more screenshots and comments in the extended entry. 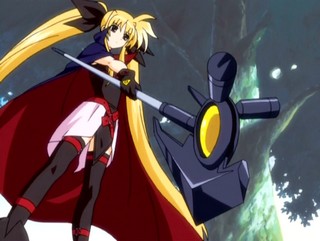 This is Fate and her magical staff, Bardiche. As mentioned before, one of the things the series gets right is the way the magic is driven or at least enabled by technology. Every magician in the series has an artifact like this, and they seem to act like advanced computers. I don’t know that I would call them artificial intelligence, but there’s clearly a relationship between the magician and their artifact. In fact, I think I like this better than the parallel in the Harry Potter universe (which are wands and which are kinda lame). 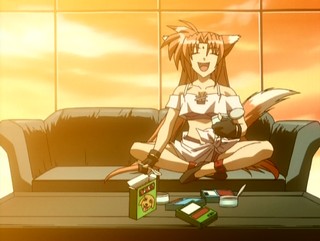 This is Aruf. She’s Fate’s familiar and often takes the form of a large dog/monster thing (I suppose you’d call her Yunno’s counterpart). When she’s in her human form, she still retains some of her doglike features (apparently a common thing in Anime), but in a cute way. As previously mentioned, she comes off as a bit of a brat at first, but you eventually come around when you see how loyal she is to Fate. 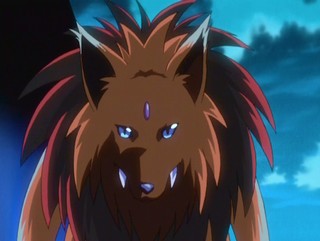 This is Aruf in her doggy form. Not quite as cute, but that was rectified in Nanoha A’s, when she cuts down on her size: 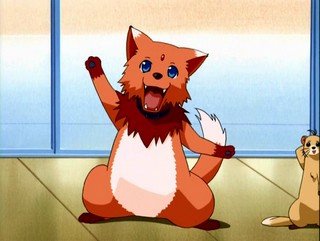 Her new and improved cute-doggy form is certainly cuter, but I’ve yet to see how this plays on the magical battlefield:p 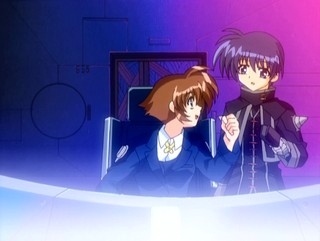 This is Amy and Chrono, who work for the Space Time Administration. One thing I haven’t really gotten into with this series is that there seems to be a quasi-romantic angle going on here. Chrono and Yunno both seem to have a thing for Nanoha, but it’s not especially followed through in the series. Amy and Chrono also seem to be good friends, and sometimes I get the feeling that Amy and Chrono will get together. Or maybe Chrono and Fate will get together. Who knows? 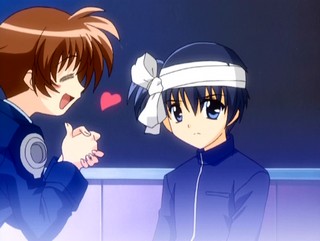 This is the scene that endeared me to Amy forever. After a particularly brutal battle, Chrono has a wound on his head. Fate and Nanoha have wounds as well, but their familiars are taking care of them. Amy dresses Chrono’s wound, but then she ties this fruffy bow on top as a sorta joke. 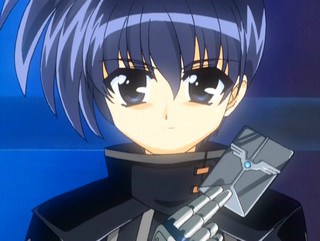 A closer look at Chrono, and his little magic technology thingy. 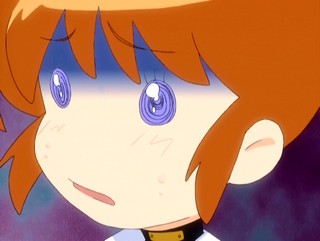 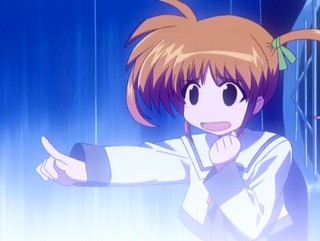 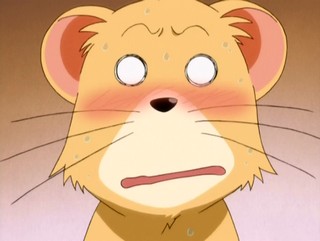 Like Trigun, this series sometimes uses exaggerated visual poses to emphasize surprise or embarrassment. In my last post, I mentioned that “Yunno and I have pretty much the same reaction” to the creepy lolicon stuff, and I meant that I kinda looked like that last screenshot of the ferret. The aforementioned emailer mentioned that someone could take that the wrong way, but I’m glad no one posted anything about that because I’m pretty emphatically not enjoying that sort of thing. 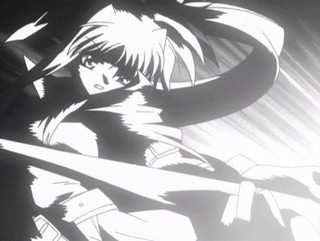 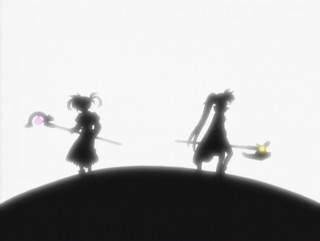 Here are a couple of interesting visuals from the series. As previously mentioned, the series does a pretty good job with this sort of thing. 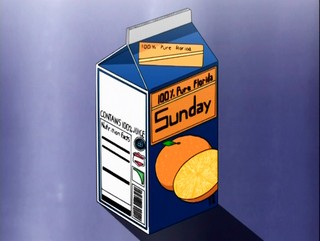 I’m always amused by English labels on stuff in Anime. In this case, we’ve got a half-gallon of Orange Juice, but it’s labeled as 100% Pure Florida… Sunday? The box also mentions that it contains 100% juice, but I’m still not sure what they mean by “Sunday”. It’s also interesting that they chose to make it Florida OJ though. Is it common to have Florida OJ in Japan? 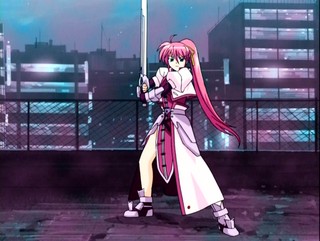 This is one of the villains with a heart of gold that shows up in Nanoha A’s. 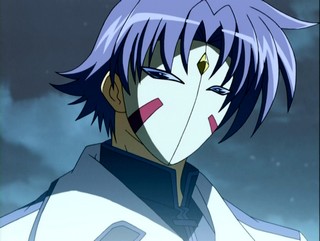 This mysterious guy has only just appeared in the series. His role is unclear, but he seems to be a villain as well. I do believe that later in the series, he will end up turning on the group of magicians he’s helping out now. 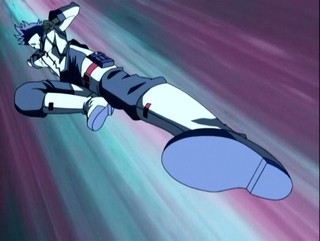 One of the things that strikes me about this series is that it features many of the stereotypes of Anime. Stuff like power beams and someone jumping through the air with colors flashing in the background, etc… 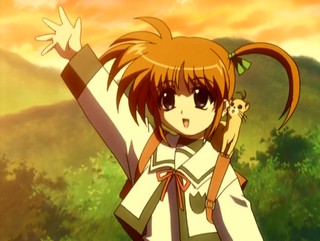 And that about wraps up this post. Probably one more post in a few weeks when I finish off the series.