In my first post on Noir, I kinda made light of the body count that our two heroes were racking up as well as the fact that French society never seemed to notice when a few dozen nameless hitmen are discovered in a park or abandoned building somewhere. I was making a joke of it, but it always sorta bothered me. There are a few hundred people who die during the course of this series. While they’re all portrayed as mostly nameless, faceless victims, I couldn’t help but wonder what the consequences of their deaths were. Were they married? Did they have kids? Friends? And so on. Warning: The rest of the post contains major spoilers!

One of the things I wondered about was how well Mireille and Kirika were able to deal with the amount of death and destruction they were doling out. For the most part, they seem to deal with it remarkably well. Kirika seems to be more affected by it than Mireille. As the series goes on, she seems less and less enthused with what she’s capable of doing…. but there’s something off about her reaction that took me a while to place. I finally realized what it was – it reminded me of Crime and Punishment (I suppose I should note spoilers for that novel as well), in particular, this paragraph (page 623 in my edition) where Raskolnikov laments his punishment:

… even if fate had sent him no more than remorse – burning remorse that destroyed the heart, driving away sleep, the kind of remorse to escape those fearsome torments the mind clutches at the noose and the well, oh, how glad he would have been! Torment and tears – after all, that is life, too. But he felt no remorse for his crime.

In essense, Raskolnikov felt no guilt or remorse for his crime, but that lack of feeling, that lack of guilt was just as horrible as he could have imagined. That’s very much how I thought Kirika felt during the second half of the series. In his take on the series, Steven Den Beste does an excellent job describing the duality of Kirika:

Kirika had two parts inside. One part was a killing machine. It was created by Altena through training and indoctrination, and once it seemed ready, Kirika’s memory was wiped and she was placed in Japan, so that she could begin to face the Trials which were required of all candidates for Noir to prove their fitness. Events after that point were not planned, because they depended on what Kirika herself did, and how she reacted to the process. Hints were left which might lead Kirika to Mireille, but if they had not, she would have faced her trials alone.

The other side of Kirika was a lonely girl, who wanted nothing more than a normal life, a name, a home, and someone to love and be loved by. The series shows us those two sides of Kirika, gradually building them up to tangible presences, and in episode #25 Kirika is forced to choose one over the other.

The killing machine part of Kirika’s personality was capable of evil, without remorse or guilt, but the human side of her personality recognized how horrible that was and the series is essentially about Kirika’s internal struggle. Mireille seemed to be much more neutral. The other piece of the puzzle is Chloe, who seems to take a perverse pleasure in what she is capable of, and as the series progresses, she becomes more and more creepy. 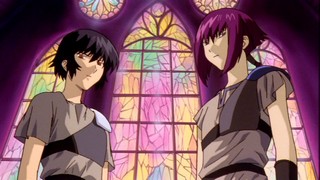 Ultimately, when Kirika is forced to choose between Mireille and Chloe, she chooses Mireille (who I guess is supposed to represent the human side of Kirika’s personality). As Steven notes, the series does not end there and neither does Kirika’s internal struggle. She is still capable of horrible evil and is not sure she could live with herself. Altena still attempts to appeal to killing machine portion of Kirika’s personality, but she ultimately fails, and Mireille succeeds in saving Kirika. At the very end, it’s clear that Kirika and Mireille will continue on together and that they love each other (like sisters). I am once again reminded of Dostoyevsky (page 630 in my edition – replace the male pronouns with female pronouns and this could easily apply to Kirika):

… at this point a new story begins, the story of a man’s gradual renewal, his gradual rebirth, his gradual transition from eone world to another, of his growing acquaintance with a new, hitherto completely unknown reality. This might constitute the theme of a new narrative – our present narrative is, however, at an end.

There’s a lot more to the ending of the series that I’m skipping over, but Steven’s post covers that in plenty of detail and I don’t see a need to repeat all that… It’s not a perfect series, but the ending did make it worthwhile for me. I wouldn’t say that I was as taken with it as Steven or Alex, but neither was I as disappointed with it as Ben. I thought the series was a bit too long (a little too much filler, perhaps) and unevenly paced, but the ending made up for any issues I may have had with the series.

As usual, more screenshots and commentary in the extended entry… 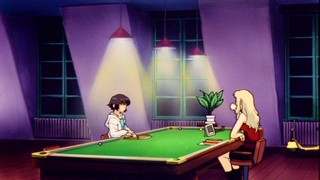 I didn’t notice this at first, but the table that Mireille uses to do her work is a pool table. Not sure what the significance of that is, but I guess you could make something symbolic out of it, like that Mireille and Kirika are stuck playing the Soldats’ game or something. 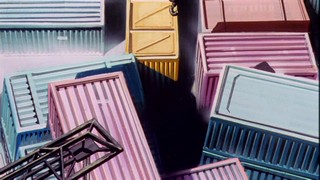 Cargo containers in the least organized port in the world. Seriously, look at those things. 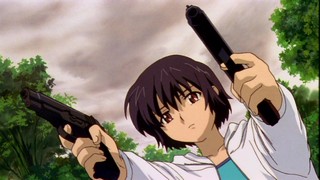 As mentioned above, Kirika, seen here double-fisting some pistols,John Woo style, is the main character of the series. This is interesting because at first glance, the series seems to be primarily about Mireille. As the series progresses, Mireille takes a back seat to Kirika and Chloe, then comes to the foreground at the end. 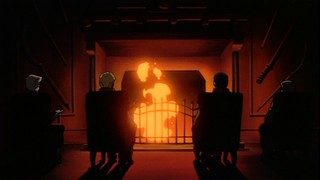 The Soldats in their stereotypical lair, sitting next to a fireplace and sipping port. We find out more about the Soldats later in the series, but their ultimate plan and Altena’s plan for Noir all ends up taking a backseat to Kirika’s internal struggle, which is the true conflict of the series. That’s a good thing too, as giant conspiracies tend to bore me… 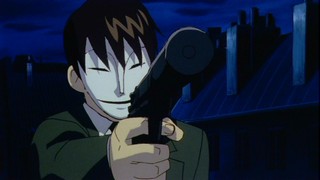 As the series progresses, Kirika, Mireille and Chloe encounter more and more hired killers, and in this case, the killers are literally faceless. Not a single one seems to be able to hold a candle to any of the Noirs though, which makes me wonder how challenging these “trials” are supposed to be for Noir. 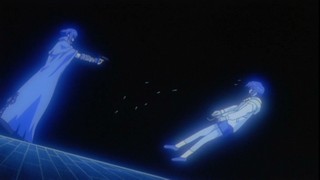 This scene really bothered me. Not so much when it happened as in the next episode when we find out… that it doesn’t really mean anything. It serves a purpose – Mireille begins to realize just how much she cares for Kirika, etc… but it’s a kinda cheapshot. Also, I’m not really sure what happened. Did Chloe actually shoot Kirika? Why is Kirika fine afterwords? I didn’t get it. 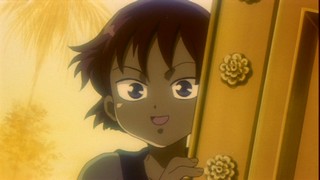 Towards the end of the series, we learn that Kirika killed Mireille’s parents (apparently when Kirika was extremely young). Chloe was also there, and the screenshot above is her after she sees Kirika kill. Kinda creepy. 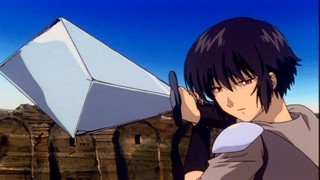 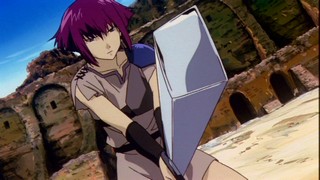 Towards the end of the series, Kirika and Chloe are reuinited at Altena’s home and have an awesome swordfight (as a training exercise). 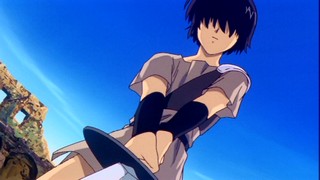 Kirika wins the training session, and in the screenshot above you see something that is a recurring image. Often, when Kirika’s killing machine personality is in control, her hair covers her eyes, making her faceless and symbolizing emotionlessness. I didn’t really notice this until later in the series, so I’m not sure it applies to the whole series, but I did see it multiple times. 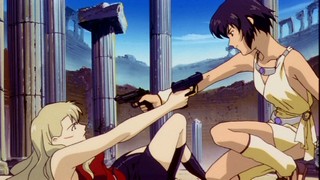 Mireille and Kirika have a faceoff towards the end, and they are legitimately trying to kill one another, but in the end, neither can pull the trigger. 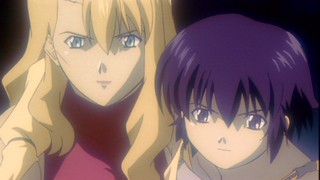 This is the last shot in the series. The saturated, washed out brightness of this type of shot usually symbolizes transcendence or resolution, and that certainly fits with the ending of the series.

Well, that about covers it. Next up in the Anime queue is Miyazaki’s Ponyo, which I should be seeing sometime this week. It’s actually getting a pretty wide release – it’s even playing at the local multiplex…