This month’s pick for the Final Girl Film Club is an Italian zombie flick called Burial Ground: The Nights of Terror (aka Zombie 3). Those Italians sure do love their zombies, but I have to admit that it’s a subgenre I’ve never really gotten into… Unfortunately, this film does little to change my mind. It’s pretty much your standard zombie fare – a group of people gather at some Professor’s mansion in the country (not sure how a professor could afford such a swanky place to live, but hey, it’s a zombie movie, why get bogged down in details), only to find that the professor has accidentally awoken the dead, who proceed to shuffle slowly towards our heroes in the typical zombie fashion. This being a bad horror movie, many characters go wandering off on their own so that they can succumb to the undead masses. I suppose I should mention that there are some minor spoilers in the below, but that really doesn’t matter that much in a movie like this, does it? 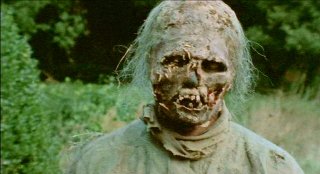 The movie is pretty craptacular, but the filmmakers also knew where their bread was buttered and hit the zombie movie sweet spots well enough. Instead of spending what little money they had on things like actors and story, they appear to have blown everything on their special effects and makeup, to reasonably good effect. Aside from similar clothing, these zombies don’t all look the same or have the same makup – each one has a somewhat distinct look, varying in stages of decomposition. Being a zombie flick, there is no personality to any of them, only to the mob. There’s some pretty effective gore here, but by the third or fourth time you see a group of zombies squishing around some unlucky character’s entrails, it gets to be a bit boring. The acting is horrible, of course, and we never really get to know most of the characters, but we do get to know the female characters’ bodies pretty well (not good actresses, but they look pretty good onscreen).

Again, pretty standard fare for a zombie flick. At first, I was a little confused at how this movie had achieved such a high cult-film status. Then this little fella struts onscreen: 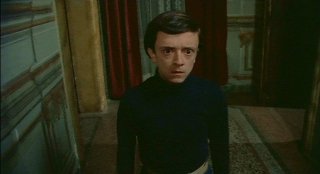 The character of “young” Michael is best thing in the movie, and he is definitely why this movie has attained cult status. You see, the character is supposed to be a 12 year old boy with a serious Oedipal complex. Apparently, Italian law prohibited actual children from being in schlock-fests like this, so the filmmakers had to try and find an adult who looked like a child. Somehow, they settled on 26 year old Peter Bark, who is quite small, but looks a lot older than 26 (let alone 12). Strangely, even the voice actor they got to do the dubbing on the English version sounds like a grown man imitating a child. Anyway, this character steals the show. He’s actually not onscreen for a good portion of the movie, but when he is, he’s awesome. And the climactic payoff of his bizarre Oedipal complex is indeed disgusting and depraved and surely the reason this film has any following at all today. I suppose a groan-inducing “I can’t believe they went there” ending is better than many zombie movies manage, but still…

Aside from the unintentional comedy such a film offers, it didn’t really do much for me. Zombie fanatics will surely love the experience, but I left the film with a resounding “meh.” The whole Oedipal subplot certainly sets this movie apart from the shuffling mob of other zombie movies, but I don’t find that particularly impressive either… Some nice gore, nudity, and unintentional comedy, but otherwise nothing special. **

Lots more screenshots and comments in the extended entry… 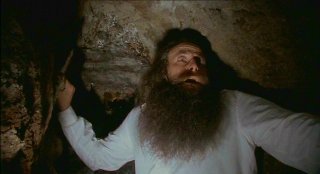 This is the aforementioned professor who invites the group of people to his swanky mansion just before heading over to the burial ground (how convenient that this professor is living in a mansion that is a quick walk away from some gigantic tomb). Here, he is reeling back in shock at seeing a zombie. Strangly, he also drops the little pickaxe, leaving himself defenseless (of course, he’s also the one who tries to reason with the zombies, explaining that “I’m your friend!” right before he gets eaten). 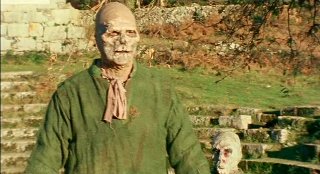 Here’s another of the film’s zombies that showcases the standard green-mumu and neckerchief uniform of the zombies (the neckerchief was presumably used to hide the edges of the zombie masks, which I admit are pretty cool). 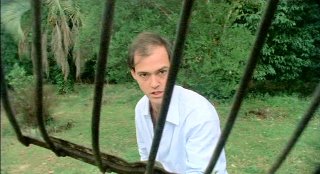 One would think that the pitcfork would make a reasonable weapon against the undead, but not the way this guy wields it. I don’t think he even gets to use it… the first zombie that (slowly) approaches him manages to (slowly) grab the end of it and (slowly) wrest it from him. Perhaps the zombies posess super strength. 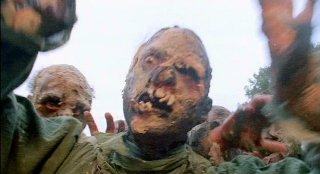 There are only ever about 5-10 zombies onscreen at any given time, but the film does give a pretty good implication that there are tons of zombies with shots like this, where you only see a few zombies, but you get the impression of a giant zombie horde… 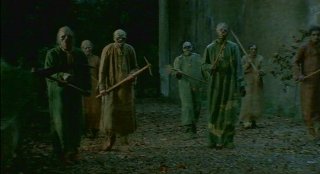 One of the other strange things about the zombies in this movie are that they have enough intelligence to use rudimentary tools and set traps for our unwitting protagonists. And they can apparently throw giant spikes with remarkable accuracy, pinning victims to a wall so that they can (slowly) use a scythe to cut off their head. 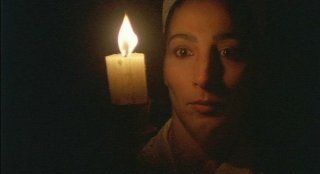 One of the many times a character wanders off on their own so that they can become victims. It’s actually a nice shot. 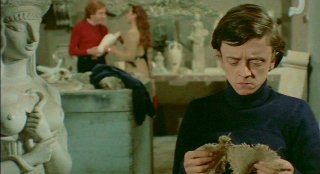 This is one of my favorite Michael moments. He’s exporing the basement with his mother and her friend (boyfriend? Not really sure what the deal is with Michael’s father – perhaps he was conceived by midi-chlorians) when Michael finds this patch on the floor and sniffs it. Then he runs over and says “Mother… This cloth

smells of death.” and his mother just laughs it off, completely ignoring the creepy factor (which is only enhanced by the already creepy look of Michael). Unintentionally hilarious. 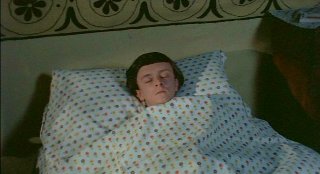 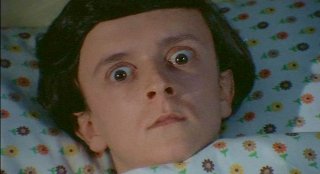 These shots are actually our first introduction to Michael. His mother opens the door to check on him and he is sound asleep. Then the camera zooms in on his disembodied head as he opens his eyes wide. 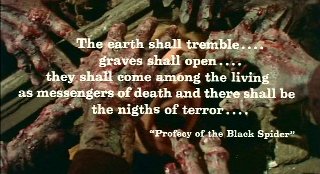 This is actually the closing screen of the film. Things are looking pretty bleak for the final surviving character when suddenly there’s a freeze frame and these words appear on the screen. I have no idea what the hell this Black Spider is, or why it’s making a “Profecy” or why it can’t spell trivial words like “Prophecy” or “nights”. Is this supposed to mean something to the audience? Or is it supposed to be lending a sorta faux-creepy credibility to the proceedings (er, preceedings?) Either way, it certainly contributes to the film’s unintentional humor quotient, so I actually kinda liked it.

Well, there you have it! Near as I can tell, this isn’t really at the top of the Italian Zombie sub-subgenre, but I guess it kept my interest long enough… For once, I’m actually ahead of the game and posted this several weeks early – but there will be lots more posted at Stacy’s site in early July.

2 thoughts on “Burial Ground: The Nights of Terror”