So I finally finished Trigun this week. Ultimately, I wasn’t very impressed with the series and I would probably rank it near the bottom of what I’ve seen. Most of my initial thoughts of the series still hold, with some minor shifts in focus.

The series does go for a couple of plot twists, but I found myself somewhat unmoved at most of them. This is probably because the series never really drew me in and thus I never really made a great connection to some of the characters. For instance, there is an unexpected death somewhere in the last few episodes. The death itself didn’t really bother me, but I was somewhat moved by Milly’s grief (surprisingly, Milly seems to have more of an arc in the series than Meryl, who doesn’t get much in the way of closure).

The ending makes a certain thematic sense, but I found the execution be somewhat dull and anticlimactic. It was pretty obvious what was going to happen – it’s not like the theme hadn’t already been established over and over again throughout the series. I suppose there is an element of ambiguity in the ending, but I have to say that I’m not particularly interested in exploring various interpretations.

So this is the first series I’ve watched and pretty thoroughly disliked. It had its moments, and for a good portion of the series, it was watcheable, but something didn’t really jive with me. In the comments to my last post, I said:

I have a hard time articulating what it is that I don’t like about this series. Everything I come up with seems like a nitpick or a rationalization. Nitpicking is almost always symptomatic of a deeper distaste for something, I just haven’t really figured out what that is. It might be the tonal schizophrenia, but then, I don’t mind huge shifts in tone in other things. Indeed, watching a movie like From Dusk Till Dawn, the best thing about it is the tonal shift (IMHBCO). Perhaps I can like FDTD because it’s only one big shift, and the two tones are similar in structure, if not in content. Maybe it’s the combination of things. Tonal schitzophrenia, steampunk, wacky animation, and a story with too much filler. None of these things inherently bothers me by itself, but combine them and I’m not doing so well.

I’ve got no new insights as to why the series didn’t click, it just didn’t. In any case, I’ve got several other series in the queue. I think Noir or Samurai 7 (I’m leaning towards this because it’s on Blu-Ray, and is thus only 3 discs) will be next.

As usual, more screenshots and comments (and perhaps some major spoilers as well) after the jump… 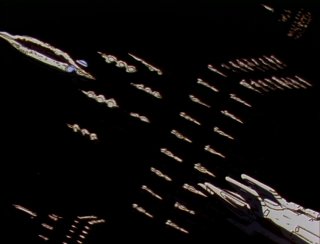 The sixth disc started with an episode that had this image of a fleet of starships. I momentarily thought that I screwed up my Netflix queue, putting Banner of the Stars II ahead of Trigun, but it turns out that this image begins a lengthy flashback that describes Vash’s past and how the planet was colonized. I was a little disappointed that I wasn’t watching Banner II, which just goes to show that I didn’t like Trigun much. 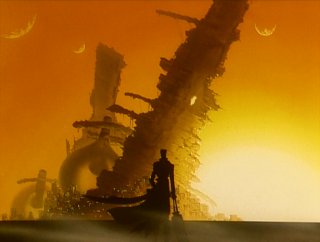 I just really like this visual, though it’s indicative of what I don’t like about the series’ overuse of panning on still shots. 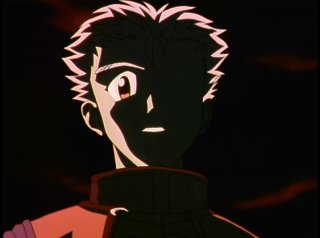 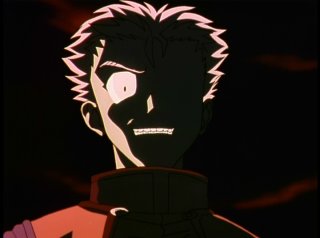 On the other hand, this series of two shots shows how effectively human emotion is communicated through a couple of simple (ok, exaggerated) changes to facial expressions. Still, the continual use of cheap animation techniques was somewhat grating to me. 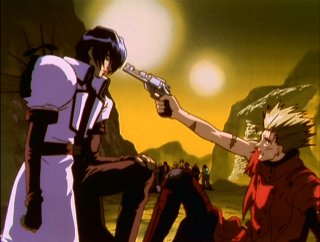 I loved this shot of Legato’s final showdown with Vash. Major spoilers! In the showdown, Legato’s real purpose is not to physically defeat Vash. Rather, Legato seeks to force Vash to break one of his own rules. Vash has sworn to never take a life, so Legato set up this situation in which the only way for Vash to survive would be to shoot Legato. The reason the shot is brilliant is that Legato is higher in the frame, towering over Vash. This position is usually a sign of strength, and thematically, Legato does indeed have the upper hand in this situation, despite the fact that he is unarmed and Vash is pointing a gun at his head. I found this bit of visual dissonance rather clever, but unfortunately, the next couple of shots ruin it by having Vash stand up and showing Vash from a low “camera” angle (which visually ephasises Vash’s power, despite the fact that Vash is actually succumbing to weakness). 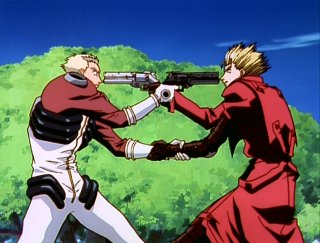 Unfortunately, Vash’s showdown with Knives is not as visually interesting and is indeed anticlimatic. The battle takes maybe 5-10 minutes of screen time, but I was distinctly reminded of the pointless fight sequences in the Matrix sequels. 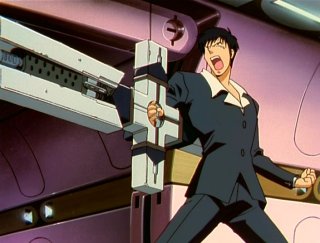 At some point during the last 10 episodes, you see the full power of the cross that Wolfwood carries around. I’m not positive, but I’m pretty sure they only animated this one pose of Wolfwood holding his weapon, and then changed the backgrounds on at least 2 or three separate episodes. 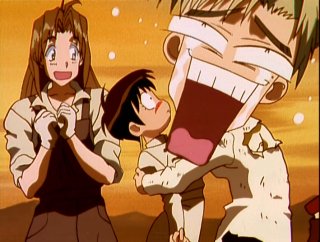 Though it is curtailed in the last 10 episodes, the absurdly stylized art is still present. 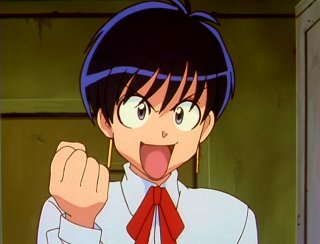 And I shall leave you with one more pic of Meryl, because, well, because I want to. It’s a good pic, right?

That does it for Trigun. Again, not positive what Anime I’ll be watching next, but it’ll probably be Noir or Samurai 7.