Since finishing Hellsing, I’ve been working my way through Trigun. In short, the series has grown on me, though there are some things that just aren’t clicking for me. I expected the series to be much different than it really is, which kinda put me off at first.

The series follows a character named Vash the Stampede (aka The Humanoid Typhoon) as he wanders across a desolate planet. Towns he visits have a nasty habit of sustaining massive amounts of damage, and he has a $$60,000,000,000 bounty on his head (the currency is referred to as “double dollars”). So Vash is constantly being chased by a plethora of bounty hunters and unsavory types. He’s also being tracked by two insurance agents named Milly and Meryl, whose goal seems to be to simply discourage him from destroying towns, as the Bernardelli Insurance Company is apparently taking a bath on property supposedly damaged by Vash. Naturally, much of what is known about Vash is an exaggeration, so at first, they don’t believe Vash is who he claims. As time goes on, it becomes clear that Vash is who he says he is, and that he has a dark past that he can’t remember. 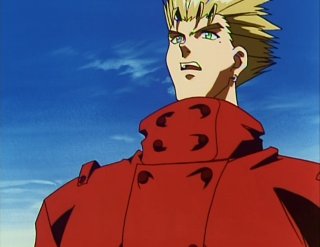 Vash is an interesting main character. At first, he seems like a bumbling idiot, and a naive one at that. He has a silly sort of demeanor and seems to be constantly down on his luck. As the series progresses, you see that he’s not as hopeless as he seems. He’s constantly being thrust into tricky situations, and he always seems to be able to handle the situation perfectly despite still mostly appearing like a clumsy moron. And despite all the damage that happens to towns, it’s usually not caused much by his actions (the bounty hunters who chase him seem to be the worst offenders)… and he never kills anyone either. He’s a very likeable character. A lovable buffoon.

This is helped along by the character design, which looks like your typical Anime art mixed with absurdly stylized exclamations. Honestly, I found this a bit disconcerting. The tone of the series is all over the place. Sometimes it’s a silly, practically slapstick comedy, other times, it’s stoic and deadly serious, and it can switch modes at the drop of a hat.

The setting is reminiscent of a western, but with a distinct steampunk flair, and that’s another thing that I’m not particularly in love with. Steampunk is one of those conventions that can look really cool, but which always make me ask nitpicky questions. For instance, every town on this planet seems to have a giant lightbulb hanging over it. We learn later that it’s some sort of generator, but still, why would you design your generators like that? It’s stupid and not important to the story, but I find myself nitpicking all sorts of stuff like this while watching the show. This usually happens to me when a show or movie isn’t clicking with me.

The experience of watching this show has been odd. I watched the first disc and seriously considered quiting the series right then… but Netflix had already shipped the next disc, so I watched it, and I found the series growing on me. And this seemed to be continually happening. Every disc I’d get, I’d start off not particularly enjoying it, but by the end of the disc, I’d be sucked in. So I’ll probably finish the series, even though it’s not especially my bag. 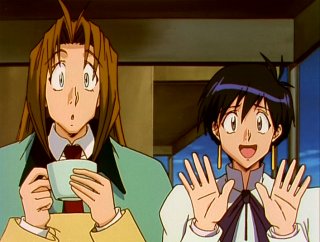 The story is relatively simplistic, and there seems to be a lot of filler in the series. Every episode or two is a new town with a new challenger, whether it be a bounty hunter or one of the main villain’s henchmen. Perhaps it’s just my recent bout of video game madness, but the series seems structured like a video game – it’s like every episode has a boss battle. This can be an entertaining dynamic, but it’s not especially substantial either. There seems to be something more substantial brewing with Milly and Meryl, but 5 discs in, and it’s still just surface level stuff…

Visually, the series has some neat looking designs. The art is good, but the animation isn’t that great. One of the tricks of low-budget animation is to create one large cell drawing, then pan accross it. This gives the impression of movement without actually having to animate the movement. This series uses that technique a lot. Perhaps too much. The series has good music though. Not as good as Cowboy Bebop, but it’s up there.

I can see why this series is popular, but it didn’t especially click with me. I suppose my thoughts could change after seeing the ending, but I’m doubting that. More thoughts and screenshots below the fold. 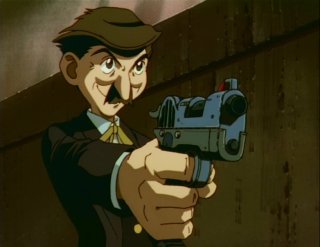 As previously mentioned, the show is a series of encounters with various vaillainous types and encounters with bounty hunters and the like. The series features a fair amount of gunplay, and like Hellsing, it’s often used as an excuse to have cool shots like this with someone pointing a gun straight at the “camera”. 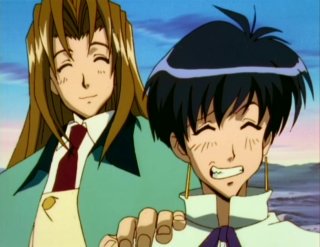 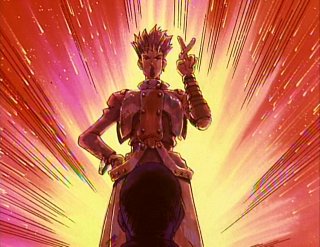 At one point, after defeating his enemies without resorting to violence, Vash makes this symbol with his hand and starts chanting “Peace and Love” over and over again. The hand gesture has a similarity to the “V” peace gesture common in the west, but it’s not the same. His fingers are crossing. I’ve never seen this before… and it doesn’t look biologically feasible either. I mean, I can cross my fingers, but not like that! What’s the deal with this gesture? 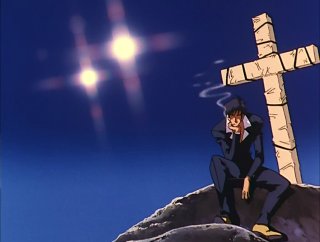 This is Wolfwood. He shows up about halfway through the series. He’s apparently some sort of priest or preacher or something… but you see that cross he’s carrying? It’s really just a big gun rack, which makes one wonder what kind of Church he belongs to. Note also the dual suns in the sky. This planet seems to have two of everything. Well, it has two suns and two moons, at least. Perhaps that’s why the currency is “double dollars”.

As the series progresses, you get more of an idea about Vash and the dark secrets in his past. When he gets cornered by one of the various assassins sent after him, he really puts on his game face and shows flashes of the darkness in his past. He looks a little like Spawn, doesn’t he? 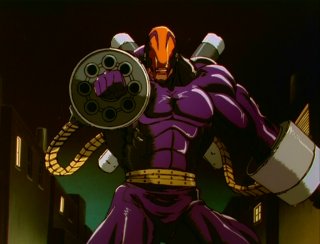 This is one of the aforementioned bossfights… I mean, assassins that is sent to handle Vash, but gets more than he bargained for when he meets up with the Spawn style Vash. 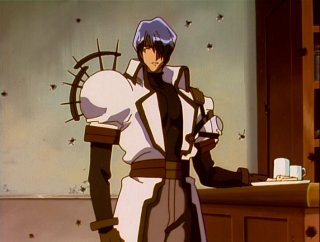 This guy seems to be the main villain. 5 discs in, and I know very little about him, except that he seems to know about Vash’s past, and he has lots of powers. 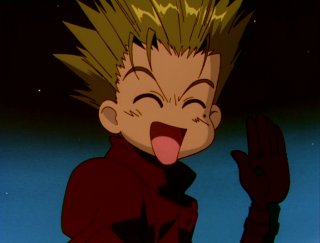 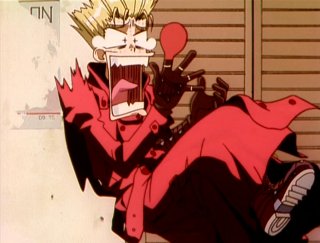 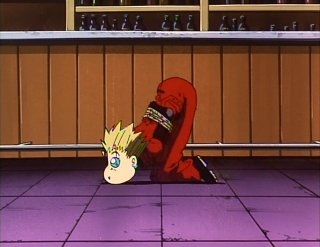 Here is a small sampling of Vash’s many silly faces and the stylized way the series portrays him. This sort of thing always strikes me as odd.

Well that’s all for now. Perhaps more when I finish the series…