I won a Sins of a Solar Empire game last night. It turns out, all I had to do was play on “Easy.” Heh. Actually, I think the thing that really did it was the Pirates. 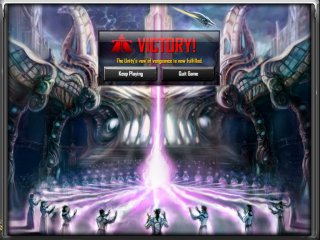 Pirates are a faction in the game that periodically launch raids on one of the players. By default, they pick a random player to attack, but you can put a bounty on your opponents (or, in larger games, you can secretly attack your allies, if that’s necessary), and if you bid more than your opponents, they’ll go bother your opponents. When you’re playing against AI, it’s easy to win the bidding war, and I think that’s primarily why I won this game. Honestly, the Pirates thing got a little annoying after a while. It happens every 10-12 minutes or so, and it’s really annoying to have to deal with a pirate attack. Later in the game, when I didn’t need the pirates, making sure I won the bidding wars was just a pain in the arse. I don’t know if the duration between attacks is configurable, but if it were a longer period, the game would go a little smoother. 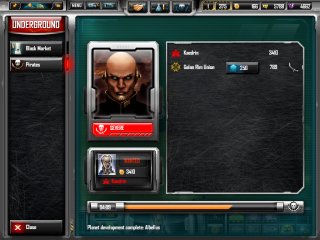 Another thing I noticed that I forgot to mention in my last post was that position is everything. There are choke points in the phase lanes, and if you can block off your enemy at one of those choke points, you can fortify your position and build your empire behind it. In at least one of my previous games, I was in an awful position and had a lot of trouble fortifying my empire. In the below screenshot, I was able to narrow it down to two phase lanes, one of which was blocked by the Pirates (actually, by the time I had taken that screenshot, I had expanded into my enemy’s empire, so while I still had only one planet exposed, there were three phase lanes going into it). Since I was winning the Pirate bidding wars, I didn’t have to worry much about the planet facing the Pirates, so I really only had one planet to worry about. I fortified it with mutiple capital ships and a couple hanger defenses, and all was well. Of course, if someone managed to get past those defenses, I would be screwed, as the rest of my empire was relatively free for the taking. 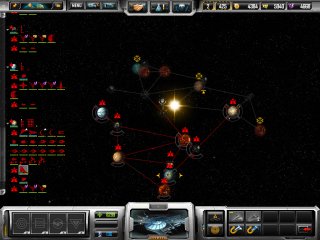 And finally, I found playing with The Advent to be much better than playing with the TEC. Perhaps because I had a better idea of how to use their ships (having been annihilated by them a few times in the past, and thus knowing how to populate my fleet). I still haven’t played with or against the Vasari Empire yet, but I did find their backstory, as described by Brad Wardell (owner of Stardock, and I’m pretty sure he’s also the author of the AI which keeps kicking my ass), interesting. Basically, The Vasari were tremendously powerful, but are now the equivalent of “Battlestar Galactica, a ragtag, fugitive fleet fleeing something horrific.” Interesting. I should try them out sometime. I’ve honestly only played a couple of the many available scenarios, so I’ev still got lots of stuff to go through with this game.

1 thought on “Sins of a Solar Empire: Victory!”