As I made a last minute rush to watch 2007 movies for the recent awards, my netflix queue was whittled down a bit (I’m at a manageable 109 DVDs) and without paying attention to my queue, I ended up getting Ghost in the Shell 2: Innocence in the mail last week. I enjoyed the first film a lot, and after watching the sequel, I ended up with pretty much the same feeling as the first. It’s not perfect, but it is an excellent animated film and it brings up many thought provoking subjects.

The first Ghost in the Shell film has a cult following and is rightly proclaimed as one of the essential Anime films that anyone interested in the form needs to see. It was one of the first to be released in theaters in the U.S., though it has been more successful on DVD than in the theaters. It’s weighty themes and confusing plot turned off some people, but struck me as being fascinating, and it has also captured the imagination of U.S. filmmakers (you can’t watch the lobby gunfight in The Matrix without being reminded a little of the first GitS film, and even the Wachowski brothers have acknowledged the influece of the Anime in their work). 9 years after the first film, this sequel was made.

The story takes place in 2032, and it follows the special officers of Section 9 as they investigate a series of grisly murders committed by gynoids (basically female robots used for, well, take a guess). Many characters from the first film return, including the main protagonist of this feature, Batou. Other members of Section 9, such as Chief Aramaki and Togusa also make appearances. After the disappearance of Major Kusanagi in the first film, Togusa becomes Batou’s new partner (Togusa clearly knows he has big shoes to fill, but he works well with Batou, and as Alex notes, one of the joys of this film is the camaraderie they share) and they trace the murders back to a specific model of gynoid, made by a cyborg company called Locus Solus. It appears they’re doing something strange to their gynoids which makes them more desirable than other models, but also appears to drive them crazy. As Batou and Togusa get closer to the truth, help arrives in the form of an old friend. 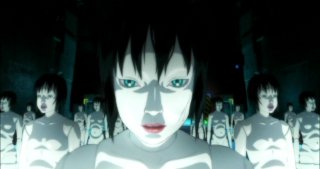 Like the first film, the plot can be a little obtuse at times, and would probably take a few viewings to fully decipher. I get the impression that this whole series loses something in translation, though I obviously can’t be sure. This film is not quite as difficult as its predecessor, but there are still lots of plot twists and complex shifts of perspective. In general, it covers most of the same thematic ground as the first film, but from different angles. The first film was about cyborgs – human beings that were becoming more and more machine – and the philosophical implications of that. I talk about this a little in my review of the first film:

It’s a dense story, and the technological advances pose a ton of intriguing questions about the nature of identity. The Major, whose physical body is almost all machine, is understandably a little paranoid about her identity. Is she really who she thinks she is? Is anyone really who they think they are? What makes me what I am? If my consciousness is transferred into an artificial brain, am I still me? This is the sort of thing that will stay with you long after the film has ended.

The first movie was all about how replacing or augmenting humanity with technology changed the nature of identity. In Ghost in the Shell 2, many of the same ideas are covered, but from the perspective of robots that take on characteristics of humanity (instead of the the other way around). There are a lot of thought provoking ideas here, and once again, I found myself asking lots of interesting questions. At what point does a machine become sentient? What’s the difference between an artificial intelligence and a human intelligence? Are the two compatible? Can you transfer a human consciousness into an artificial construct? And so on. You’ll note a marked similarity between these questions and the ones from the first film, and for the most part, there isn’t much that’s really new here. That said, it’s certainly a subject worth further exploration, and I think this film does a good job of it, making a good complement to the first film.

Major Kusanagi (the protagonist from the first film) makes an appearance in this film, though in an unusual way. Kusanagi and Batou have an interesting relationship. In the first film, it’s clear Batou has a sorta cyber-crush on Kusanagi, but they were both full cyborgs. They retained some of their humanity, I suppose, which is why you can see some chemistry (for lack of a better term) between them, but being cyborgs owned by Section 9 had taken its toll. In the second film, Kusanagi no longer exists within a human form, instead opting to take up residence in a global computer network, but she’s able to download portions of her consciousness to the physical world in some situations, and Batou refers to her as his “guardian angel.” It’s clear that even in their respective forms, one a full-replacement cyborg, the other a disembodied consciousness living in a global network, they retain some sort of attraction. Romantic isn’t the right word for whatever it is, but neither really is platonic (though it could be argued). It’s something new, something different.

While the film explores such weighty topics, it’s all done in the form of an entertaining pot-boileresque thriller with plenty of opportunities for action. It’s maybe a little more fun that the first movie, though both employ this technique. There are some elements of neo-noir, and a lot of references or familiar influences. Asimov’s laws are clearly in evidence, but the most obvious influence is, of course, Blade Runner, and Manhola Dargis makes some interesting comments in the NY Times review of the film:

A study in earth tones and gum-shoe rectitude, Batou is a self-conscious cross between the detective played by Harrison Ford in “Blade Runner” and the runaway android played by Rutger Hauer. Drawn along the same solid lines as Mr. Hauer, Bateau comes clad in the classic world-weariness worn by Mr. Ford, one difference being that Mr. Oshii’s tough guy keeps a basset hound. A floppy bundle of love and slobber, the dog is a link to the ghost (human identity) in Batou’s machinery and, perhaps, as the hagiographic images of the hound suggest, something else.

Mr. Oshii squeezes charming laughs from Batou’s relationship with the dog, but the hound’s more essential function is to circle the film back to the fundamental question of what makes us human. Like Sean Young’s replicant did with Mr. Ford’s blade runner, the dog humanizes the hero and becomes the occasion for some philosophical riffing. 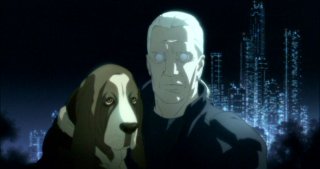 From a technical perspective, the film has made some improvements over the original. It’s much more visually spectacular than the first film (see screenshots in the extended entry for more). This is probably due to the striking mixture of traditional 2D animation for the characters and newfangled computer generated 3D animation for backgrounds (which are breathtakingly complex and textured). In some cases, the illusion of depth was noticeably prevalent (I’m sure there are lots of animated films like that, but there’s something different here that struck me). The film is filled with epic vistas depicting a mix of industrial and classical architecture, and it sometimes feels like you’re watching a painting. The action sequences are more elaborate and entertaining, and the settings are great. The movements of the robots are awkward and creepy, which actually works well. Kenji Kawai did the score for both films, and helps imbue both films with a similar atmosphere. My one real complaint was that the DVD I got was strangely set up: instead of subtitles, it only had an option for closed captioning and thus it includes descriptions of sounds or actions like “Helicopter approaches…” etc… (There was apparently a big controversy when this was first released, as the DVD didn’t include a dubbing either. This has supposedly been fixed in newer versions, but the one I got from Netflix was the closed caption one.) 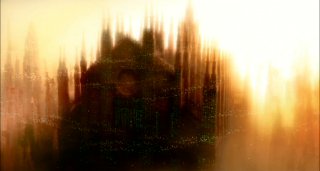 What you end up with is a very well made, intriguing motion picture. It’s not as original as it’s predecessor (obviously… it is a sequel), but it’s still thought provoking and it makes for an interesting companion to the original, further exploring the same themes from different perspectives. If you liked the first film, chances are, you’ll like this too. And if you’re like me, you’ll find yourself asking a lot of interesting questions… *** (three stars out of four)

As usual, more screenshots and comments (and more specific spoilers) below the fold…

Batou is a badass in this film, much moreso than in the previous film. Here he has just fought his way through a throng of killer androids when he encounters Kusanagi, who has downloaded herself into one of the killer androids (incidentally, Kusanagi is still a badass as she demonstrates in the scenes immediately following this one). 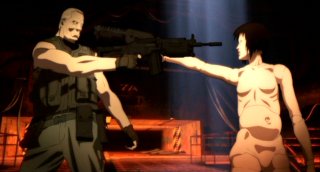 The cars in this movie are inexplicably retro. Of course, the interiors are futuristic (there’s an elaborate “Pursuit Vehicle Checking System” that runs every time they park the car), so perhaps it’s just a future fad or something. 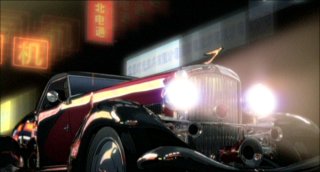 As I mentioned earlier, I got the impression of depth much more than I typically do for animation, and this was one of the first examples. It’s a little hard to tell on a still image, but when Batou is walking down this grimy deserted alley, the feeling of motion and depth is downright palpable (as the NY Times article notes, it’s a “photo-realist alley so authentically derelict that it’s a surprise you can’t smell it”). 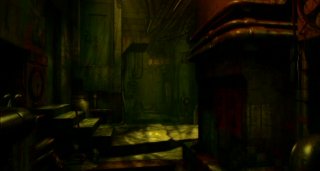 At one point, Batou and Togusa head up north to investigate Locus Solus. There are a whole bunch of gorgeous shots as they fly above the industrial city, followed by a startling sequence depicting a Chinese festival set to Kawai Kenji’s moody score. These are gorgeous landscapes, and there’s a lot more than I’m showing here… 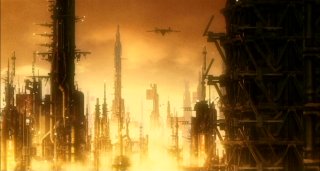 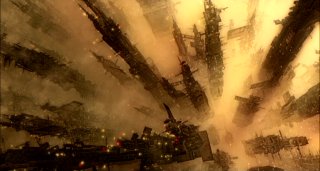 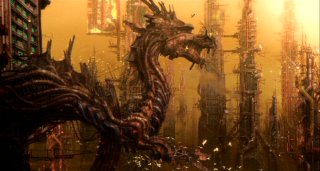 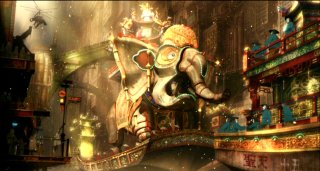 Again, there’s a lot to chew on here, so I could probably go on and on, but this just about wraps it up.

4 thoughts on “Ghost in the Shell 2: Innocence”