Additional assorted thoughts on Cowboy Bebop (see also: Initial Thoughts and The Ending). I’ll have some more thoughts on the ending, but for the most part my opinion of the end hasn’t changed much. As you might expect, spoilers below (I’m putting most of the spoilers in the extended entry though). First, the non-spoilers:

Ok, that’s it for the spoiler free stuff. More screenshots, comments, and spoilers after the link.

Ok, so this one isn’t a spoiler, but it’s funny: 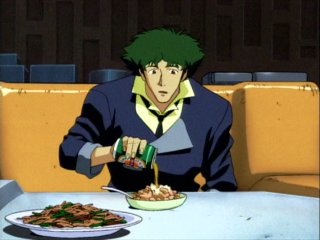 Beer and cereal, breakfast of champions. 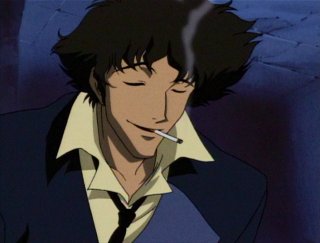 Closed-eyes syndrome continues unabated. In that post, Roy noted an article which said that the Japanese tend to depict emotions with the eyes, rather than the mouth (as we do in the states). This is far from scientific, but there are several indications of this, and one is that happy emoticons in the US are 🙂 or 😀 (which basically depicts a smile), while in Japan, the typical happy emoticon is ^_^ (which looks like closed eyes to me). But I’ve also noticed watching anime that a lot of emotion tends to be put in the eyes, and it’s not just the closed eyes. For instance, then Faye has her epiphany in the shower and runs into Spike, her eyes are quivering. 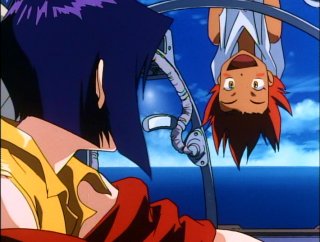 I watched episode 24 again, with particular emphasis on Ed’s story. Steven Den Beste and I disagreed about the character, and I wanted to check it out. While I do think Steven is right to note the indifference of Ed’s character during the mushroom episode, I don’t think it’s really an indication of serious sociopathy (sociopathy is much more apparent in Spike, who has mostly closed himself off from the crew and hasn’t really built any enduring relationships beyond the ones of his past, which haunt him). Ed’s just a kid, after all, and if she was a sociopath, I don’t think she’d have the relationship she did with Faye (who’s sorta like a big sister) and Jet (who’s a sorta father figure). Faye, in particular, seems to have influence over Ed. In the screenshot above, Faye is leaving the Bebop to go back to her family’s home. She makes a big deal about “belonging” there and tells Ed that she belongs somewhere too, and that she should go there. That’s when Ed leaves (note, Ed doesn’t go chasing after her dad when he runs away – she just says “Father person is gone” and then hops back on the Bebop). And before Ed leaves, she gives Spike a little gift (a little wind Toy, which Spike later attaches to the front of Bebop – perhaps he’s not a sociopath after all) and paints a farewell on the deck of the Bebop: 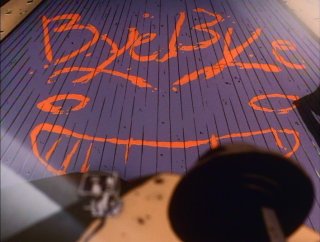 Also, and I’m keenly aware that this is my naive optimism that noticed this, when Ed is talking to Ein during her departure, she says that she’s going “far away” and that she “might not come back.” So that means she “might” come back and she might not. Given that Faye came back, I think it’s possible that Ed would too. Of course, the series doesn’t really give any indication that Faye stays and even less that Ed would be back, but hey, a guy can dream, can’t he? I wonder if a sequel could ever happen? 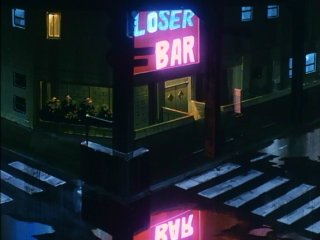 One thing I’ve noticed in a lot of Japanese movies and anime is that English appears often, though in many cases, it doesn’t make much sense. For instance, I noticed several random books in the Read or Die OVA that had titles like Mr Bad Guy or I Can Hear Music, which don’t make much sense from my perspective (or at least, they’re silly), but may add a bit of flavor to a Japanese viewer. So I thought it was funny when Jet and Spike sat down for a drink at the “Loser Bar.” However, the English in Cowboy Bebop was pretty good, so I’m guessing this is just a none-too-subtle commentary on Jet and Spike’s state of mind. 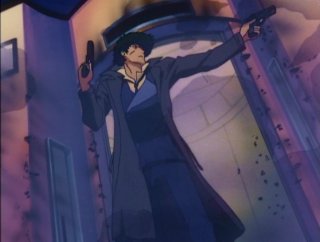 I mentioned in my initial thoughts post that some of the action was framed like a John Woo film, and indeed, a lot of the action in the series seems to be influenced by the Hong Kong action scene. Apparently I’m not alone, as a commenter at Pixy’s site named CPT. Charles notes: “Perhaps I’m imagining things, but I plenty of themes/storylines/hero-villian interactions in Bebop that I have seen before…in HK films. If John Wu would do anime, it would resemble Bebop.” (sic). 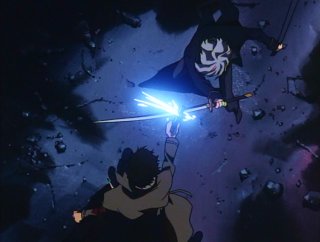 Now this isn’t a HK action trope (at least, not to my knowledge), but the final confrontation between Spike and Vicious has Spike armed with a semi-auto handgun and Vicious armed with a sword. Spike has been shot and otherwise beaten up, so his aim is a little off, and they actually manage to make the fight seem well matched (even though a gun is obviously preferable – right Indy?) 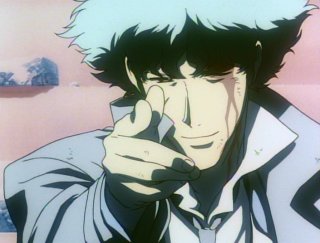 In the comments to the last entry, there was some speculation that maybe Spike isn’t really dead. After all, Spike had endured previous beatings that were just as bad if not worse, multiple times throughout the series (and he gets shot in the head and thrown off a moving train hundreds of feet off the ground in the movie without dying). What’s more is that the series creator apparently doesn’t know whether Spike is dead or alive. However, I find that hard to believe, as the visual aspects of the ending clearly point to Spike being dead. Most people will point to the fading star at the end of the credits, but even the screenshot I posted above implies death. Well, not death, but the saturated, washed out brightness of the shot usually symbolizes transcendence or resolution, and in this case, that means that Spike is dead. To me, at least.

My overall feeling of Cowboy Bebop is that it’s a really good series, maybe even great. There are some things I don’t like about the ending, but other than that, it’s a fantastic series and I enjoyed it more than I did most of my recent Anime viewing. Even though I didn’t love some aspects of the ending (at the very least, depending on interpretations, it’s anticlimatic), I don’t think that really impacts my feelings on the series as a whole (i.e. it didn’t ruin the whole series for me). After all, the series is mostly episodic, and though they feature the same characters and some continuity between episodes, they are isolated enough that the ending doesn’t really affect my enjoyment of the first 23 episodes (and the movie).

Next up: Banner of the Stars (uh oh, the first disc is marked as “Very Long Wait” on Netflix)