More thoughts and screnshots below the fold.

Update: I’ve finished watching the series, and have some preliminary thoughts on the ending. 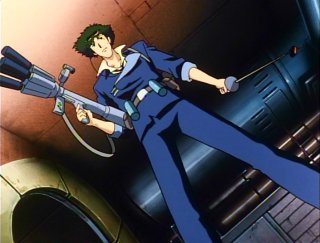 Spike is ready to hunt

This is Spike. If pressed to find a main character, Spike would probably be it. His past is by far the most mysterious, and it also seems to haunt him to this day. I would imagine that his past would be part of the catalyst for the aformentioned sucker-punch. Or not. We’ll see, I guess. Spike has a knack for getting into or causing trouble, and more than once in the series, he gets beaten to within an inch of his life. In the movie Brick, the main character is said to be based on a Dashiell Hammett character whose primary strength wasn’t that he was smart or overly powerful – it was that he could take a beating. Spike kinda reminds me of that, except that he’s a badass as well. So maybe not. Anyway, Spike and Jet are the first characters we’re introduced to, and as the series goes on, they gradually start to pick up other members. First among them is Einstein: 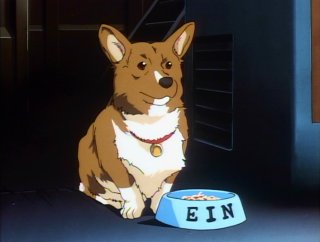 Ein joins the cast in just the second episode, and a big deal is made of his being a “data dog,” yet this hasn’t been mentioned since then. I think perhaps this is something that will need to come up in the next couple episodes. After Ein joins the crew, Spike and Jet run into what is probably the other main character of the series, Faye Valentine: 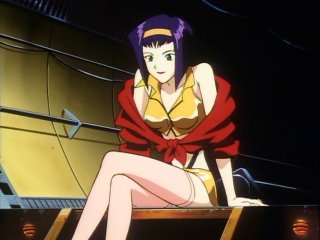 Her past is also mysterious, and she seems to constantly try to distance herself from the crew, yet always finds herself returning. I think perhaps she likes being part of the little disfunctional family of the Bebop, and as the series progresses, you see her begin to fit in a little more with Spike and Jet (who, in turn, seem to fit more with her as well). As a viewer, I want her to stay with the crew, but my expectation of an upcoming sucker-punch makes me think that perhaps that she’ll have a nasty fight with Spike and Jet. We’ll see I guess. Finally, there’s one of my favorite characters from the series, radical Edward. 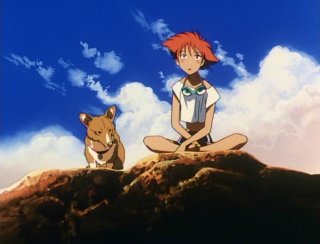 She’s kinda hyperactive (and yes, Edward is actually a she), and is constantly fidgeting around and saying silly things. I’m sure lots of people are annoyed by her (and when I watched the movie, I remember being a bit confused by why the character was acting so weird), but I think she fits in well, and I really like the Mushroom Samba episode (where she hunts down a mushroom toating bounty). 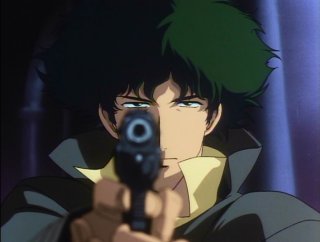 Spike is a badass, and you can tell because the director frames him the same way John Woo frames Chow Yun Fat. Or something. 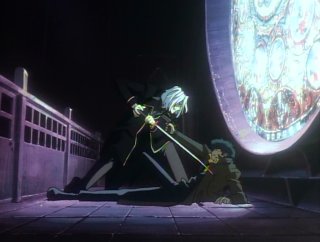 One of the recurring villains is a guy from Spike’s past named Vicious (how’s that for subtlety). Visually, the scene pictured above reminded me of the famous standoff scene between Harvey Keitel and Steve Buscemi in Reservoir Dogs, except one of them has a sword. 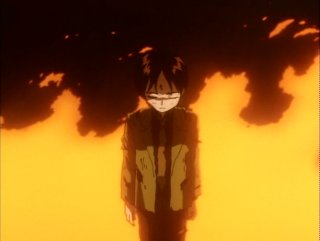 This is one of the aformentioned bounties, and I wanted to call it out because this visually looked like something out of Akira (which is one of the most visually impressive anime movies I’ve ever seen). 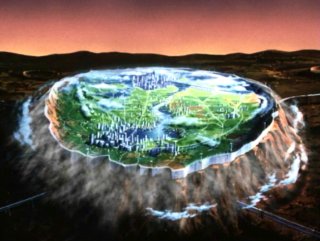 The future that the creators came up with is pretty interesting, and the way they’ve laid out the technology that drives everything is interesting as well. For instance, colonies on the various planets of the solar system aren’t really in domes, but neither did humans terraform the entire planet. Instead, you’ve got these craters that seem to have an atmosphere of their own, but you can see it sorta leaking into the atmosphere of the planet. I have no idea if there’s any scientific basis for this at all, but visually, it’s pretty neat looking. 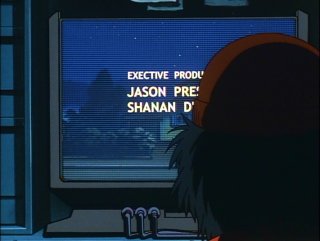 In one episode, Spike and Jet are trying to figure out how to play a video cassete (Beta, no less), so they go to this guy who specializes in it, and he’s watching “20th century TV” and it seems to be a bit of a spoof on Beverly Hills 90210 (note the names, which are cut off, but it’s still obvious who they are). 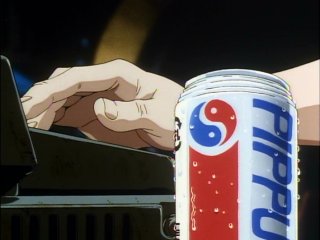 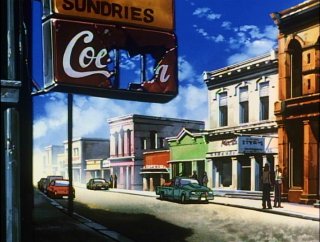 It’s nice to see that the cola war is still in full swing. Pepsi seems to have rebranded as Pippu, but Coke is still itself. And look here, it seems that later in the series, Pippu takes a page out of the Coke design book and redesigns it’s logo with the Coke swoosh: 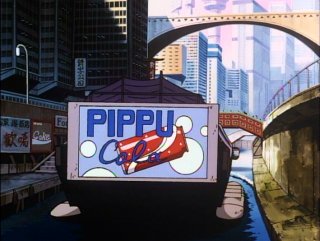 Both Coke and Pippu in one frame there. On that note, I think I’ll call it quits. I took something like 250 screenshots while watching the first 20 episodes, so I’ll post some more in the next post.