So I’ve been exploring the world of Anime, and one thing I’ve noticed is the tendency for characters to close their eyes a lot. Most often, this seems to happen when they get especially happy or giddy and is thus accompanied by a smile of some sort. A character who yells is often animated as having tilted their head back, with closed eyes and an oversized mouth. However, it seems to extend beyond that as well. Often, a character’s eyes will be closed even while delivering normal dialogue. By itself, it’s not all that unusual, but it seems to happen quite frequently in most anime that I’ve watched. Maybe I never noticed it in other animation, but it seems to be much more frequent in Anime than anywhere else. I don’t think there’s anything especially wrong with it, except insofar as I always notice when it’s happening.

There’s apparently a trope for eyes always shut, but that seems to apply to particular characters who never open their eyes:

This describes a character who appears to have their eyes shut constantly, except, perhaps, for a few instances of surprise or shock. Nevertheless, they still give every indication of being able to see – which implies that this characteristic is actually more of a pronounced squint.

This is an old device to imply wisdom; more recently, it’s been subverted as a device to show “wise guys”.

I’m not familiar with any of their examples, but again, I’ve noticed that eyes are closed a lot more often in Anime than in other animation. For example, I’ve been watching Martian Successor Nadesico, and closed-eyes syndrome seems to be operating in full force: 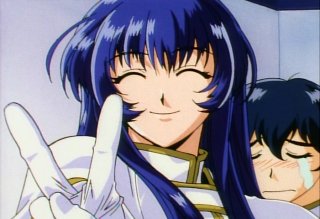 OMG, I’m so happy I simply must close my eyes!

More examples below the fold.

Closed-eyes syndrome was prevalent in Vandread and Vandread: Second Stage as well. Examples below, including one where at least 6 characters are doing the eyes closed thing… 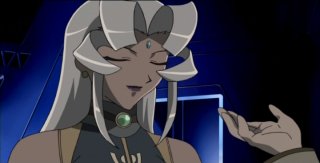 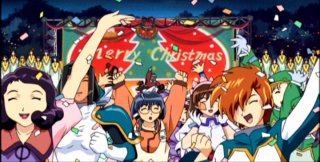 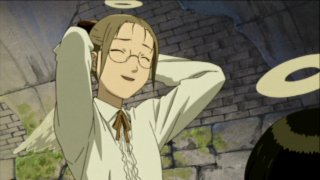 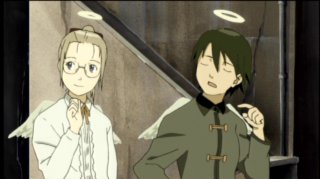 I think that last screenshot is the only one I have that shows someone who is just talking normally with their eyes closed. Most of the other screenshots are of the more common “I’m so happy I’ve closed my eyes” variety, but that’s only because I rarely take a screenshot of random characters talking normally with their eyes closed. I had to dig our my copy of Haibane Renmei to get it, though I’ll note that I was able to pull several screens from the first 5-10 minutes of the first episode.

Perhaps I’m being overly observant, but it’s Wednesday night and my brain is fried and I wanted something easy to write about. So there. I’ve finished the first 2 discs of Martian Successor Nadesico, but unfortunately, I have to wait a little longer for disc 3, as Netflix doesn’t have a copy at my local shipping center (I’m lucky in that I live very close to one of their shipping centers, but sometimes stuff that’s out of print like this series are scattered throughout the country, so it takes a little longer to arrive). It shipped today from NY, so I should get it tomorrow or Friday. I don’t think I’ll be able to finish the series by Sunday, but I’ll probably have an update.

Incidentally, Netflix has lowered their monthy fees again. That’s two times in the last month or so. I don’t especially follow the industry, but I assume this is due to competition from other companies like Blockbuster. The funny thing is that when I saw that price drop, I immediatly thought about how that meant that I would have less access to their “Watch Instantly Online” service (which basically says that you can watch 1 hour for every dollar you pay a month – so I used to have 18 hours of free watching, but now I only have 16 hours). As my friend Dave noted in the comments to a recent post, it seems like an awkward way of determining the viewing allowance. But then, I’m not complaining. I think Netflix should be applauded for simply giving us new functionality for no extra charge. I just thought it was funny that their price cuts also cut their viewing allowance.