I asked for recommendations a while back, and one of the recommendations was a series called Read or Die. The series was universally hailed as being stupid, but some people thought it was a “fun” stupid and enjoyable nonetheless. While I do believe they’re right, I also wish they would have fleshed out some of their ideas a little more. I only watched the OVA (which is only 3 episodes) and not the TV series, so I guess it’s possible that the TV series goes into more detail, but the OVA seemed a little rushed and cramped. At its core, there’s a pretty good story here though, and I did enjoy it.

The premise is that a Special Operations Division of the British Library employs various librarians with superpowers who fight book-related crime. It’s actually a neat sorta mixture of James Bond, super heroes, The League of Extraordinary Gentlemen and… books. Anyway, the story details a particular incident in which clones of major historical figures threaten to wipe out civilization. The details of how these clones were created, who they are, and why they want to destroy the world are glossed over a bit, but that’s because the story focuses more on the relationship between Yomiko Readman (aka Agent Paper, who has the power to manipulate paper – which is more useful than it sounds: she can stop bullets, shoot paper projectiles, among other improbable but clever uses (more on this below)) and Nancy Makuhari (aka Miss Deep, who can make herself intangible and pass through matter – walking through walls and whatnot). It’s reasonably involving, though again it feels a little rushed. 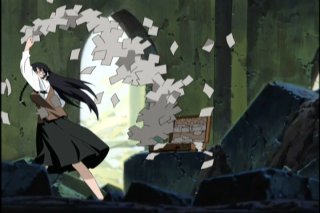 So yes, it’s silly, and there’s lots of Huh? moments that even the most unflappable viewer will think are odd. Still, there’s a certain charm to the flight of fancy that underlies the series. Its the same sort of feeling I get when seeing steam-punk technology (which actually features significantly in this series as well, so it makes sense). After an initial confused reaction, I generally found myself amused at these episodes, such as when Yomiko creates a paper airplane so that she can chase after one of the villains (who’s flying a jet): 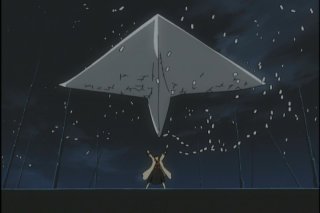 Yeah, it’s absurd, but it’s fun, and the action sequences are actually well staged and quite entertaining. As previously mentioned, the writers did a good job coming up with clever ways to use paper as a weapon or shield or whatever. Most of the villains don’t have much of a back story, and their powers are sometimes a little over-the-top, but that ends up being fine. 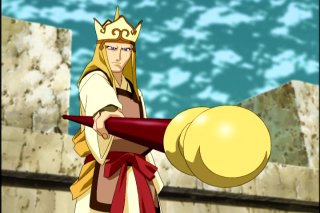 The animation is pretty good and the music is fantastic (it’s got a very Bond-esque feel to it). Overall, it’s entertaining and fluffy, and there’s nothing wrong with that. I’d like to have seen some of the villains and the story fleshed out a bit more, but that’s surprisingly not much of an issue. It’s just good old fashioned mindless fun (which was actually good, considering my busy schedule of late). Thanks to Roy and Wonderduck for the recommendation. As usual, more screenshots and comments below the fold.

This is Drake, the third member of the team (along with Yomiko and Nancy). He doesn’t have any superpowers though, and seems to be a bit of a third wheel, though he appears to come into his own towards the end. The role of regular, non-superpowered folks is a bit strange, especially when it comes to the military. Huge amounts of military power is neutralized and destroyed several times throughout the film, and the US president is portrayed as something of a weenie. When confronted with the destruction of a helicopter fleet, for instance, he literally falls to the ground and wets himself. This seems a bit out of place, but it’s a minor quibble. 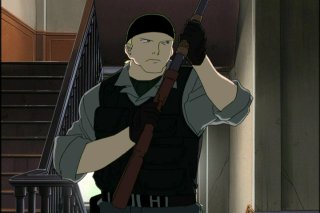 As previously mentioned, they come up with lots of ways to use paper, as in this paper parachute or a paper sword: 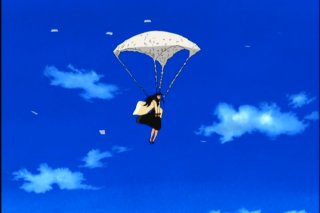 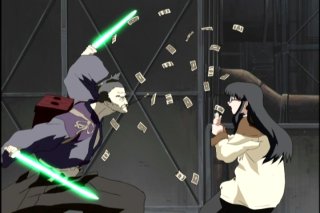 There are lots of books in the movie, and occassionally some of them are rather strangely titled in English. Who could forget such riveting titles as Mr Bad Guy, I Can Hear Music, or At Tha Close of the Century… 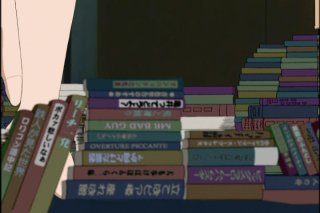 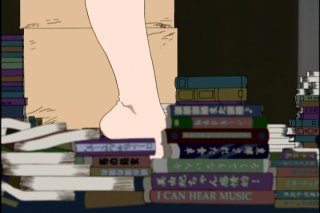 And finally, here are some pictures of the striking Miss Deep herself, Nancy Makuhari. She’s a badass. 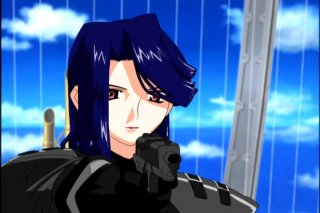 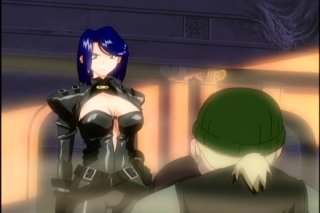 That’s all for now. Not sure what’s up next in the Anime realm, but I’ll blog it when I watch it. In the mean time, I’ll be working through season two of The Venture Brothers, and will be catching up on some of my live-action viewing:P