As requested, a review of Vandread. I finished the first series this week, and I must say that I’m quite pleased (this is in line with my initial thoughts). The first series doesn’t answer all the questions that were raised and the story isn’t complete, but it answers some and provides a great, satisfying finale. It’s a big, spectacular battle sequence, but the reason it’s satisfying has little to do with the action (though that’s fun too).

It occurrs to me that I haven’t actually described the story much yet. Sometime in the future, men and women seem to have segregated themselves on separate planets, and for three generations, a war has been waged between the sexes (apparently, in this future, technology provides a means to reproduce which does not require interaction between the sexes). It’s a little unclear why this rift exists, but it does, and it is exacerbated by propaganda depicting the opposite gender as monsters or worse. Hibiki is a mechanic that works on Vanguards (giant fighting robots or mechas), and as part of a dare, he attempts to steal one off a ship that is launching. Of course, he gets stuck on the ship, which is promptly attacked by women pirates. During the course of the battle, the ship takes moderate damage, but its core power generator has some rather nifty automatic repair mechanisms that sorta run haywire, merging the men’s ship with the women’s ship and transporting them far away. Hibiki and two other men are stuck on the ship with a bunch of women, and to make matters even worse, they seem to have stumbled into a new, unknown enemy that attacks on sight. Who are these new enemies, where do they come from, and what do they want? And can the three men work hand in hand with women to defeat this mysterious foe? 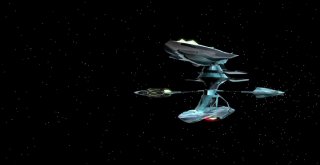 The male & female ships are merged into this ship, dubbed Nirvana

In general, the series has a lot of action, but the focus is pretty squarely on the characters. There are a few standouts who get the majority of attention, but many of the side characters are also interesting and likeable. The main characters are Hibiki and Dita (one of the female pirates), and their relationship has grown pretty steadily throughout the series to a point where they’re both acknowledging that they kinda like each other. Hibiki has had the clearest character arc so far and I think the ending of the first series is satisfying because of the way Hibiki handles the final battle. The story of the series doesn’t end, but Hibiki has definitely changed, and for the better. He was a bit of an annoying loudmouth at the beginning of the series, but he has grown, and it’s been handled well. Again, many of the characters are likeable (though not all – I’m not a huge fan of Jura or Barnette, but that’s only a minor beef, and I’m pretty sure they capture what the writers were going for anyway), and there are many little subplots and relationships that are entertaining and fun. My favorite subplot was the Christmas episode. I’m a total sucker for Christmas stories, and I absolutely loved that episode. (Screenshots and more comments on this subplot below the fold.) I’m guessing that some of these characters will be fleshed out a little more in the Second Stage (the stoic male doctor Duero and the female engineer Parfet will continue to flirt, Bart might actually become something of a leader and maybe get with BC, and Meia, well, I’m not sure what she’s up to, but I think she’s an interesting character.) 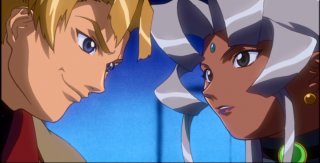 The animation is pretty and the action sequences are well executed. I mostly watched the series with dubbing on, though I took a gander at the subtitles as well (as I’ve noted before, I’m interested in the differences between translations, and will still occassionally watch a series with english dubbing and subtitles on at the same time). I haven’t settled on which is better in general, but the dubbing on this series wasn’t bad at all, so I ended up sticking with that for most of the series. The translation seems a bit funny at times (dialogue that is supposed to be witty banter or sound inspirational sometimes fall a little flat), but the general idea always gets through. The music is serviceable, but not great (I’m just spoiled by Yoko Kanno, I think). All in all though, it seems to be pretty well produced.

The story still has a fair share of open questions, but again it seems to be progressing nicely and I’m looking forward to watching the Second Stage. The series is clearly episodic with an overarching story underlying everything. This works well, as the episodic content allows the writers to develop the relationships between the characters. Lots of jokes are made exploring the differences between the two sexes, and it’s quite fun. The ending of this first series was great, though I can’t imagine getting that far and not wanting to watch Second Stage. The series was pretty much exactly what I expected, and it seems like it’s got a lot of the steriotypical Anime tropes, right down to the way the characters (i.e. faces, hair, clothes) are animated. Everything looks somewhat familiar, but not (I could swear I’ve seen half of these people before). For a beginner like myself, this definitely isn’t a bad thing, and it seems like a pretty good gateway drug. There are some aspects of the plot that might seem strange upon closer inspection, but I don’t seem to be getting hung up on nitpicks or anything. It’s funny, but corny stuff that might normally bother me doesn’t seem to be doing so with this series…

Again, I’m very much looking forward to the conclusion of the story, which I assume happens in the Second Stage. Thanks again to Steven for the recommendation… this is just about exactly what I was looking for.

More screenshots & commentary below the fold…

As mentioned above, the character of Hibiki grows a lot as the series progresses, and it becomes clear that something has changed when he sits down and attempts to develop a plan to save the ship. It shows that he’s developed a more serious and thoughtful side, and his actions have more meaning than they did before. It’s a great moment: 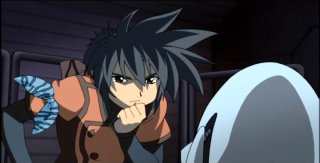 Men have developed fighting machines called Vanguards, which are pretty straightforward-looking mechas. Women have more traditional fighters called Dreads. The Vanguard that Hibiki uses has the rather odd ability to temporarily combine with the Womens’ Dreads, thus creating something entirely different: the titular Vandread: 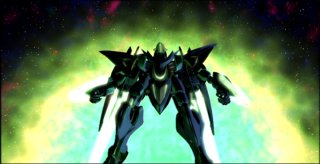 There are actual several different varieties of Vandread, depending on which Dread Hibiki combines with (there’s a lot of male/female awkwardness as the women, especially Jura, attempt to vie for combination with Hibiki, who just wants to be left alone.) One of the nitpicks that would probably bother me about the series if I didn’t like it so much is the actual process of this combination. Every combination basically shows the Vanguard popping into a Dread, then everything just changes, and the two pilots are suddenly thrust together in a single cockpit. It’s something that might be annoying, but strangely isnt. Here’s Hibiki and Dita after combining: 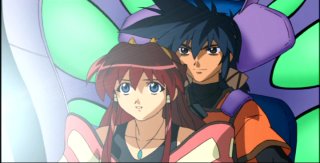 How’d they end up in the same cockpit?

A while ago, I wrote about Lain’s Bear Pajamas (from Serial Experiments Lain) and found out that it’s actually something that’s relatively common in Japan. They’re called Kigurumi, and it appears that a member of the female crew is so grossed out by having men onboard her ship that she sequesters herself in a little bear costume so she can avoid having to deal with them looking at her (or their smell). I’m not sure what the deal is with the “Be Out” sign that she’s wearing. She clearly doesn’t like the men, and the series is riddled with strange english labels (on equipment or computer screens – they often only make partial sense), so I’m guessing it means that the guys need to be kicked off the ship or otherwise kept out of her way. 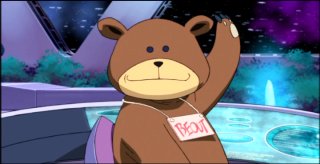 The mysterious enemy ships are varied and have interesting designs. Here’s one from the Christmas episode: 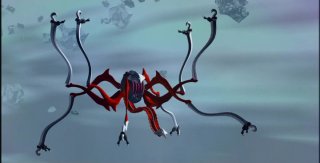 And speaking of the Christmas episode, here are some other pics. The crew perks up around Christmas and goes nuts decorating the ship, putting up a huge Christmas tree, and preparing gifts for each other. They’re also passing by a huge comet, which makes for a strangely appropriate atmosphere (and it comes in handy later in the episode). The men have no idea what Christmas is, and so they have to figure it all out and get their female counterparts a last minute gift. It’s interesting because it’s one of the later episodes and the characters are becoming better developed, and this gives them a chance to relax (sort of). As previously mentioned, I’m a sucker for Christmas stories, and this is a fantasic episode. 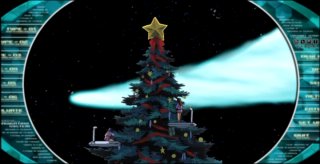 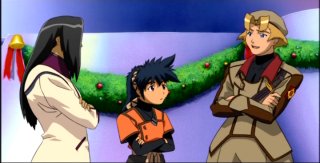 Duero, Hibiki and Bart try to figure out this Christmas thing 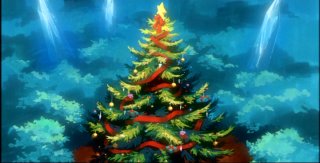 Lighting the tree. Did I mention it’s a huge tree?

Dita’s gift to Hibiki is awesome. I must find a way to work this picture into Christmas this year (and, hmmm, isn’t December 25 some other holiday?) 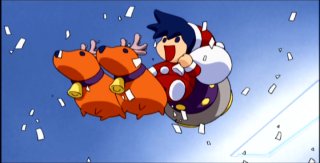 The series also has its fair share of spectacular visuals. Some of the big battle sequences are difficult to capture in a single screenshot, but here’s a nice big explosion: 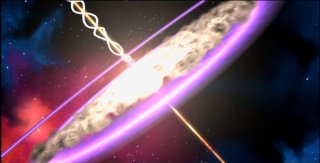 That’s all for now. I’ll be starting Vandread: Second Stage this week, and I might even be able to finish it by next weekend. However, I’ve got a busy schedule at work this week, and the Philly film festival starts next week. Gah. To much to do, and too little time.