So I’ve seen the first 8 episodes of Vandread, and I should be finishing the first series early this week. So far, it’s pretty good. I’m holding off on pronouncing any final verdict until I reach the end, but I have to admit that I’m enjoying myself so far and I’m kinda looking forward to a long-term story that has an actual ending.

American TV has recently experienced an explosion of the sprawling, multi-season story. This has been bolstered by the emergence of the TV DVD market, which makes it possible to catch up with a series really quickly. The problem is that I honestly think this Writers of Lost parody is a fairly accurate representation of what goes on in the writing office for some of these series. I gave up on Lost after watching the first season on DVD and I won’t watch another episode until someone tells me there’s a definite ending and that it’s a good ending that actually makes sense. I actually enjoyed watching the first batch of Heroes episodes, but I get that same sorta feeling that the writers are just screwing around and making it up as they go along. As Dalton Ross writes in a recent editorial in Entertainment Weekly, “As much as I love all the drawn-out mysteries and soap opera shenanigans, there’s something I crave even more — closure.”

This is one of the things about Anime that really appeals to me. I’m sure there are a bunch of ongoing series, but it seems like a lot of the series have definite ends, and thus have good, long yet concise character arcs, etc…

Vandread has its share of mysteries and open questions (especially in the first couple of episodes), but the series has progressed nicely, and I’m looking forward to the ending. Indeed, I already put Vandread: Second Stage in my Netflix queue. If the ending of the first series stinks, I can always remove it, but I don’t anticipate any major issues.

As usual, I’m noticing little bits and pieces of culture that I’m not familiar with. For instance, when Dita first encounters Hibiki, she makes some sort of greeting gesture with her hand (I added screenshots in the extended entry below). Dita appears to be a UFO nut, so maybe that gesture is some sort of universal greeting or something (like the lights and tones at the end of Close Encounters). Hibiki returns the gesture (further supporting the universal greeting theory), and then promptly runs away. Did I mention that in the Vandread universe, men and women have segregated themselves to different planets and are pretty much at war with one another? I thought this was a little strange, but it makes for some interesting dynamics (and I’m sure it will play a role in the progression of the series). 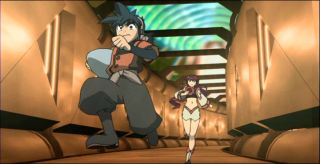 More screenshots & comments in the extended entry below…

When Dita first encounters Hibiki, she makes a greeting gesture with her hand, like so (the small pictures are kinda hard to make out, but if you click on the image you can get a bigger version): 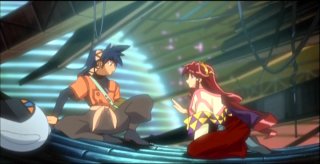 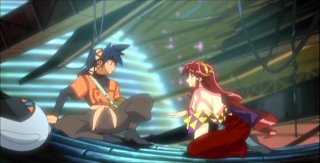 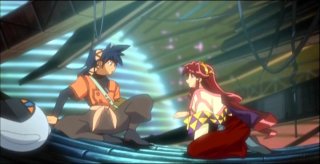 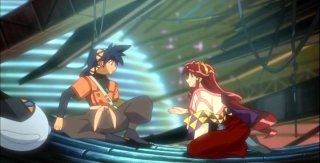 A stunned Hibiki then returns the gesture: 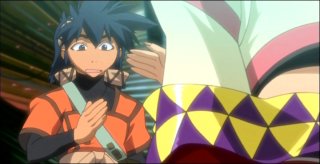 Again, I’m assuming this is some sort greeting, though I’ve never seen it before.