One of my favorite board games is Risk. I have lots of fond memories of getting annihilated by my family members (I don’t think I’ve ever played the game without being the youngest person at the table) and have long since mastered the fundamentals. I also hold it responsible for my early knowledge of world geography and geopolitics (and thus my early thoughts were warped, but at least I knew where the Middle East was, even if the map is a little broad). 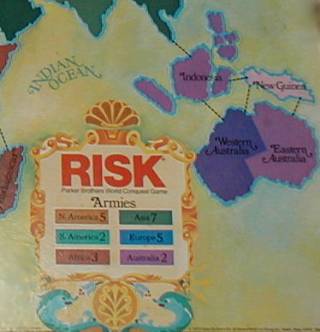 The key to Risk is Australia. The Greeks knew it; the Carthaginians knew it; now you know it. Australia only has four territories to conquer and more importantly, it only has one entrance point, and thus only one territory to defend. Conquering Australia early in the game guarantees an extra two armies a turn, which is huge at that point in the game. Later in the game, that advantage lessens, but after securing Australia, you should be off to a very good start. If you’re not in a position to take over Australia, South America will do. It also only has four territories, but it has two entrances and thus two territories to defend. On the bright side, it’s also adjacent to Africa and North America, which are good continents to expand to (though they’re both considerably more difficult to hold than Australia). This being the internet, there are, of course, some people who have thought about the subject a lot more than I and developed many detailed strategies.

Like many of the classic games, the original has become dwarfed by variants – games set in another universe (LotR Risk) or in a futaristic setting (Risk: 2042) – but I’ve never played those. However, I recent ran across a little internet game called Dice Wars. It’s got the general Risk-like gameplay and concept of world domination via dice, but there are many key differences:

The game’s familiar mechanics make it easy to pick up, but the differences above make it a little more difficult to master. Here’s an example game:

Of course, I’d already played a bit to get to this point, and you can probably spot my strategy here. I started with a concentration of territories towards the middle of the map, and thus focused on consolidating my forces in that area. By the time I got to the screenshot above, I’d narrowed down my exposure to four territories. I began expanding a to the right, and eventually conquered all of the green territories, thus limiting my exposure to only two territories. From there it was just a matter of slowly expanding that wall of two (at one point I needed to expand back to an exposure of three) until I won. Another nice feature of this game is the “History” button that appears at the end. Click it, and you watch the game progress really quickly through every battle, showing you the entire war in a matter of seconds. Neat. It’s a fun game, but in the end, I think I still prefer Risk. [hat tip to Hypercubed for the game]

5 thoughts on “World Domination Via Dice”