So the animation marathon was on a bit of a hiatus, as I was pretty much playing along with the Filmspotting guys, and they got caught up in best-of-2006 lists (like me) and film festivals (not yet for me, but the Philly fest is in April). They started up again last week, and will be finishing up on Friday. I’d already seen the last two films in the marathon, but unlike the other ones I saw before (Akira and Ghost in the Shell) my opinion of these has not changed much (they’re just as good as before). As such, I won’t be spending a ton of time on either one… but I think these are the two most enjoyable films in the marathon. There will be one more post after this one, wrapping up the marathon (though I have a sneaking suspicion that this will not be the last of animation on this blog). Without further adieu, here are the last two films in the marathon (these reviews will be considerably less spoiler-laden than other marathon reviews).

Here are a few other screenshots from The Iron Giant. Again, possible spoilers ahead. 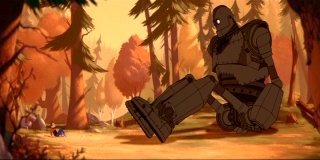 The Giant is practically a child, so it makes sense that he’d make friends with another kid. 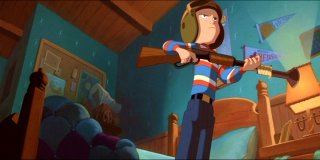 What do you do when you hear something suspicious in the middle of the night? Put on your army helmet and tape a flashlight to your BB Gun, of course! 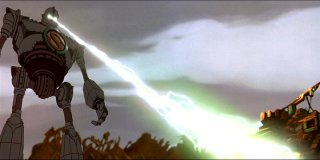 The Giant isn’t all smiles, all the time.

Let’s just say you won’t want to get on the Giant’s bad side: 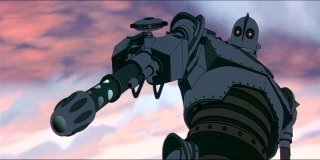 That’s about it for now.

5 thoughts on “Animation Marathon: Spirited Away and The Iron Giant”